It’s Always Dangerous to Believe in the Bills 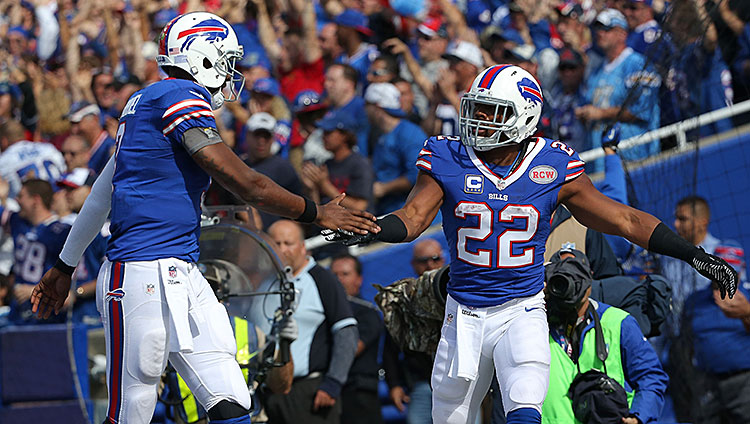 This all started in July. Grantland was having its preseason football meeting, and somewhere in the middle, I blurted out, “What about the Bills this year? Maybe a sleeper team?” I don’t know whether I was serious, but it was definitely treated as a joke. Nobody believed in EJ Manuel, or the Bills offensive line, or the Bills defense without Kiko Alonso.

Then the season started with an upset win in Chicago, the team was sold to the one owner who would definitely keep them in Buffalo, and the Bills went out and beat the Dolphins at home. The day after the Dolphins game, someone emailed me and said, “You should go to Buffalo on Sunday.”

On Sunday morning, I was standing on the corner of Abbott Road and Southwestern Boulevard, when someone brushed past me yelling, “Let’s Goooooo Buffaloooooooo … Wake the fuck up!”

OK! Most of the tailgate lots were already full when I pulled up to the stadium at 9:30 a.m. It was gray and drizzling rain to start the day, but it was warm, so I wasn’t complaining.

Williams, the Bills’ third receiver and a Buffalo native traded here from the Bucs in the offseason, laughed and shook his head as he pulled up his pants and kept running. He was late enough that he had to park in a lot a half-mile away from the stadium and jog through the rest of the traffic in his team gear. Others picked up on it, and everyone pointed and toasted to him as he jogged toward the locker room.

People were in a good mood Sunday morning. It was a welcome break from everything else that’s engulfed the NFL for the past few weeks. We’ve had nonstop miserable news around the rest of the league, but you’d never be able to tell while walking around tailgate lots in Buffalo. While a hundred think pieces wondered when people would stop loving football, it took about 10 minutes in Buffalo to realize the answer, for Bills fans, is probably “never.”

The first two weeks of pro football may have been miserable for the league as a whole, but it’s hard to imagine a better few weeks for this fan base. The winning helps, obviously, but the news of Terry Pegula buying the team put an official end to years-long speculation this franchise would leave Buffalo.

These fans had to endure endless rumors about their team relocating to Toronto or Los Angeles. There was talk of a sale to Jon Bon Jovi, and even some half-assed Donald Trump chatter, just to add insult to injury. Instead, they lucked into an owner who loves the city and has plenty of money to spend. So the team that Ralph Wilson bought for $25,000 in 1959 goes for $1.4 billion to a natural gas tycoon.

This is why “Pegulaville” signs dotted all the tailgate lots, and right next to the bootleg “SAN DIEGO SUCKS” apparel, there were light blue Pegula shirts, or others in white, that said “Savior.” It’s also why this Bills season feels like a win no matter what happens. Everything’s a success compared to a future with Jon Bon Jovi and Toronto.

Plus, you know, there’s been actual success this year. 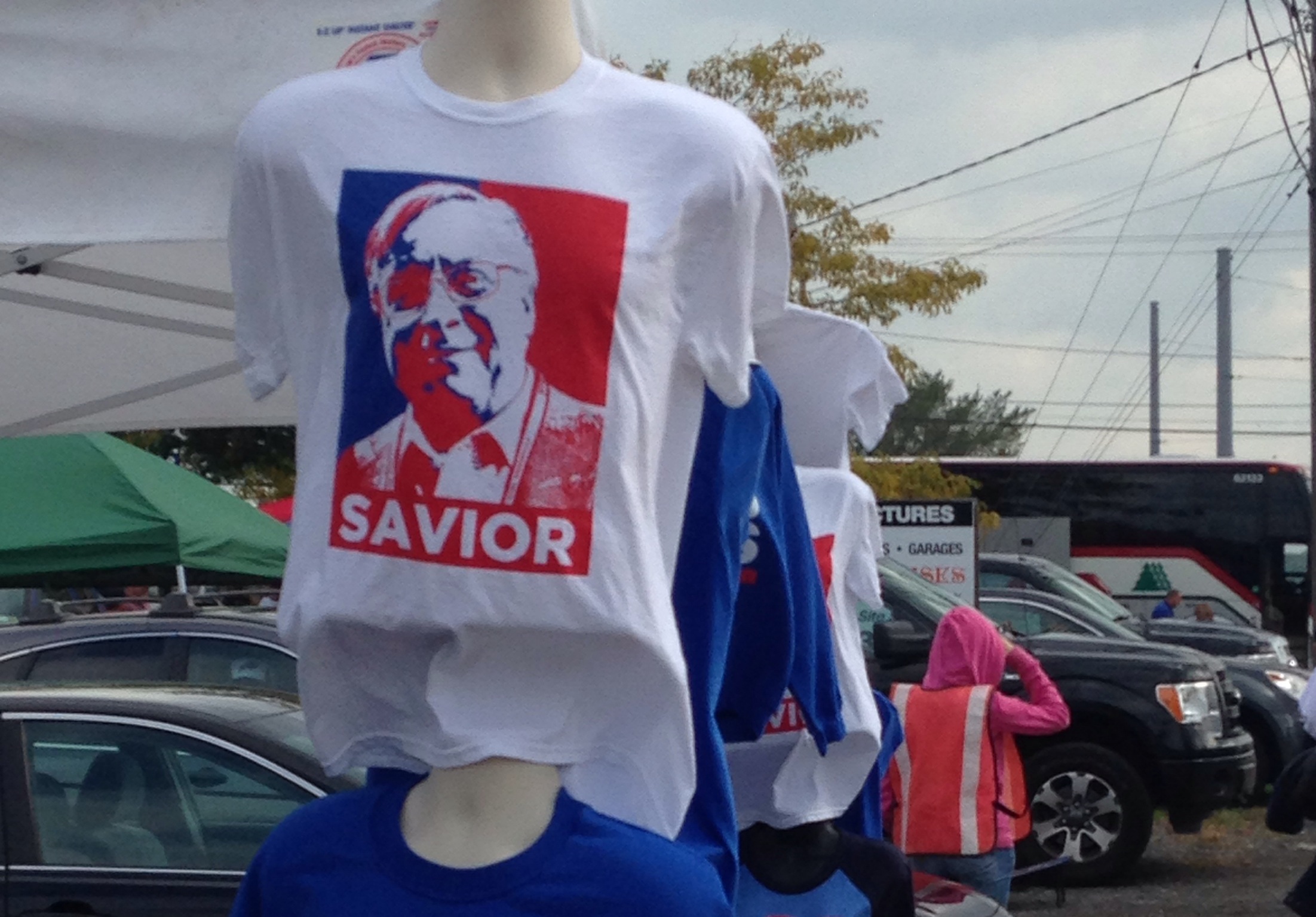 That’s where it gets dangerous. It’s why I wasn’t sure I wanted to come up this weekend. The Bills always do this.

A few years ago, Grantland went in depth on Buffalo and the Bills with Ben Austen, and it included this note:

After last year’s win [over the Patriots], the fans remained in the stadium for 40 minutes; security ringed the field while groundskeepers preemptively took down the goalposts. Fred Jackson lofted a Bills flag and raced across the turf. The Bills were 3-0 at that point and had vanquished their nemesis. Buffalonians started debating who among them were the diehards and who were the Johnny-come-lately bandwaggoners. Bills management quickly worked out a six-year, $59 million contract extension for their quarterback, Ryan Fitzpatrick, who was with his third team and had tossed almost as many career interceptions as touchdowns. The Bills ended up losing 10 of their next 13 games.

They finished 6-10 that season.

Even last year, they nearly upset the Patriots in Week 1, and went 2-2 through September with wins over the Panthers and Ravens. Manuel had been a horrible reach in the first round, but he actually looked pretty decent. Things were looking up. Then they lost eight of their last 12, and … yep, 6-10 for the fourth time in five years.

People know about the four consecutive Super Bowl losses, and even if you don’t know the exact date the Bills last won a title (1965, in the AFL) you know it’s been a really long time. The Bills haven’t made the playoffs since 1999. It’s the suffering that’s made Buffalo football famous. But now we have this new twist, with September hope making the eventual heartbreak even crueler.

So I was already wary of a letdown Sunday. Or actually, “wary” is the wrong word. It was more like dread.

Weaving through tailgates on the way into the stadium, I passed a father and his tiny daughter in matching Bills face paint, hundreds of brand new Sammy Watkins jerseys, and a guy in an “Infredible Hulk” Fred Jackson T-shirt that I almost offered to buy off his back. Spirits were high across the board, the sun was coming out. I didn’t want to watch it all fall apart for these guys. 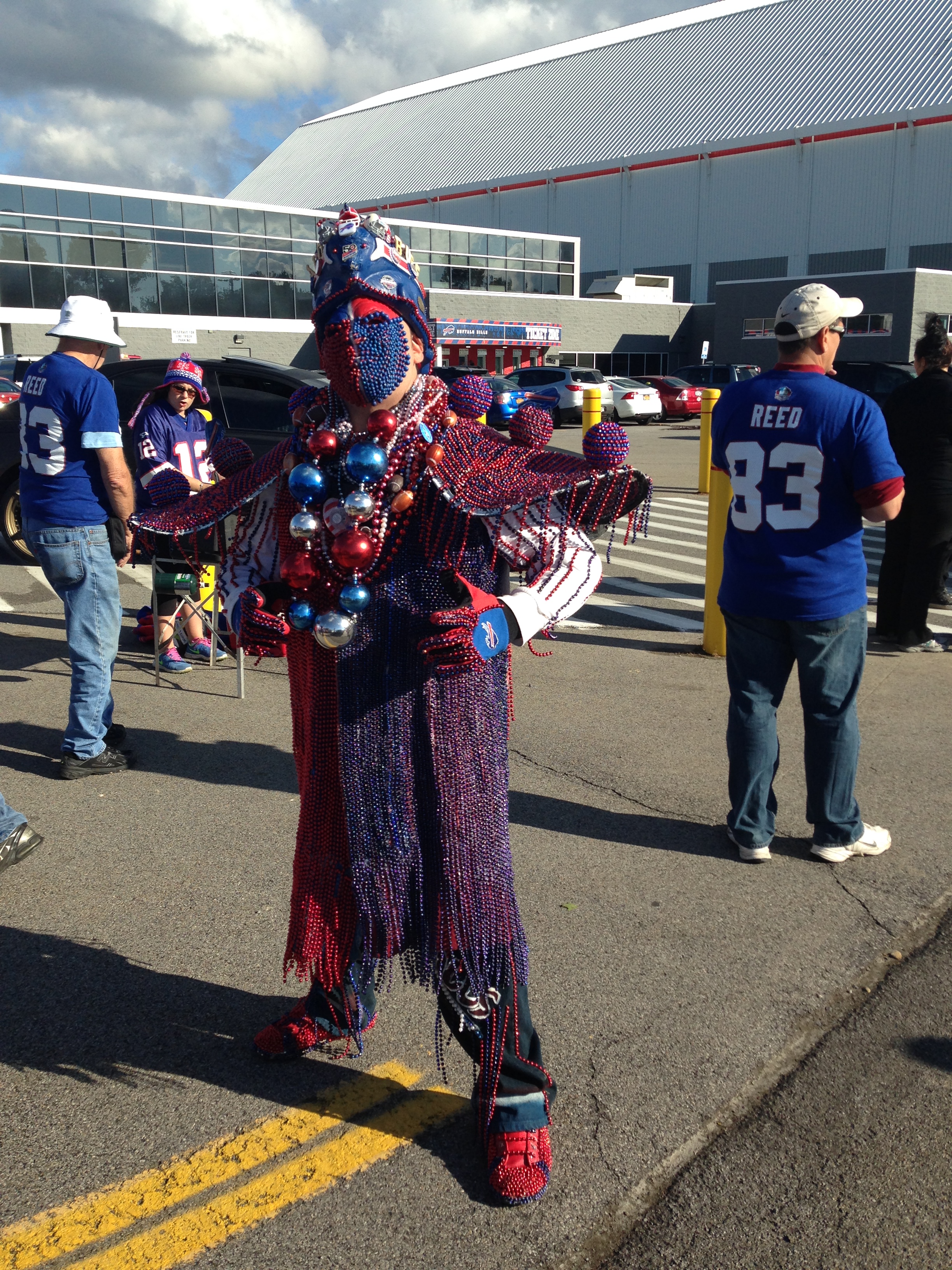 Then Philip Rivers happened. And so did EJ Manuel.

Rivers didn’t make it look that easy all day, but it felt like he could’ve if he had to. He was picking apart the Bills secondary — especially Leodis McKelvin — for most of the afternoon, including a handful of third-down throws that were especially deflating. The Bills defense was able to hold up in the red zone to keep things from getting out of hand, but even with San Diego’s top two running backs sidelined, Rivers was surgical on scoring drives.

The Bills were a different story. When Manuel can hand it off and throw screens to protect a lead, he’s perfect. When he has to step back and hit receivers like he needed to Sunday, the ball flies behind Robert Woods or hits a wide-open Watkins at his feet. Poor Marquise Goodwin almost got killed trying to catch a crossing route in the second half.

It’s frustrating, because for every three “EJ NOOOOOOOOOOO” moments, there’s a play like the one in the middle of the second quarter, when he wiggled through two defensive linemen and extended the play long enough to hit a wide-open tight end for 37 yards. But then, three plays later, he forced a throw to the end zone that went through a cornerback’s hands.

I don’t know if anyone ever needs a reminder of how important quarterbacks really are, but this Chargers-Bills game underscored it for both sides. In the postgame press conference, a reporter asked coach Doug Marrone how teams go about correcting quarterback accuracy issues during the season, and then things got tense for a second.

“Ummm. He was … 18 for 25, right? You saying our quarterback, or anyone’s quarterback? I’m just asking, what do you think the problem is with his accuracy? What’s his completion percentage?” He shrugged. “He’s gotta get better like everyone else. I don’t see it being a major issue. That’s not the reason we lost this game.”

Maybe the Bills didn’t lose the game because of Manuel, but he didn’t give them a chance to win it, either. His passing numbers were actually 23-of-39 for a respectable 59 percent. But he completed just 33 percent of his passes when throwing to wide receivers, for 2.3 yards per attempt. That seems like it could be a major issue.

There were still things to like about the Bills on Sunday. Namely, Fred Jackson. Almost every Jackson run ends with him lowering his shoulder to destroy some helpless defensive back. That Chris Conte play in Chicago was not a fluke. He’s the kind of football player who reminds you why you love football.

The best example was his touchdown catch in the third quarter, when he caught a quick screen from Manuel, weaved through traffic for eight yards, and then lowered his head to run right over Eric Weddle into the end zone. Like, stepped on Weddle’s chest on his way to the goal line. And then he did the Hulk move. 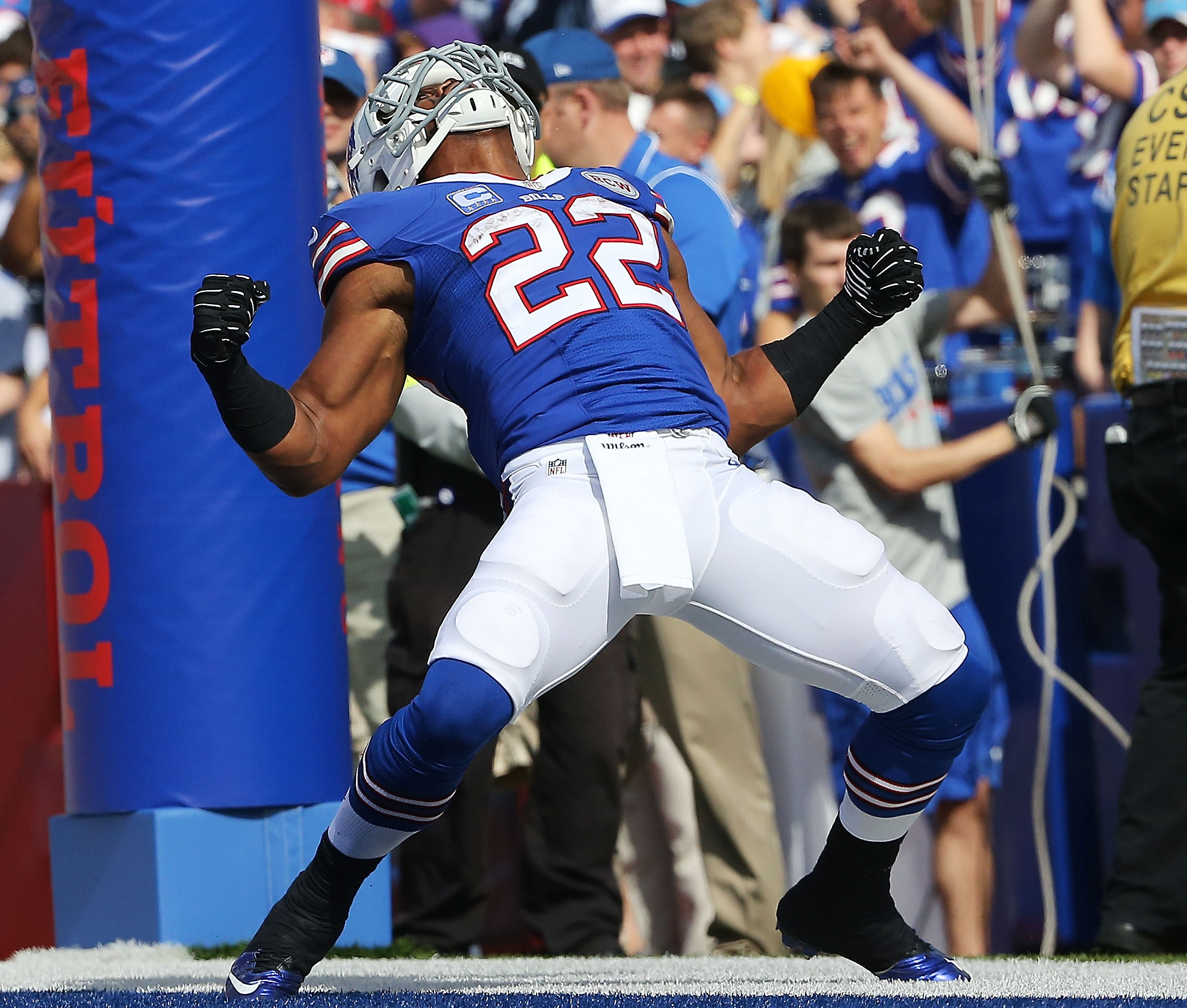 The Bills play the Texans next week, in Houston, and that feels like it could dictate where the season goes for both teams. Both are 2-1 after losses Sunday, and this year’s token overachieving team could be either one of them. It probably can’t be both, though.

Should you believe in the Bills? Of course not. The issues with Manuel are real, the offensive line is still a question mark, and the past 20 years would be enough to scare any outsider away.

But there’s real talent on both sides of the ball. Watkins is a monster, Woods can be just as dangerous, and the combination of C.J. Spiller and Jackson will be miserable to stop all year. The defense can stop the run and attack quarterbacks with a killer line, and it will be good enough to keep the Bills in every game. Williams is a pretty forgettable third receiver, but he’s also my favorite receiver in football after watching him hustle through the rain at 10 a.m.

Doubting the Bills is easy, but it also misses the point. The whole reason we watch sports is to see incredible things happen, and after a solid decade of the same miserable story playing out, a good Bills team would be as incredible as anything.

The good news is real in Buffalo right now. Maybe there really will be a new era. You never know. Sunday’s loss will have plenty of people doubting this team all over again, but as Jackson told reporters after the game, “It’s Week 3. You don’t overreact.”

I trust the Infredible Hulk.

I know I shouldn’t believe in the Bills. Nobody should. But that’s what makes it impossible to root against them.