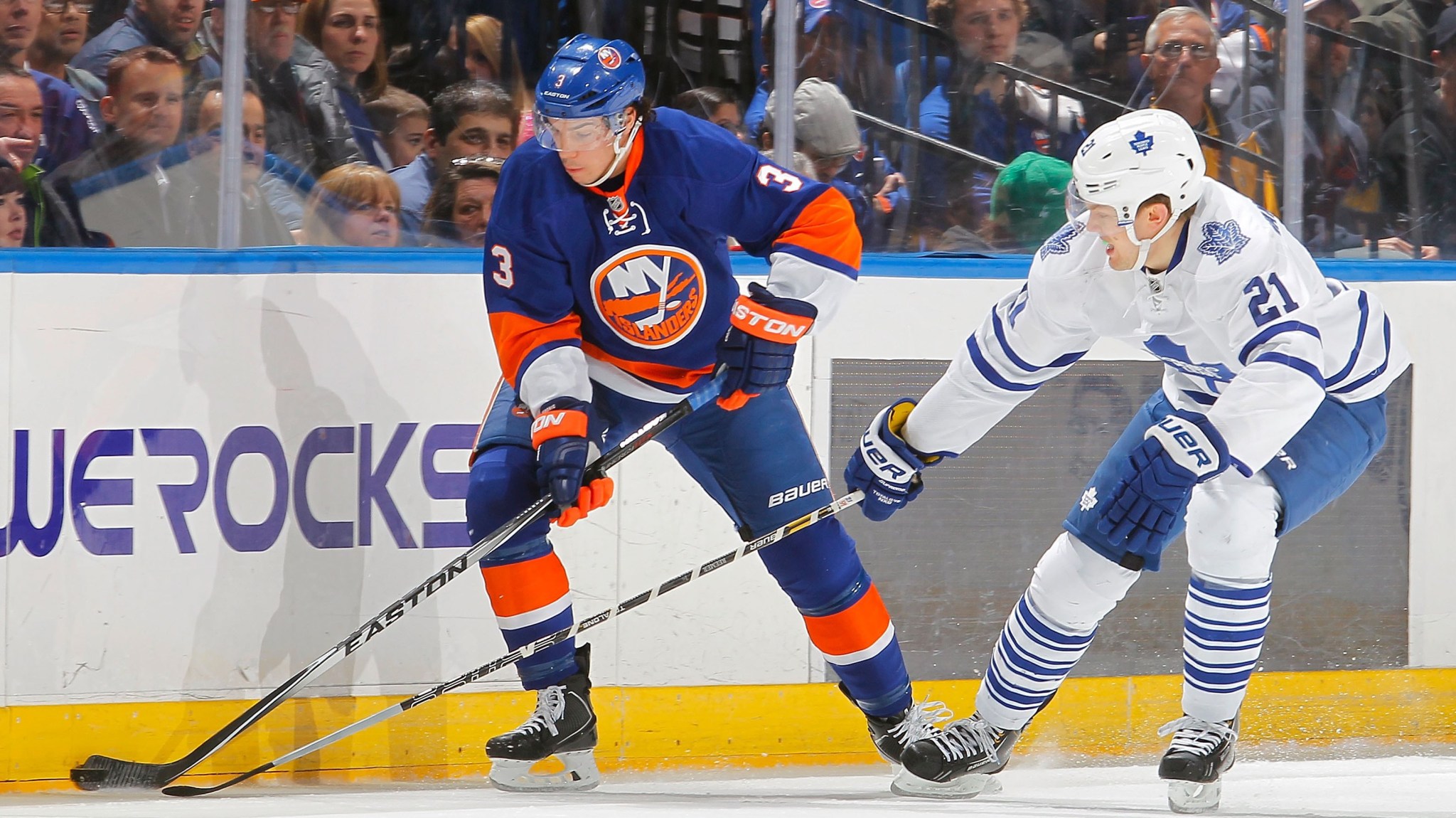 There aren’t many constants that an NHL fan can rely on these days. We know that the season starts in October (unless there’s a lockout), and it ends when the Stanley Cup is handed out in June (unless there’s an even longer lockout). The puck is black (unless it starts glowing), the ice is white (unless they sold too many ads), and there will be banners hanging from the roof (unless we’ve decided to play this one outside).

And then there was the closest thing a modern-day hockey fan has had to a sure thing: No matter what else happened, no matter how much everything else might change, the New York Islanders and the Toronto Maple Leafs would find a way to embarrass themselves.

Both franchises have become punch lines over the years, although the setups are slightly different. The Islanders were the rudderless ship, wandering around a decrepit and half-empty arena in embarrassing fishstick uniforms, clutching laughable long-term contracts signed off on by questionable owners. Meanwhile, the Leafs were the league’s arrogant rich kid, strutting down their preplanned parade route while telling anyone who would listen how wonderful they were, seemingly unaware that the rest of the hockey world was laughing at them.

And both teams, needless to say, were terrible. In the decade since the 2004 lockout, the two teams combined have yet to win a playoff series. The highest point total either produced in that span was a measly 92 (by the Islanders, seven years ago). And the only time they’re seriously talked about as contenders is when the league holds its annual draft lottery.

All of which is why it was so stunning to watch the headlines roll by on Tuesday afternoon. The news was all about the Islanders and the Leafs, and for once the news was actually good.

Let’s start with the Islanders, whose story was the bigger one even if it may not receive the deluge of attention that every Maple Leafs move inevitably gets. News broke on Tuesday that majority owner Charles Wang had agreed to sell a stake in the team to former Capitals co-owner Jonathan Ledecky and an investor. Wang will remain as majority owner until 2016, at which point Ledecky will assume the role. (The deal still requires approval from the league’s board of governors.)

That essentially spells the end of a Wang era that dates back to 2000, when the tech tycoon bought a minority share in the team (he became the majority owner in 2004). You could hardly call his time in Uniondale a success, at least in terms of results on the ice, and he was often ridiculed for some of his more outlandish ideas. He was the owner who gave Rick DiPietro a 15-year deal that ranks among the worst in NHL history, and he was roundly mocked for promoting backup goalie Garth Snow to the position of GM in 2006. (It’s worth pointing out that Snow has done just fine in the job, and still holds it today.) Perhaps the most memorable Wang story, which may or may not actually be true, had him instructing then-GM Mike Milbury to look into signing sumo wrestlers as goalies.

But while many of Wang’s brainstorms went bust, he succeeded in keeping the troubled team in town, or at least relatively close. The Islanders have long been one of the league’s ongoing financial messes, owing largely to being stuck playing in the old and tiny Nassau Coliseum. His attempts to get a new arena on Long Island ultimately failed, but a recent deal to move the team to Brooklyn was seen as a reasonable compromise.

The Islanders’ ownership uncertainty had been a running drama for years before Wang arrived, and had continued to be an off-and-on story even after he established control. (Just a few weeks ago, Wang was sued after allegedly backing out on a handshake agreement with another buyer.) Now, mercifully, that all seems to be over with, at least for a little while.

The timing of the transfer of power will coincide nicely with the team’s move to the Barclays Center at the start of the 2015-16 season. With captain John Tavares already among the league’s best players and just entering his prime, plenty more young talent on the way, and the goaltending problems that torpedoed recent seasons largely solved, the organization was already headed in the right direction. A stable ownership situation should be yet another piece of a puzzle that means the Islanders have a chance to actually be good again. And, maybe even more importantly, they have a chance to be relevant.

Relevance has never been an issue for the Maple Leafs, who get perpetual front page treatment no matter what they do. This week was no different, as the team generated a flurry of coverage just by making a few front office hires. Nothing critical, mind you, like a coach or GM — just a new cap guy and a few analytics types.

That makes it tempting to write off the news as just more meaningless noise from the Toronto hype machine. But the moves fit a larger pattern that has emerged in team president Brendan Shanahan’s first few months running the team, and it’s one that fans aren’t used to: The Maple Leafs are riding a streak of smart decisions.

That string began with the hiring of Kyle Dubas as assistant manager. Dubas was a well-regarded GM in the OHL, but at just 28 years old he lacked the kind of decades-long résumé that it typically takes to get in the door at MLSE. That was followed by a series of small but sensible roster moves. And then came Tuesday’s hiring spree, which included plucking Brandon Pridham from the NHL head office to take over as the team’s cap guru, as well as the formation of a new analytics team.

Pridham’s position is higher up the org chart, but the analytics group is intriguing. It’s highlighted by Darryl Metcalf, the mind behind the ExtraSkater.com website. The fate of the Extra Skater site had been the online hockey world’s biggest mystery for the better part of a week, after the site and Metcalf himself went silent. That led to plenty of speculation over which smart NHL team had snapped him up. It’s fair to say that the Maple Leafs were not considered a prime suspect.

Metcalf will be joined by a pair of bloggers, Rob Pettapiece and Cam Charron, the latter of whom will be familiar to Grantland readers. Both have done extensive work in the analytics space, much of it critical of the Maple Leafs themselves. They’re interesting additions, in the mold of the recent Oilers’ hiring of Tyler Dellow.

Shanahan’s offseason record isn’t spotless — he took plenty of criticism for retaining head coach Randy Carlyle, and rightly so. There’s no guarantee any of this will work, or that key decision makers like Carlyle and GM Dave Nonis will even want to listen to all these new voices. And the hires are hardly groundbreaking, because everyone has a cap guru these days and other teams have already been building up analytics departments for years.

But Maple Leaf fans have to be excited by the mere fact that, for once, the team seems to be keeping up with the pack instead of determinedly striding backward. For years, the Maple Leafs have conducted themselves like a team that had all the answers, even as the standings screamed otherwise. Now, Shanahan seems to be acknowledging that a new way of thinking might be in order. That conclusion may seem obvious, but until very recently, MLSE didn’t do obvious.

It’s quite possible that the whole experiment fails and the Leafs run tearfully back into the arms of old-school thinking, but right now it’s hard not to wonder about the possibilities, especially given how many of the remaining holes in the sport’s analytics wisdom are due to a lack of resources. Nonis once famously bragged that the team had long had a substantial analytics budget but couldn’t figure out how to spend it. If you’re one of the other 29 teams, the idea of the league’s richest team deciding to really invest in the field has to be a little bit terrifying.

So the Maple Leafs have a new approach, and the Islanders have a new owner and (soon) a new home. None of those facts will have teams like the Kings and Blackhawks shaking in their skates, but a start is a start. In a league with few constants, that alone is enough to get people talking. Because an NHL that can no longer count on having the Islanders and Leafs to kick around would be a strange place indeed.

The 2014 Miami Marlins: The Dog That Didn't Bark