Is Michigan Too Smart for College Football? 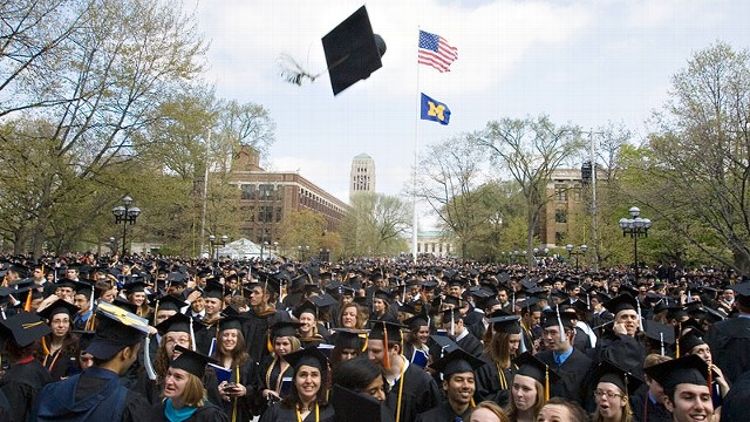 An alien that comes down from Mars or New Haven might think America’s public universities are full of football-loving morons. This is deeply unfair. Our rivals are far greater morons than we are, and, during the college football season, it’s up to us to point it out. I like to call this practice “academic smack talk.”

I saw a good deal of academic smack talk after Alabama beat Michigan, 41-14, on Saturday night. A Wolverines fan named “MGlobules” took to the excellent MGoBlog and complained of an uneven playing field. “Brent Musberger is never going to give a shit that we graduate more kids or have a school attached to our football factory,” MGlobules wrote. He/she added, “Should we just go all Ivy League and not give a crap about the SEC?” I think that part was a joke.

Over at Rivals.com’s The Wolverine (subscription required), a poster called “fordm63” recounted a meeting at the game with an Alabama yokel who didn’t know his university had a college of engineering.

A Wolverines poster named SalemBlue was on the same page: “[M]ore important than the wins, [coach Brady Hoke] does things the right way. Complete integrity and clearly with the focus on life lessons, academics, and football — not just football as at many schools.” Get the gist? Bama’s T.J. Yeldon may have imprinted his cleats on the chests of Michigan’s defensive ends, but at least U of M’s diplomas are worth something.

Academic smack talk has a rich history. When he was coaching at Stanford, former Michigan quarterback Jim Harbaugh zinged his alma mater. “Michigan is a good school, and I got a good education there,” Harbaugh said, “but the athletic department has ways to get borderline guys in, and, when they’re in, they steer them to courses in sports communications.” Notice the power move: Stanford was asserting its place in the hierarchy above Michigan, just as Michigan would later do with Alabama. This offseason, someone at Ohio State posted a chart at the athletic center comparing the majors of Buckeyes players to those of Michigan’s. The chart said that 24 Michigan players listed “general studies” as their major. The Buckeyes’ top two majors were communication and “family resource management,” but never mind. OSU was trying to obscure the U.S. News & World Report college rankings, which in the world of academic smack talk serve as the true Top 25.

Why do this? The first reason is tribal. While a Michigan fan’s normal smack talk begins with last year’s win over Ohio State, it expands to include Michigan’s reputation as a top-drawer public school, like Berkeley, UCLA, North Carolina, and Texas (probably the spot to admit that I have done this, too). Nate Silver, an East Lansing native who runs the New York Times political blog FiveThirtyEight, taunted Michigan fans on Twitter during Saturday’s game. Jonathan Chait, a Michigan alum and New York magazine writer, responded, “Once upon a time Michigan State was good at academics … oh, wait, that’s not true.”

Second, academic smack talk is an exercise in victimhood. If only we had the atrocious standards of our rivals, we could win some football games … This is what former Notre Dame tailback Allen Pinkett was getting at last week when he complained the Irish hadn’t recruited enough “criminals.”

This is a pretty shaky argument. The NCAA has minimum grades and test scores its football players must achieve in high school. Most football powers take the minimum standard as their own. Where schools like Michigan say they exercise discretion is by turning down marginal students who might have trouble staying eligible. But a 2008 Ann Arbor News investigation found that over a three-year period, one Michigan psychology professor taught 251 independent-study courses to athletes. The players earned a GPA in his courses that was a full point higher than their other courses. So even if Michigan admits better students on average, it’s not above using SEC-style (or Big 12–style … or MAC-style) tricks to keep them eligible.

Finally, academic smack talk helps us fans rationalize the very existence of college football. Nearly everyone thinks the NCAA’s “student-athlete” designation is bogus. Some of us might feel it’s a title under which a player is forced to work an unpaid job; some might feel that the “student-athlete” designation is basically OK, but the NCAA does a poor job of enforcing it.

By arguing that our classes are tough, that our single engineering major is the face of the squad, we feel cleaner about a dirty enterprise. We may lose to Bama, we say, but in 10 years their guys will be asking ours for jobs. This is our solace. Hail to the brainiacs.

We Found It on Craigslist: Life-Size Shaq Art