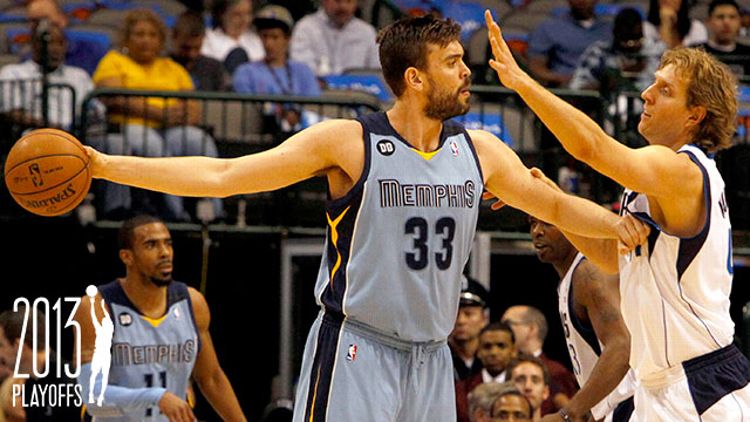 In preparation for the NBA playoffs, this is second entry breaking down one play or action central to the success of each playoff-bound team. (Read the first post, on the Knicks, Celtics, Heat, and Bucks, here.) Check back tomorrow for the remaining eight breakdowns.

It’s no secret that this Denver team loves to play fast. What may come as a shock, however, is that it’s the Nuggets’ 37-year-old backup point guard, not their speed merchant Ty Lawson, who allows them to truly achieve a breakneck pace.

This is because Miller is perhaps the best point guard in the league at the hit-ahead pass, a pass most players learn before they even hit puberty. But knowing about it and executing it are two different things. The veteran guard possesses an unbelievable ability to receive an outlet from a big man and then, sometimes even without a dribble, fling a pass on the money to a streaking teammate nearly 50 feet upcourt.


Lawson may still be the key figure for Denver come crunch time, but it will be Miller who helps the team pick up those easy baskets in transition that are so vital to the Nuggets’ success.

This one comes with a bit of a caveat, as the high pick-and-roll or Blake Griffin post-up are more frequent sights for L.A. But the team is at its best offensively when two things are happening — they are pushing the ball up the floor quickly and Paul is doing so looking to score. This play includes both and could play a huge factor in the Clippers’ postseason success.

When L.A. walks it up or Paul becomes too deferential, its offense, which lacks cohesiveness and disciplined spacing at times in the half-court, can experience some ugly possessions. If Paul and his teammates are focused on creating good opportunities with a quick ball screen in the early part of the shot clock, neither of those things becomes an issue.

This team will become infinitely more difficult to defend if Paul can make a concerted effort to attack off these drags while the defense is still getting set. If the Clippers are to make a deep playoff run, their fans better hope they are seeing this action quite a bit.

Though Rudy Gay now resides north of the border, the Memphis offense hasn’t changed all that much in his absence. The sets and actions remain virtually the same, but the holdovers in River City have simply been asked to carry a bit more of the load. And even though Mike Conley has responded by playing the best basketball of his career over the past few months, the team remains heavily reliant on the production it receives from its two frontcourt stars — Zach Randolph and Gasol.

Head coach Lionel Hollins incorporates both of them with one of the oldest plays in the game, the high-low. Gasol’s accurate outside jumper and nifty passing skills are perfect in the high post, and the bruising Randolph’s exploits make him an ideal fit closer to the basket. The action itself is rather straightforward, but Memphis does a nice job of mixing up the ways they get into it.

The most common is a straight roll-replace out of a pick-and-roll, in which Conley comes off a screen from the non-Gasol big (Ed Davis in the following video) and hits Gasol as he lifts behind the screener rolling to the basket.

Other times, Gasol will be the screener in a pick-and-roll, but will stay high as the ball handler drives toward the baseline. As Gasol receives a throwback pass from the guard or wing coming off the screen, Randolph will bully his way into the paint looking for a quick post-up.

The two big men also screen for each other. With the ball on the wing, Gasol will set a cross screen in the paint for Randolph (or Davis) and then quickly cut toward the strongside elbow for a shot or look at a high-low pass.

If teams are going to win grind-it-out affairs versus this Memphis team, they will have to figure out a way to stop the Grizzlies from taking advantage of their skill inside.

In Klay Thompson and Steph Curry, the Warriors employ two of the best players in the league at shooting on the move. Mark Jackson uses floppy action — a common NBA move involving two wings crossing underneath the basket before coming off screens — to put them in great positions to attack a defense.

With both Thompson and Curry being threats to curl quickly around a screen for a shot, it’s impossible for a defense to key on one of them while ignoring the other. As the season has worn on, those two have learned to read each other well enough that instead of always rushing by each other, both hunting for a shot, one will stop and actively look to screen a teammate’s man.

Jackson has also developed one of the most unique entries into floppy action in the NBA. At times, Curry and Thompson will start wide, curl around an initial screen, and then crisscross underneath before coming off looking to receive a pass from the ball handler situated at the top of the key.

The additional cut before going into an action already difficult to defend acts as another hurdle for Warriors opponents to navigate as they try to keep up with the two Golden State marksmen.