In Praise of the Tireless Sports Mom 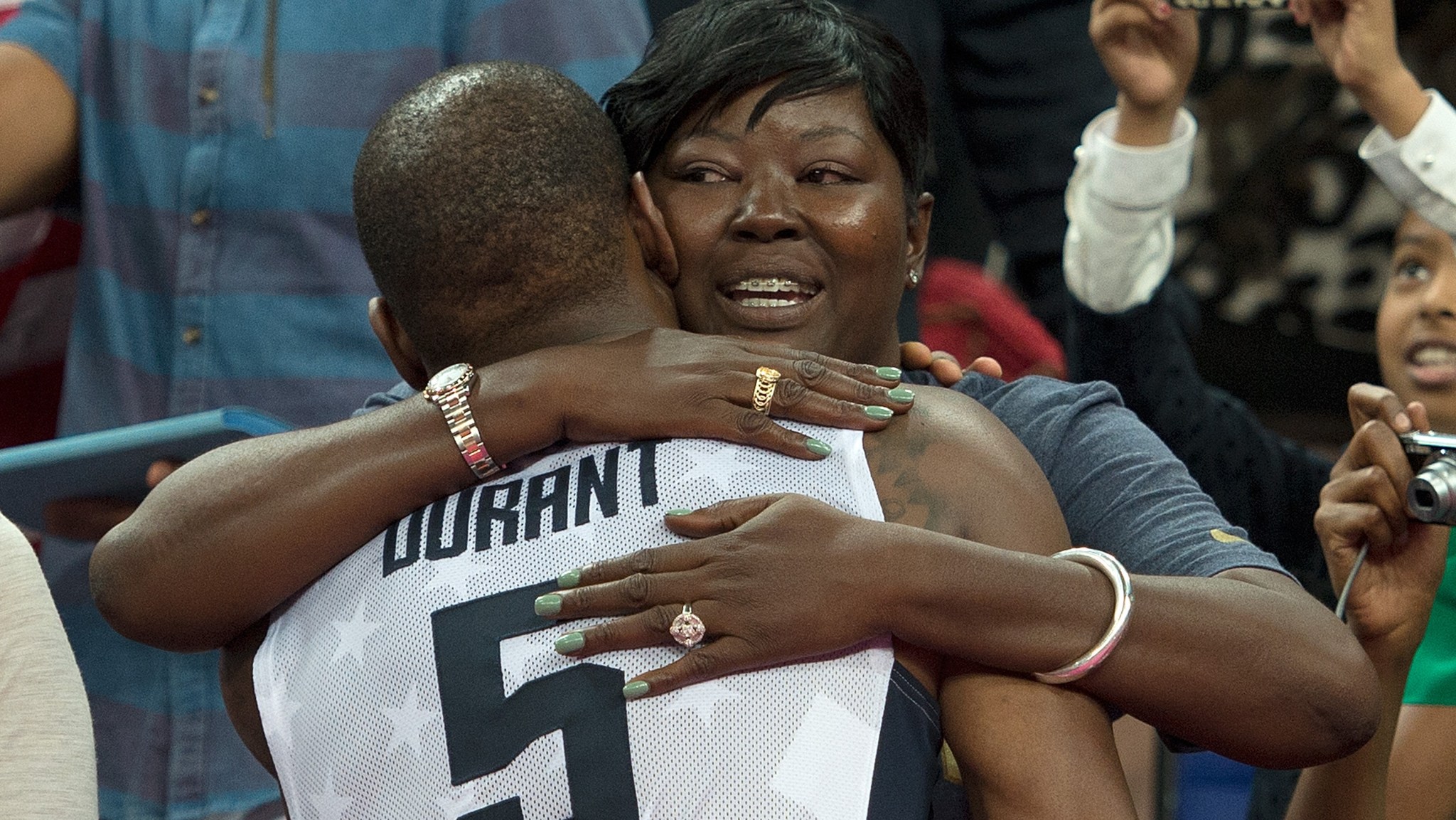 They slice the oranges into wedges and tolerate the muddy cleats. They idle for hours in the bleachers so they are sure to be there for a 30-second race. They lug around heavy coolers and complicated lawn chairs and an extra change of clothes.

They’re up at 5 a.m. for carpools or up until midnight telling over-sugared little monsters to stop racing down the motel halls. They hold grudges and give pointers and smooth on Band-Aids and dry tears. They cry, themselves, too, in frustration (secretly) and with pride (publicly).

They are sports moms, and they all deserve a ribbon and a trophy and probably a 90-minute back massage. It’s Mother’s Day on Sunday — call your moms! Or at least call their florists and/or local liquor stores! In honor of Sunday, let’s salute some of the women responsible for raising the greatest athletes in the world.

Note that this is not a ranking; just as moms swear up and down that they don’t have favorites, we have equal love in our hearts for everyone. Consider this a loud celebration of all those loudly celebrating crazy ladies in the stands.

Living meat-slab Rob Gronkowski — a “German shepherd puppy,” according to his mother — represents a scant 20 percent of Diane Gronkowski’s allotment of sons. FIVE SONS! Keeping these boys fed was like running an industrial corporate food bank. “They blew through two six-pound bags of Sahlen’s hot dogs for a snack,” Jackie MacMullen wrote, “then an hour later were clamoring for dinner.” (Young Robbie was not so much appreciative of her efforts; it was only later in life that “it took him having to do it without me to realize I wasn’t so bad.”) This makes the Khaleesi’s job seem simple.

Best Mom Who Leveraged a Foodstuff Into an Empire

The first airing of the Campbell’s Chunky Soup commercials that featured NFL “mama’s boys” employed an actress to play Donovan McNabb’s mom. Wilma McNabb wasn’t having it. “I said, ‘I can do that,’” she told the New York Times. “‘I can do what she’s doing.’” And so she did. She’s been a legend in the industry ever since. “I better not be close to another fast food restaurant,” she told The Early Show. “They say, ‘That’s not Chunky Soup.’”

Best Description of a Sports Mom in a Slate Piece

“Worst of all, his dragon-lady mother once stuck her hand down his shorts after a practice to check if they were wet. At the Junior Davis Cup! In front of his friends!” Poor dear Michael Chang.

Best Tribute to a Mother From Her Boy

Kevin Durant’s MVP acceptance speech last season was one of the all-time greats, the equal and opposite reaction to Michael Jordan’s Hall of Fame stream of pettiness and paranoia a few years back. At the end of a long, sincere acknowledgment of just about everyone who has made an impact in his life, Durant got to his mother, Wanda Pratt. This is just a portion of what he said. I dare you not to cry:

One of the best memories I had was when we moved into our first apartment, no bed, no furniture, and we just sat in the living room and just hugged each other. We thought we made it. …

We wasn’t supposed to be here. You made us believe. You kept us off the street. You put clothes on our backs, food on the table. When you didn’t eat, you made sure we ate. You went to sleep hungry. You sacrificed for us. You the real MVP.

Best Tribute to a Boy From His Mother

Minnesota Twins first baseman Chris Colabello hits a home run as his mother is being interviewed in the stands. :-D

But Cincinnati Reds right-hander Michael Lorenzen gives up a home run (in his first MLB game) as his mother is being interviewed in the stands. :-(

(Unfortunately, it’s hard to make out whether this particular Boston woman was a hockey mom or a pit bull when she strode onto the ice, purse still in hand, to break up a hockey fight.)

Best Athletes Who Are Moms

Sheryl Swoopes leaned in and then some. Kim Clijsters’s adorable moppet of an 18-month-old daughter came onto the court in 2009 to celebrate her mama’s U.S. Open singles title. (“We tried to plan her naptime a little bit later so she could be here today,” Clijsters told the fans.) Dara Torres swam at the U.S. national championships just over a year after giving birth, and won three silvers at the Olympics the following year. Try not to think about any of this as you struggle to reheat mac-and-cheese.

Best Incentive Program As Implemented by a Mom

Steph Curry’s mother, Sonya, was a former collegiate volleyball player (even at 5-foot-3!) and, later in her life, a riled-up mama in the college basketball stands who was beloved by television producers for her animated gestures and reactions to her sons Stephen and Seth.

These days, she’s a savvy motivator who has an ongoing bet with Golden State Warriors golden boy Steph: For every turnover over three he makes in a game, he owes her $100. (If he finishes a game with fewer than three, she owes him.) Bay Area columnist Ann Killion writes:

At the end of the season, Curry doesn’t write his mother a check; she just lets him know — usually through his wife, Ayesha — what fashion items she has had her eye on. …

He thinks about it in game, like Friday when he had six turnovers against Oklahoma City, owing his mother about one Manolo Blahnik. Not one pair, one shoe.

“Oh yeah, in games, I’ve thought about it,” he said. “When I get to two I think, ‘Dang, I can’t have any more.’ If I get four it’s frustrating even more than just playing the game.”

Conley moved HELL….Dray was trying to put his hand on the FLOOR ..so SAVE the BS!!!

Can all the ppl that aren't Warrior Fans or ppl I follow/follow me stay off my page an using my name…talk to your own PEOPLE..thank you

When Landon Collins chose to play football at Alabama and not LSU, his mother did not bother to disguise her revulsion on national TV. When he was drafted by the New York Giants last week, it once again was not her first pick: She “joked about stashing a Dolphins hat to bring to the draft, but said Collins had actually already warned her not to make draft weekend a replay of 2012.” Moms can be so embarrassing.

You know when you play car-racing video games or go bowling and you can’t help but lean your body to the side even though it obviously doesn’t help? That was U.S. Olympic gymnast Aly Raisman’s mother (and father) during her daughter’s routine.

Donna Kane, mother of NHL sensation Patrick, who accompanied her child to Switzerland during the NHL lockout. “Between them, the Kanes brought only his hockey bag, some sticks and three suitcases,” the Wall Street Journal described. “One’s for him, one’s for her and the third is essentially America in a Bag. Among its contents are cereal bars, Kraft Macaroni & Cheese, a raft of bestselling novels and, of course, a book about Tim Tebow.”

Remember when we said we couldn’t possibly rank sports moms? Well, we lied. The no. 1 matriarch of our era married a quarterback, raised two more (as well as a receiver, because every game of New Orleans Garden District front-yard football needs at least one of each), and so instilled a sense of security in her sons that they — well, one of them — contentedly accompanied her to antique shops as tweens.

“One minute, she’d say, ‘What you did was not appropriate,’” her son Cooper told Garden & Gun magazine in 2012. “And in the next breath it would be ‘Please put some ice in my margarita.’”

In every childhood video, in every latter-day touchdown pass, her presence can be felt. All hail Olivia Manning, with her animal prints and her bright lipstick and her thoughtful parenting — the formula to be the ultimate mother of champions.

Heat Check: Taking the Temperature of the NBA Playoffs

NBA Shootaround: The One Where LeBron James Saves the Day