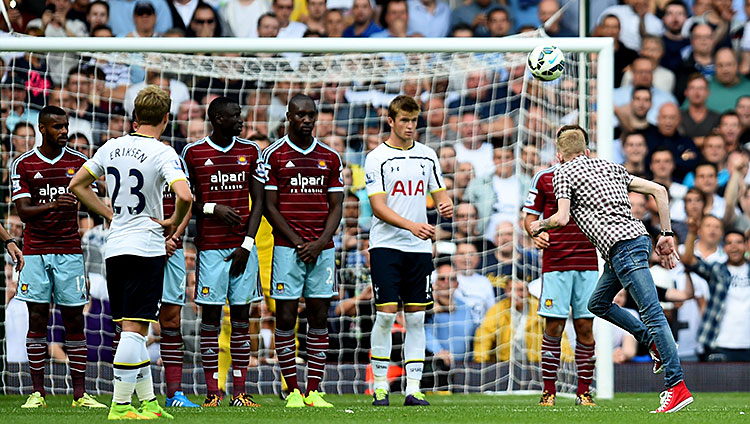 When you see someone running on the field during a sporting event, you probably think, That will never be me. Announcers shake their heads so vigorously it produces an audible rustling of their collars. The word “idiot” gets tossed around a lot — “idiot on the field” is often the phrase of choice. In fact, the Great American Idiot, Homer Simpson, ran onto the field once: The headline read “Idiot Ruins Game.”

It seems like there have been a lot of these idiots recently. There was Jordan Dunn, the man who took the free kick in West Ham’s opening match against Tottenham.

After Manchester City’s opener, a man ran onto the field and asked for Sergio Agüero’s shirt. That same weekend, a streaker ran onto the field during a Braves game. A Chicago man stormed a Bears scrimmage; at his hearing, the judge asked him, “Why you gotta be so silly?”

Pitch invaders are spontaneous intrusions into an otherwise orderly sporting universe. They run into and are subsequently carried out of our lives. For the brief period they’re running around the field, one word often comes to mind (other than “idiot”): Why? Why the hell would anybody do this?

Dunn, the man who took the free kick, told Kent Online it was a “spur of the moment” decision: “I thought no one else was shooting so I might as well.” Some might argue that the eight beers he had before the match were a considerable factor in his thought process, but many pitch invaders are stone-cold sober when they take the plunge.

During the 2013 All-Star Game at Citi Field, Dylan McCue-Masone was sitting in the stands when he got bored, as sober people at baseball games tend to do. To create some intrigue, he tweeted that he would run onto the field if the tweet got 1,000 retweets, the first number that popped into his mind. At first, not much happened. Then the retweets came pouring in. An hour later, he got the thousandth retweet and he “mustered up the balls,” as he put it over email, to stay true to his word. “Once my feet hit the ground, my first thought was ‘What the fuck am I doing?’” You can almost see this happen in the video, as he suddenly stops running, at which point a security guard takes his legs out from under him.

At the Yankees’ 2002 Opening Day, Kristielee Anikewich made a similarly impulsive decision, but for a completely different reason. She was sitting on the third-base side with a few friends when a thought popped into her head. “I’ve always had a thing for [Derek] Jeter and I wanted to give him my number,” Anikewich told me over the phone. So she went to the bathroom and wrote her number onto the back of a receipt with lip liner. In the bottom of the fifth inning, she walked down to field level, hopped the barrier, and ran to Jeter, where she apologized for bothering him and provided him with the lip-lined receipt. He laughed, put the number in his back pocket, and kindly advised her to start running. (She won’t say if he ever called.)

Some people seem to use running onto the field  as an outlet for a thirtysomething crisis. Take the May 2013 case of a man named Joe. Joe hadn’t even been planning on going to a baseball game when his friend called and asked him if he wanted to catch the Blue Jays that afternoon. As he sat in the stands and scrolled through baby pictures and wedding announcements on Facebook, “It became blatantly clear to me that if I were to ever do anything as crazy as interrupt a baseball game, this was probably one of my last opportunities before life got truly serious.” On his website, this is as much of an explanation as he offers for why he then got up and, without saying a word to his friends, ran onto the field.

The stories go on like this. People who didn’t plan on running onto the field suddenly decide to do so. In an effort to try to understand this behavior, Professor Brett Laursen of Florida Atlantic University told me about something developmental psychologists call deviant talk. “Deviant talk is when you get together after you’ve done something and you say, ‘Wow. You know, it was so cool.’” In other words, people sometimes do stupid things in order to tell a good story. In the olden times when every person didn’t have a camera in his or her pocket, one could often get away with deviant talk armed only with a good story. Now people demand evidence, and what better way to capture the moment than in a stadium full of people?

This, as much as anything else, seems like the best explanation for why people run onto the field. As much as Joe claims it was down to #YOLO, with his website presented more as public awareness than braggadocio, a fundamental part of our desire for unique life experiences is so we can share them with others.

Dunn told Kent Online that “my mates think I’m a legend” and “my phone hasn’t stopped going off.” McCue-Masone told me he wouldn’t recommend it to others (partly because he was falsely told he would spend 15 days at Rikers), but qualified that by saying, “It was something I’ll never forget and get to tell my grandkids.”

Independent of the consequences, there’s definitely something appealing about running around to the cheers of tens of thousands of people, weaving between unathletic security employees, where the only thing that matters is not getting caught. It’s a leap into the surreal where civilization blurs in the background, a way to escape whatever one’s life entails for the briefest of moments.

But the moment can only last for so long. Every pitch invasion ends the same way: in handcuffs, charged with criminal trespassing or a similar code violation. Maybe they get off with a fine or some community service. Most aren’t sentenced to jail time, but spend some time in jail. All are labeled as idiots.

Pitch invaders aren’t idiots, though, at least not as much as we imagine. Deviant talk is not just for deviants. Everyone does it. Although they vary in severity, all have that go-to story we tell at parties about That Stupid Thing we did. (Mine is about chugging 20 packets of maple syrup and throwing up in a parking lot.) In one way or another, we’re all deviants engaging in stupid activities to demonstrate our spontaneity and intrigue. Everyone wants to be an interesting person, which requires we do interesting things. We rarely know what that strange, stupid thing will be until the moment comes. You might think you’d never run onto the field, but so did most of the people who ended up getting carried off the field in the arms of security guards. Maybe the next time you’re at a sporting event, the thought will pop into your head and maybe you won’t be able to get it out.

Aaron Gordon (@A_W_Gordon) is a staff writer at Vice Sports.