I Suck at Football 2.11: I Am Sitting in a Room b/w Two Dicks on an Island 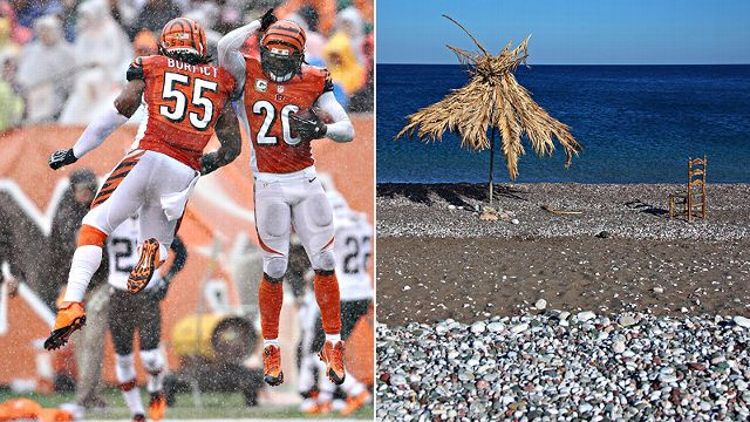 I watched almost no football this week, except for the last three quarters of the Seahawks/Vikings game, because a tense match between the Lords Disick and Richard Feynman’s team potentially hinged for me on Marshawn Lynch’s performance in that game. The Seahawks are a really fun team to watch; they’re good at football and they dress like ’90s superheroes who’ve temporarily lost their jackets. I didn’t see a minute of the Bengals/Browns game, but as a fantasy owner who acquired the Bengals D-line as an inside joke, I continue to find it hilarious that they’re consistently my top-scoring “player” from week to week. I also have very little to report about my actual life, except that earlier this morning I elbowed an external hard drive off my desk onto a hardwood floor and now it’s making All the Bad Noises. About an hour before that happened, I asked people on Twitter to ask me football questions “&/or the tough questions I’m afraid to ask myself.” Below, I’ve answered all the questions I received in response to that tweet, thereby allowing me to save “Dane Sanzenbacher Fan Fiction Week” until after the bye week. You’re welcome.

@PAPPADEMAS has rooting for the bengals and watching football improved or hindered your Sundays?

I’ve mostly been not drinking while watching these games this year — a move I picked up from Heinrich Hertz — because I like being able to dip out of my life for three hours to watch football but I also like being able to dip back in afterward to hang out with my daughter and teach her that Crom is her god and he lives in the earth. Also, I’m actually trying to focus on what’s happening in the games. I know that’s un-gonzo of me (and that based on the last 10 posts in this series, there’s no evidence that it’s working) but it’s true. So, now that watching football no longer equals me then trying to show up for the rest of Sunday afternoon while partially in the bag, it’s less of a hindrance and more of a life-improver. It’s good to be out there among people. I think it’s important to cultivate that in a city like Los Angeles versus a city like New York where your bubble of personal space is almost always overlapping someone else’s. My wife pointed out to me this weekend that our natural tendency — hers and mine as a couple, I mean — is toward a state she called “Two Dicks on an Island,” meaning that we tend to go off and hide together rather than making an effort to share our lives with other people. I think we were alone on top of a very tall hill when we had this conversation. We’re always running off to metaphorical Havana like Ellen and Ben. It’s been like that from the beginning. And going out and being by myself in public staring at a TV in a dark bar isn’t necessarily helping me correct that tendency, but something about sitting with strangers feels like not-being-a–Cornelius Gurlitt practice, somehow?

Having said that, the only reason we were on top of the hill having that conversation is that I’d decided to blow off watching the 10 a.m. games on Sunday in order to go for a hike in a canyon with her. It was one of those ridiculously nice days that few Novembers other than L.A.’s have to offer, and I didn’t want to drop her off at home and then drop myself off at a dark bar — or not yet, anyway. So technically the extent to which I enjoyed my Sunday morning was directly a result of my having chosen not to watch football. So there’s that.

@PAPPADEMAS has football gotten so complex ruleswise that’s essentially impossible to play or officiate as designed?

This question spawned a back-and-forth in my @-messages between Beau and Jay Ratkowski about the relative complexity of football versus baseball and whether it would even be possible to explain the rules of football in less than an hour. I can’t speak to the baseball comparison at all, but in terms of football, the issue isn’t really complexity, right? Because most football fans seem to be OK with the game’s complexity, and some of them seem to actually love it. One of the first big breakthroughs I had in my relationship with this game was the moment I realized it spoke to the same hunger for rules-based fictional universes such as Dungeons & Dragons — or maybe more accurately, the desire to improvise or watch people improvise within a framework that rigid. And part of the reason all the pseudonyms in ISAF are physicist names is that in the beginning the rules of football seemed as incomprehensible to me as the behavior of theoretical particles, so anybody I knew who knew anything about it seemed as smart as Stephen Hawking to me.

You’d have to ask someone who’s been watching this sport for more than 16 months if it’s become a more rule-based game and therefore a game whose outcome is more shaped by penalties. But this question’s really about concussions, right? We’re going to be having versions of this conversation for the next 10 years, as we try to figure out if it’s possible to preserve football’s violence while removing the potential for injury. The problem is that football isn’t a fictional universe. G.I. Joe shot down thousands of Cobra’s planes without a single fatality because the rules of the Joeverse are that pilots can always parachute to safety, that no spin is too flat and no explosion too catastrophic. Those are the Joeverse’s laws of physics. In a sense, by trying to legislate brain trauma away I think we may be trying to amend our own universe’s laws of physics, like maybe we’re trying to remove egg-breaking from the process of running a Denny’s. I just invoked both D&D and G.I. Joe in a single answer; I’ll show myself to the inside of my locker, thank you.

.@PAPPADEMAS in your opinion, will Andy Dalton ever consistently play to his talent level or will he always be up and down?

I think this is what Andy Dalton “playing consistently to his talent level” looks like: boneheaded interceptions, hunting helplessly for A.J. Green like a mislaid binky, general yips. I think he has an erratic and inconsistent gift. I don’t buy the narrative that Dalton has some hidden reserve of eliteness-juice that he just needs to figure out how to tap into, like he’s feeling around next to the steering wheel looking for the button that fires the nitrous tanks or turns him into Rodimus Prime or whatever — I think this is it. You know that Louis C.K. quote about what happens when you do comedy (or anything) for a long time? He says that your best gets better, but more importantly your worst gets better. I don’t think Dalton’s worst is improving. But he’ll keep having the occasional anomalous great-ish game here and there and the Andy Dalton–is-on-a-hero’s-journey story line will persist. Actual headline on the Bengals fan site Stripe Hype the other day: “With Improvement, Andy Dalton Will Do Great Things for Bengals.” Logically sound.

Wait — didn’t Bernard injure his ribs this week, not his foot? Is this a trick question? Anyway: Thank you for bringing up 4,000 people dying in a typhoon. That’s the kind of slam-dunk comedic premise I knew this call for questions would generate. I’m going to go ahead and say the typhoon is the worst of those three things. But in terms of my personal emotional response, I’m going with the western black rhino extinction, a sad story that took on a level of existential tragedy for me when I read a Scientific American article and learned that the species probably disappeared about a decade ago, and that the sudden groundswell of “Aww, rhinos” sentiment that’s happening right now is mostly due to CNN updating an old article and reposting it with a new dateline. In other words, not only did we not care when our caring might have mattered, we didn’t even care when it happened. Somehow that aspect of this extinction story compounds the sense of irretrievability, and renders the act of going on Twitter and typing something like “I hope the douchebag who killed the last Western Black Rhino gets #SuperAids” that much more pointless. On the plus side, maybe with rhinos off the table people will be able to devote more attention to preventing the sale of motherfucking lion bones, a trade I can only imagine evolved because guys in the rhino-horn boner-medicine industry needed a class of person to look down on.

Right up until this question came in I’d somehow missed out on the whole phenomenon of Cousin Terio, human Haters Gonna Hate GIF turned Internet celebrity turned meme-churn casualty and child-exploitation cautionary tale. It’s weird to look something like that up on YouTube after the fact: I watched a compilation of Terio’s original Vine videos and then I watched a how-to-do-the-Terio demonstration video and then I watched a video for a very expository novelty rap song about how everybody started doing the Terio and then I watched Terio dancing to Migos’s “Bando” in DJ Drama’s studio and at some point I started to feel bad about myself and then I was bored. I went through all the stages of viral-video exposure, from enchantment to cynicism to pray-for-Mojo sadness to compassion fatigue to aversion, in approximately 11 minutes. I’m over Terio now. No. 1 for me, mostly because it allows for so many interpretive flourishes depending on how many sous-chef moves you add in before you get to the “spooning” motion, is the Cooking Dance, circa 2010, a.k.a. The Year Based Broke.

@PAPPADEMAS If the column ended today, would you ever watch football again?

Yes. I think if you’d asked me this at the end of last season I might have said no, but at least for me, the combination of RedZone and fantasy football (uh, “teaming”? “Gaming”? Is there a verb for this?) is kind of an unbeatable delivery system for this sport, at least for me. It took me a while to learn how to smoke, but eventually I got good enough at it that it was hard to stop.

@PAPPADEMAS If the sport was called Ballfoot would it be as popular?

Seriously, you guys, this hard drive. It sounds like somebody’s sharpening knives inside it. That can’t be good.

@PAPPADEMAS has this whole watching football thing made you feel more (or less) isolated / existentially alone?

It has given me more time to think about my sense of isolation and existential aloneness, and about the extent to which those feelings are an illusion, a story line I’m imposing on my life. And the extent to which they result from my belief I’m not like the people I’m watching football with, and my sense of separateness from other people in general. I think this is the existential dimension of my relationship to the game: I’m making myself sit in a room and invest in the outcome of a situation I have absolutely no control over. When I think about the absurdity of that investment, it reminds me that attaching to and obsessing over the other aspects of my life that I can’t control is equally absurd. It’s not a useful metaphor for life because it’s like war or because it literalizes man’s struggle to subjugate other men or anything like that; it’s a useful metaphor for life because it’s a delusion we all consent to believe is real and important and also subject to our control.

Also, a few weeks ago at Ye Rustic, I met Igor Khoroshev, who from 1998 to 2000 was the keyboardist for the rock band Yes, and if I hadn’t started watching football there’s virtually no chance that would ever have happened.