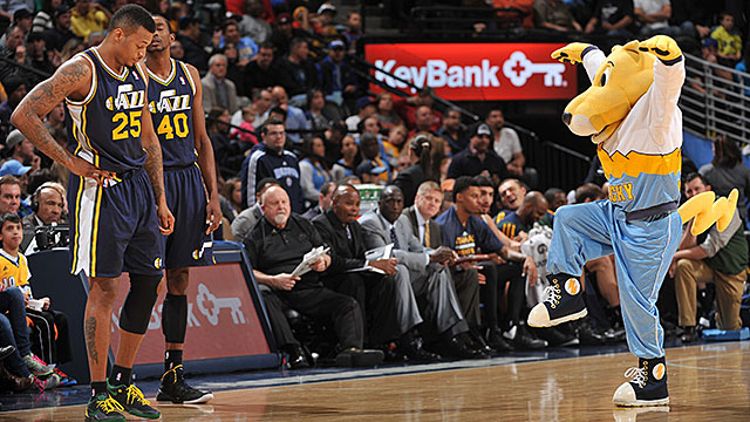 The NBA season is 82 games long, and for fans of many teams, to watch those games is to enter an endless, Kafkaesque hellscape that lives outside of time. Non-fans simply avoid the sight of such teams unless some other interest-inducing factor compels them to watch.

The Eastern Conference is a wreckage of bad luck, poor stewardship, and strategic losing. New York and Brooklyn expose 8 million people, several times a week, to the smoke coming off mountains of burning cash and melted credit cards. Boston is the 4-seed at 12-14 and Jordan Crawford — JORDAN CRAWFORD! — won Eastern Conference Player of the Week by virtue of solid play and the postapocalyptic East-West talent gap (Crawford — who, again, has played well — being Eastern Conference Player of the Week is like Rick Grimes being the leader of your zombie-world survivor coalition because he owns a sheriff’s hat). Milwaukee is probably the very worst team in the NBA after being set upon by the Wisconsin winter, freak lower-body injuries, and its defensive destroyer Larry Sanders tearing ligaments in his thumb while fighting on a dance floor that appeared to be covered in margarine.

The West, though embarrassingly stronger than its toothless Eastern cousin, still has the Utah Jazz (currently the worst defensive team in the league, giving up 108.8 points per 100 possessions) and the Sacramento Kings (sixth-worst defensive team in the league, hemorrhaging 104.8 points per 100 possessions).

So, there’s a lot of badness out there, and it can test the resolve of even the most committed basketball fan. But there are ways of coping. We can rise from these ashes. Here’s how to survive the season of bad basketball.

Think of the Draft

You may not have heard this, but the 2014 NBA draft is projected to be the best infusion of young talent since the 2003 LeBron-Wade-Bosh-Melo (David West–Josh Howard) class. Sidebar: shout-out to my man Michael Sweetney, last seen holding it down in Puerto Rico, and by that I mean literally holding the island of Puerto Rico down and keeping it from floating away. Chad Ford says the 2014 class could have as many as eight All-Stars, and Dick Vitale’s orgiastic play-call moans are approaching the level of feral cats boning on a midsummer’s night.

Smart GMs have seen this train coming and have done their best to lie down in front of it: gutting their teams, stockpiling picks, and, if not actively trying to be bad, definitely not trying to be good. Philadelphia’s Sam Hinkie has taken it next-level by having the Sixers play at a paint-peeling 101.9 possessions per 48 minutes, thus, as first pointed out by ESPN’s Tom Haberstroh, giving themselves more opportunities to get beaten by stronger teams and pumping up the stats of players the team might want to deal for even more picks. Not to mention Hinkie infecting early-season buzz-rook Michael Carter-Williams with some kind of rare tropical skin-eating fungus.

Then there’s Orlando (8-17), which bounced back from the Dwightmare with a clutch of young players and has two swings at a home run in the 2014 draft (its own pick plus the lesser of Denver’s or New York’s); Boston, which preyed on Brooklyn’s win-now, #YOLO instincts by sticking the Nets with KG’s headphone-bedecked corpse, the Aged Truth, and Jason Terry while prying loose four first-round picks, including one in 2014; and Denver, which owns the first track off of Masai Ujiri’s The Dolan Blueprint: Volume 1, currently projected to be the third pick, and the surefire schadenfreude hit of the summer.

The Knicks and Nets may be locked out of half the drafts between now and 2050 because of their mutually assured asshat dance of myopic future-killing haymaker deals, but there are still silver linings if you know where to look. Ignore the W’s and L’s and focus on the unlikely second acts of players returning from the injury void or rookies beginning to blossom. Brooklyn’s Shaun Livingston — who, in 2007, suffered one of the most stomach-turning injuries in NBA history — has never looked springier in his post-injury NBA career. The Knicks have the eye-opening play of Tim Hardaway Jr. — the son of one of their greatest antagonists — to think of once they reach the acceptance stage of the five stages of grief, and Andrew Bynum recently had a stretch where he played some of his best post-bowling basketball.

Milwaukee might have the league’s worst offense, worst rebound percentage, second-worst NetRtg, a panoply of player injuries, and the languid flapping of vulture wings circling above its decrepit arena … But it also has the league’s best human-interest story in Giannis “Greek Freak” Antetokounmpo, a rangy 6-foot-11 small forward with a ceiling that’s in a better state of repair than the Bradley Center’s, and who has taken to flashing the antlers after big 3s, causing Bucks Twitter to erupt with joy. The only obstacles to Giannis’s NBA journey were little things like poverty, the tattered Greek economy, and rising right-wing anti-immigrant sentiments due to said tattered economy. The only way you cannot root for him is if you’re a supporter of the Golden Dawn party.

Sometimes the icy breath of winter, coupled with abject basketball, can make one question the point of it all. Life is short, why do this to yourself? Luckily, we live in the Wi-Fi-enabled second decade of the 21st century, and not 1952 with all its awful, obvious racism and big-band jazz music. We can live out all varieties and flavors of wish-fulfillment fantasies through the glowing touch screens of our modern gadgetry. When I get down, I turn off trade restrictions in NBA 2K, build a dream team, skip to the playoffs, and win the title. I might even turn up my offensive sliders and turn down the computer-controlled team’s sliders to make it easier. Video-game purists turn up their nose at such tactics, to which I say, if you prefer a sense of accomplishment, raise a child to become a functioning adult. I’ll be over here trading Anthony Davis, Steph Curry, and LeBron onto the Knicks and letting the waves of virtual confetti wash over me like warm angel’s tears.

Appreciate the Play-by-Play Crews, Whose Job It Is to Watch This Mess

Imagine for a moment that you are Mike Breen, sitting courtside at Madison Square Garden, watching the poorly constructed product of an incompetently run franchise perform yet another variation on losing in the free-jazz shambles that is Mike Woodson’s tragi-coaching suicide note. Or being the unflappable Ian Eagle, presiding over a Nets blowout loss as a sullen, addled crowd boos the exhortations of its dreadlocked P.A. announcer. Or being the ever-excitable Austin Carr, as the disjointed Cavs lurch about for an identity, while Anthony Bennett wheezes up and down the court. Imagine being part of the play-by-play crew of one of the myriad awful 2013-14 NBA teams. How would you deal with the constant stream of losing while having to convey game information in an entertaining and informative manner? Would you affect an air of nondenominational professionalism, or live and die with each mistake and bricked layup? Each analyst has a different method, with different strengths and weaknesses.

Utah Jazz play-by-play man Craig Bolerjack keeps his voice preternaturally even and supportive, taking every opportunity to find an empty glass half-full, like when Derrick Favors air-balled a six-foot hook shot by two feet in the third quarter last week against the Spurs. Bolerjack responded to that miss with “Once Derrick Favors perfects that little baby hook … oh, what a shot that’s gonna be.” The Jazz went on to lose by 20.

Annoyance
Breen’s usual breezy professionalism has been steadily punctured by the Knicks’ losing-by-a-thousand-cuts methodology. Upon seeing yet another terrible Knicks sequence, Breen might lower his voice to a grave, serious baritone, reserved for when your dad talks about your F in math with the neighbors. Or, he might wrap an end-of-game debacle in the tones of a man who just got cut off in traffic, amazed at the casual recklessness of the offending driver.

Unhinged Insanity
After the Cavaliers beat the Denver Nuggets, 98-88, on December 4, Carr, in his signature gravelly bleat, screamed, “This will be a shot heard 'round the world! Around the league!” Austin Carr, calm down.

Unshakable Technical Perfection
Eagle is not only among the best, if not the best, play-by-play men in the business, he’s also the best blowout play-by-play man. He never lets the dark tendrils of despair and disappointment mar his impeccable delivery. His ability to turn on the sportscaster-excitement-voice jets for big plays by the opposing team never flags. And when his team is finally beaten, he pitches his voice to just the right frequency to convey the seriousness of the loss without any hint of personal frustration. Ian Eagle is the Terminator of NBA broadcasters.

• Strong drink (must be 21; please drink responsibly, but enough so the feeling go away)

• Have an affair with another team — a good team, with exciting players and a shot at winning it all. It doesn’t mean anything; no one has to know.