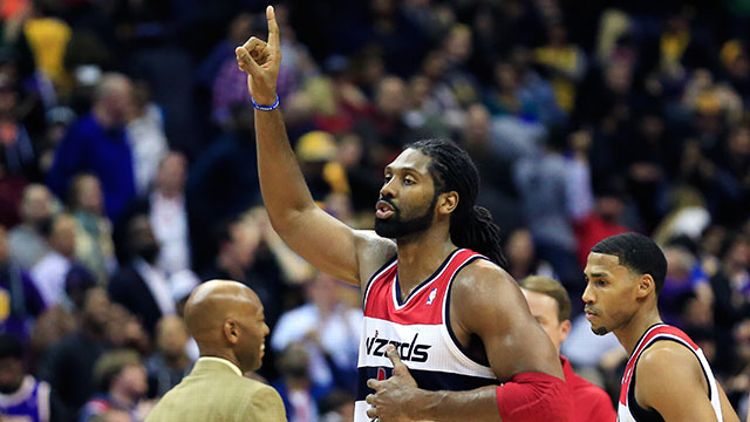 The Wizards are 7-32 without Nene in the lineup and are 42-46 with him since trading for him at the 2012 deadline in exchange for JaVale McGee, JaVale McGee’s antics, and various flotsam. That stat says a lot about both Nene’s splendid all-around skill set and the medical issues that have sadly torpedoed his impact over and over.

Nene is out again, nursing a right foot injury, but he’s practicing with the Wizards. He took time out after a practice this week in New York to chat with Grantland about his health, the Wizards, his career, and his future.

My Achilles, it’s better. It’s progressing. It’s still a little sore. It’s hard to warm up, and get relief.

Do you have a return date in mind yet?

We’ll see day-by-day. Today, I played a little bit, and we’ll see how I feel tomorrow.

You have any idea what caused this one? Just wear and tear? Or something specific?

It’s just a lot of minutes, and a lot of physicality for me, you know? I get a lot of pounding on my body. But it’s a good thing. Now I can take care of it a little bit.

You mean it’s good you spotted it early in the season?

Yeah, but I started young, and the position I play — the intensity they play on me is different.

Do you believe someone can be injury-prone? Meaning, in dealing with all these injuries, have you learned something about your body that might explain why you’ve had trouble staying healthy?

Click here for all of our interviews with fascinating people from the worlds of sports and pop culture.
Yeah, yeah. I’ve had a lot of injuries all of my career. I’ve learned about my body. I know when something is gonna happen. But sometimes you can’t control it. Sometimes you need to just do it, to just play. I try of think of ways to avoid injuries, but I’m getting paid a high price. But when you get some experience, you learn a little bit, and you learn how to take care.

Andrew Bogut is another guy who has been hurt a lot, and he gets angry when people call him injury-prone. Does that label make you angry?

No, the good thing is, all my injuries, I’ve learned something. I saw something about myself. And life is not in my control. It’s in God’s control. It is all for a reason.

The injuries have made you sort of an underappreciated player. You’ve never been an All-Star, right?

When I had the possibility, I did not, because it was my wedding.

Ah, yeah. I remember reading that. You said you’d skip the game regardless, because you couldn’t bail on the wedding.

And after that, it was a little politics, but I don’t worry about that. I always say I worry about my team. I don’t want to be around the All-Star Game anyway.

You remind me a little bit of a big-man version of Andre Iguodala — a guy who does a little of everything, but not a lot of any one thing, and as a result doesn’t get a ton of attention or fame.

I like that. I like Andre. The good thing is that people who really know basketball, they know my game. They know what I’m doing, and what I do to help my team. And that’s what matters. The All-Star Game — that’s no big deal for me.

No, I don’t care about stats. I really don’t. I care about winning and losing. I actually care more when I lose because, you know, I always look for what I can do better, where I made a mistake, where the team made a mistake.

Here’s a stat I’ve always wanted to ask you about: Your teams always rebound better when you are on the floor, but you get a lot of criticism for not getting a lot of rebounds yourself.

But it happens every year, in terms of team rebounding. What’s going on there?

If I don’t box out, if I try to steal the ball from my teammates, I could average 13 rebounds or 14 rebounds per game. But I learned the right way. I learned to box out, respect each side of the hoop. There’s a reason we have better rebounding when I play, because I know the fundamentals.

Did you know about that stat?

Yeah, yeah, I think I heard that.

So it’s just about boxing out.

Exactly — not only on the low block, but in the whole paint. The guys outside have to box out, so the little guys don’t surprise you down there.

You do notice a lot of players just sort of stand under the rim, kind of boxing out an area, instead of finding a player to box out.

That’s the way they learn. It’s not that way in the international schools.

You once said you’d retire before the 2016 Olympics in Brazil. Do you stand by that now?

[Laughs.] Well, the Man makes the plan. The answer — yes or no — comes from God. I hope I can finish well, that’s all I can say. I mean, at that time, there was a lot of frustration, a lot of anger. My plantar fasciitis was just killing me. And when you’re not able to perform the way you want, when your body won’t allow you to perform, you start to think about retirement.

So you might play longer, is what you’re saying. Or you’re open to it now.

Yeah, like I said — the Man makes a plan. God will give you a yes or no.

Will you play in the FIBA World Cup in 2014 if Brazil gets a wild-card bid?

I don’t know. I had injuries in the past, and that gave other players the opportunity to play, to develop a little bit, to get experience. The season here, in the NBA, is almost 115 games if you make the playoffs. [The Brazilian Basketball Confederation has] no clue what it is. At the end of the season, you need rest. You need to calm yourself down a little bit.

Have the Wizards and Nuggets ever told you explicitly not to play for Brazil in the offseason, or at least said they would prefer you didn’t?

They always say, “You need to take care of yourself. You need to be smart. Say ‘no.'” But when you look at the national team, you can’t control very much. You know how it is. Hopefully they change their mind about players who play in the NBA, because it’s a lot of games, a lot of pounding on your body.

Last year, Bradley Beal told me you yell at your teammates if they don’t cut to the right place when you have the ball. Kevin Seraphin was standing next to Beal, and he started laughing, saying you’re always yelling mean things. Is that true?

Oh, man, I don’t yell that bad. It’s like, “Come on dog, pay attention! Read a little bit!” That’s the way I learned. I think that comes from soccer.

Being a sort of naturally unselfish player, you mean?

It’s more like visualizing. You need to see things before they happen. When a player runs along the field, and you want to pass the ball, you need to see two points. [Nene holds his two index fingers about a foot part, illustrating a passing trajectory.] You need to see the connection.

It’s the same thing in basketball.

Do you really yell at Kevin Seraphin, though?

Do you keep in touch with George Karl? You played for him for a long time, you’re both recent cancer survivors …

No, not really. I didn’t have time to keep in touch with him.

Did you root for the Nuggets in the playoffs last season?

You know, when I got traded, I really didn’t care about the Nuggets anymore. And that is normal in this league, with trades. I still have friends inside there, and I have a lot of fans supporting me. But you know how it is.

God put me with [the Wizards] to help, and this team is completely different since I came. That makes me feel good. When you make somebody else better, that’s the best thing. There’s a lot of players who think about themselves, but that’s what makes me happy. My coach, even with my injuries, this team always has my back. They chose me.

Earlier this season, after a loss to the Spurs, you said the young players on this team had to “take their heads out of their butts and play the right way.” Have they done that? And what did you mean by that?

When I said that, it was a frustration moment for the whole team. I have experience to know how to play your best, because I came from an international school and then played for a winning team in Denver. It was a normal reaction I had. You have to play the right way. The Spurs — they know how to play basketball. I was really frustrated.

What were guys doing wrong?

We did a lot of things wrong. But we started playing the right way now. We started enjoying each other and playing for each other.

Your dogs are named Dora and Diego. I assume that’s because of the TV show?

Ha … Yeah. They look like humans, and they are siblings. That’s the reason.

That’s a kids’ show, and you got the dogs before you had a son. Are you a secret Dora fan?

You might be the angriest dunker in the league. I’m afraid you’re going to hurt your right arm sometimes going at the rim like that. Why do you do that? Have you ever hurt your arm?

Not really. I don’t know why I do that. Sometimes there is something problematic on my mind. Sometimes, I’ll try going easy, but my body overreacts like that. If somebody tries to block it, my body automatically goes hard. And that’s a good thing.

You dunk angry even when nobody is there.

Sometimes I surprise myself.

The Knicks drafted you and then traded you right away. You’ve said before you don’t like big cities. Could you have played here? Do think about what it would have been like?

I’m very competitive. The way they traded me — they didn’t even get to know me a little bit. They didn’t try to understand me. But it’s fine. The Nuggets gave me an opportunity. I had a great career with the Nuggets. And the New York fans say to me now, “Maybe you were supposed to play here.” They always ask if I wanted to play here: “We need you here. You’re supposed to be here.” I say, “Yeah, but …”

How good can this Wizards team be? How far could they go in the playoffs?

I’m very honest in my comments, Zach. If I say we’re gonna be in a certain place and we don’t get there, then it will be against my words.

Look at the Eastern Conference. You guys could easily win a round in the playoffs.

But that is just saying something. It is just words. We need to work. I prefer to work game by game, win those games, you know. And then we’ll be where we are in the end.