How to Pick Your Draft-Day Hero 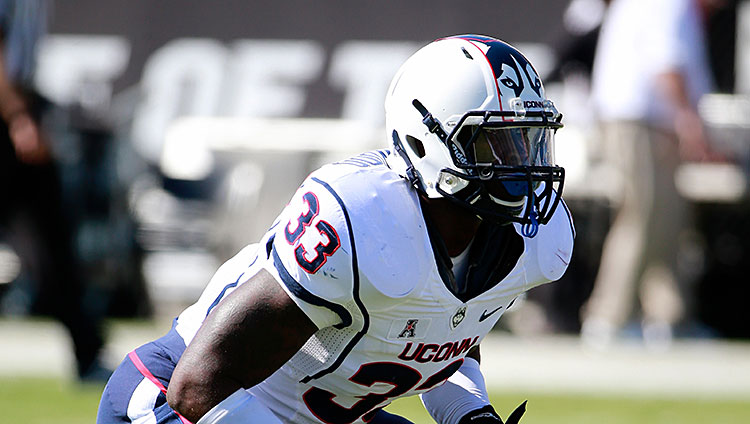 As a form of entertainment, the NFL draft is almost perfectly designed to be uninteresting. If you’re a fan in the biblical sense — monogamous, one team — you get that great thrill of the first-round pick. Past that, it’s mundane chaos and cameras trained on Teddy Bridgewater’s face as he falls to the seventh round because GMs decided he doesn’t closely enough resemble Ryan Leaf.

But we have a solution. The raisins in the bread of the draft are the personalities, the human characters. Problem is, most NFL fans know little to nothing about the non-quarterback, non-Clowney 20-to-22-year-olds populating draft boards. The key is this: Like your favorite degenerate gambler at the local greyhound track, you need to choose a dog in the race. Not a literal dog, although canine companionship — here’s a good dog— can be a major plus while enduring hours of a sporting event in which the greatest feat of athleticism is walking across a stage. Rather, you need to choose a player whose fate you can wed to your own. Bored by the draft? You won’t be as your golden boy slides further and further out of the guaranteed money and you empathetically start flop-sweating like Ted Striker and stress-eating Snickerdoodle Chex Mix.

If you go into a bar and order “any shot,” Ray Liotta will scream at you and funnel tequila down your throat — that’s American law. Similarly, if you try to choose just any player, you will be paralyzed by variety and confusion. Here’s how you narrow down the field.

1. Pick a Range of Schools

If you’re an alum or a fan of a certain university, you can’t choose one of their players, because that’s cheating and you already know these guys too well as autonomous humans to pretend they are avatars of you. I happen to think Notre Dame is college football’s version of the Dave Matthews Band and that it’s weird how the Pac-12 keeps finding their coaches at clubs named Bungalow, so cross all those places off the list.

A quick scan of the NFL’s draft tracker drop-down menu reveals colleges with names like Angelo St., Mary Hardin-Baylor, and Univ. of the Cumberlands, which all sound awesome, but we want a player who’s actually going to get drafted. Let’s aim a little more mainstream. The Big East was fun because it barely took a leap of the imagination to see the whole conference as just an overly complicated front for the mob — now, with the American Athletic Conference, we don’t even need to pretend! Perfect.

As someone who was once told by a tailor that he has the same measurements as Elijah Wood, I do not understand the finer points of offensive line play. And, as a fan of the team that once chose Vernon Gholston sixth overall, defensive linemen give me PTSD. If you have a pulse or a personality, you’re already following the quarterbacks. Anyone who picks a punter or kicker is the kind of person who will only drink beer they brewed themselves. With Richard Sherman turning into General Patton last season, defensive backs have reached a new level of ecstatic dickishness, and linebackers offer a wide variety of maniac. Let’s stick with those.

We’re not looking for hardware-carrying flyboys — the goal here is to be the only person, other than this guy’s family and girlfriend and agent, who cares about whether he gets drafted or not. Plus, it’s important that you can give yourself as much credit as possible if he gets picked higher than projected and as much blame as possible if he slides. If you don’t feel culpable for his draft performance, you did this wrong. (That being said, you do not need to let your draftee know this is the case. Please do not try to meet your draftee.)

Hometown kid who made good? Exotic import who conquered a new kingdom? Underdog walk-on who ascended from the practice team to the starting lineup? Overdog five-star recruit who stumbled at first before refining himself into a gym-rat skill player? Hyper-arrogant physical freak who never practiced and treated college like Leaving Las Vegas? Mental freak? Freakishly handsome? Freakishly un-handsome? Looks like Hodor? Looks like Drake? The world is yours. If no one fits your ideal narrative arc, pick the closest thing and fill in the gaps on your own. This is sports, son: It’s all hagiography anyway.

This is pretty straightforward: How rad is his name? It should be rad.

And there you have it. My search has led me to one man: Yawin Smallwood, inside linebacker for 3-9 UConn, a Butkus Award semifinalist from Worcester, Massachusetts, projected to go in the fourth or fifth round. He led the Huskies in tackles for two consecutive years. He’s a talented player on a spiraling program, a man who single-handedly held his squad together as long as he could before, with the blessing of his coaches and teammates, taking his talents pro. (I do not know if this is true.)

I will ride and die with Smallwood. If he gets picked in the first three rounds, I will take off my shirt and Vine myself singing Prince a cappella; if he’s chosen in the fourth or fifth, I’ll go to a public place and solemnly reassure strangers that he’s great weekend value; if he slides to the sixth or seventh, I will post a hysterical status on Facebook and unfriend anyone who doesn’t like it; if he goes undrafted, I will rend my garments and wear the colors of mourning for a full week.

And you thought the draft was boring.

Why Are We Doing This in May?

We Are All Prisoners