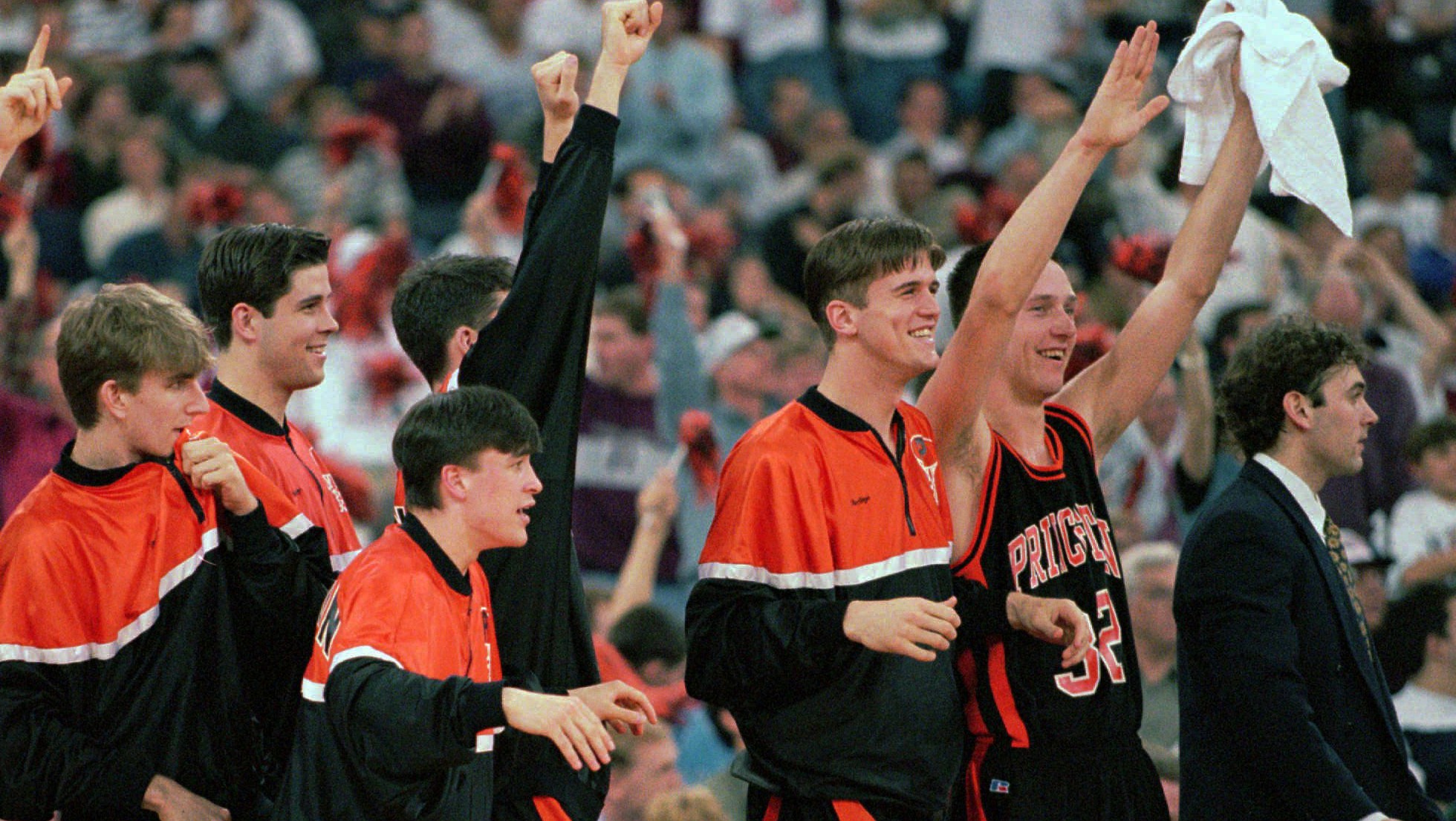 I was cranking away on a column Monday when I glanced up at the TV and saw a replay of Princeton back-cutting UCLA to death in 1996. It’s that time of year — the three days after Selection Sunday, when ESPN replays all the classic March Madness moments: Bryce Drew’s hook-and-ladder, Jimmy V begging for a hug, Tyus Edney going coast-to-coast, Gordon Hayward barely missing what would have been perhaps the greatest shot in basketball history, and Christian Laettner ending the best game I ever saw.

There must be hundreds of guys, stars and bit players along the blurry edges of history, who know that during those 72 hours, they will appear on television over and over. It must be a weird feeling: “There I am, again, grinning like a lunatic or weeping in public.” I smiled at the memory — I recall exactly where I was during that Princeton upset — and went back to typing, when, bam, a close-up of someone I recognized held on the screen for five straight seconds: 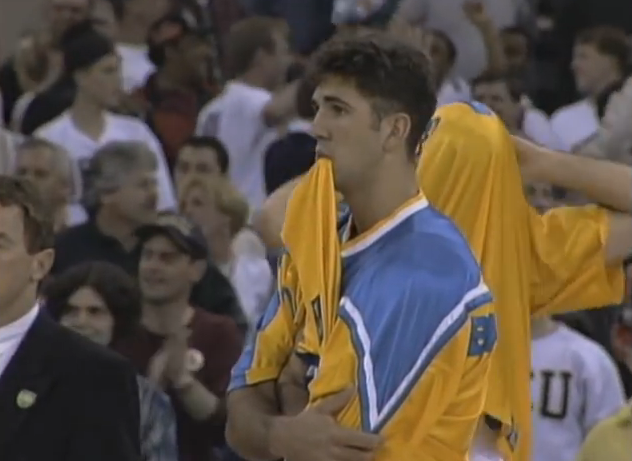 That’s Bob Myers, then a UCLA reserve, now the general manager of the Golden State Warriors. Princeton had just gone up, 43-41, over UCLA with 3.9 seconds left on — duh — a backdoor layup. The Bruins, defending champs that season, called timeout two seconds later, leaving Myers to ponder what had just happened. He had no clue that he would become the portrait of UCLA misery on national television. This is apparently the face you make, jersey in mouth, when you realize a bunch of Ivy Leaguers just ended your championship defense before it ever really got started.

All the Grantland coverage of the 2015 NCAA tournament, right here.
I knew Myers had played at UCLA during their run as a mid-1990s juggernaut, and I had seen this clip probably dozens of times without paying any attention to the identity of Sad Guy. After nearly 20 years, Myers is used to his mid-March uptick in TV time. “It’s fun, especially early on,” Myers says. “People in my circle expect it now. The novelty is kind of gone. You feel that the first couple of years, and then you realize, wow, they are going to show this every year.”

Myers remembers being worried when UCLA drew Princeton in the first round. “They just play such a unique style,” he says. “And you know they are not going to beat themselves.” Myers, a walk-on at UCLA who planned at first to join the crew team, knew Ivy League hoops. During his junior year in high school, when he was coming off the bench, Myers wrote a letter to the coach of Dartmouth College wondering if he might schedule a meeting should Myers visit the campus in New Hampshire. Myers didn’t hear back, visited anyway, and never met the coach, he says.

He knew Princeton well enough to appreciate their team-first approach and attention to detail. “You never want to lose, but I was happy for them,” Myers says. “They played the right way. It was good for college basketball. That was the only game I felt like I was quicker than our opponent. I never felt like that in Pac-10.”

Princeton negated UCLA’s giant edge in athleticism by milking the (endless) shot clock and sending all five guys back in transition immediately after a shot attempt. “They were the only team I’ve ever seen do that every time.”

Here’s the good thing about playing for a multiyear powerhouse team: You get more than one chance to be in the foreground of some iconic NCAA moment. Flash back a year, and there’s Myers butting his way into our collective memory as the first Bruin off the bench to mob Edney after that famous coast-to-coast sprinting layup to save UCLA’s season against Missouri: 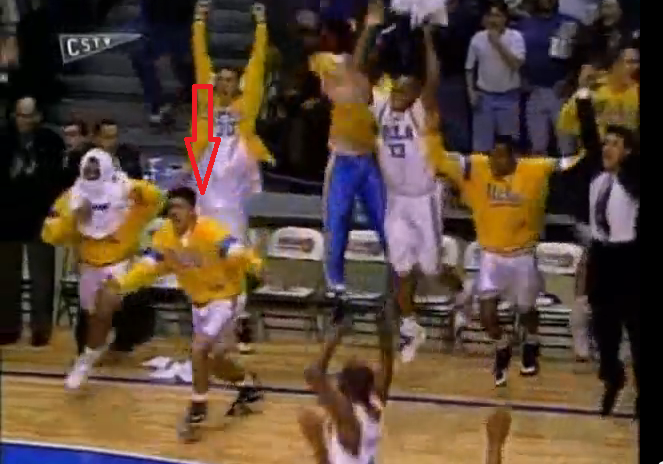 “I probably ran onto the court before time expired,” Myers says. “I was positive it was going in. I had a good angle from where I was sitting.” Myers bolted out there so early, you wonder what his Plan B was had Edney missed. Collapse on the court? Sprint into a U-turn toward the locker room?

A photographer snapped the moment Myers lifted Edney off the ground, and Sports Illustrated used the photo on the cover of its commemorative issue honoring the team. 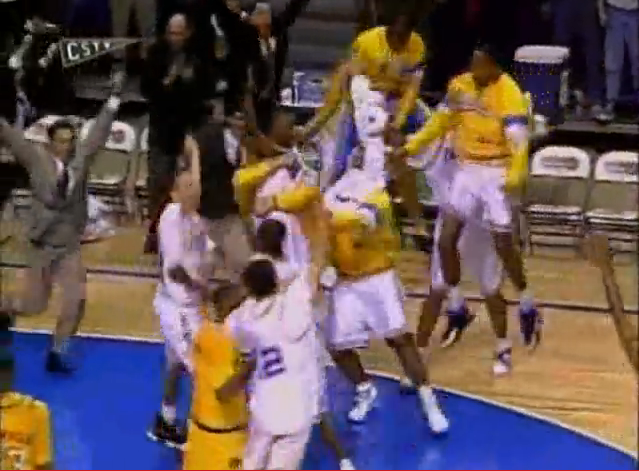 “My face is where it should be — hidden by his body,” Myers says. “That’s appropriate, me lifting up a starter who won the game for us.” Myers has that issue, and Kirk Lacob, the Warriors’ assistant general manager, recently gave Myers a framed image displaying the Edney layup as an X’s-and-O’s diagram with encircled uniform numbers for each player and lines charting their paths. There is no marker for Myers standing on the bench or leaking out on the court.

The Bruins were among the overall favorites that year, and Myers remembers thinking in the seconds leading to Edney’s shot that it was a shame the better team would lose — even though the March Madness format is popular precisely because it injects that kind of randomness. Missouri got unsustainably hot from deep, and UCLA was about to go home early. “It was not supposed to be this way,” Myers thought.

Edney saved the day, and guaranteed that Myers would be the best kind of TV extra for the rest of his life. Princeton gave him the opposite sort of moment a year later.

“I got the joy of victory and the agony of defeat,” Myers says, laughing. “I’ll say this: I prefer the Tyus one.”