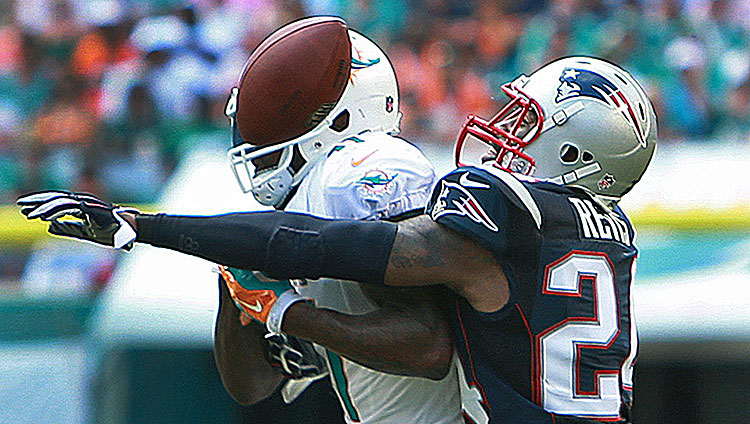 Let’s throw a question out there. (We’ll make like Aaron Rodgers and not throw it in the direction of Richard Sherman.) How can we be confident that the NFL’s best cornerbacks are elite independent of their defensive schemes?

Take the case of Nnamdi Asomugha, who developed a pristine reputation last decade, making an All-Pro first or second team four times despite playing for an abysmal Raiders franchise. His free-agent signing in 2011 was one of the reasons the Eagles received the “Dream Team” moniker. But Asomugha was released after two underwhelming seasons (and an onerous contract) in Philadelphia, and he retired to little fanfare following a short stint in San Francisco.

Elite cornerbacks can have lengthy careers, so it is unlikely that age alone caused the precipitous decline of Asomugha, who joined the Eagles at 30. Charles Woodson is 37 and still forcing turnovers with the Raiders,1 while 36-year-old Champ Bailey visited the Lions on Tuesday after being released by the Saints before Week 1.

The most common explanation for Asomugha’s quick decline in Philadelphia is that a talented man-to-man cornerback struggled in a zone defense. Unable to use his 6-foot-2 frame to influence receivers at the line of scrimmage, Asomugha labored to keep up with faster players. And that realization — that a shutdown cornerback might have his skills diminished by being in the wrong defensive scheme — led to a whirlwind of activity in free agency this offseason.

Although a blockbuster trade that brought Darrelle Revis from the Jets to the Buccaneers in 2013, he quickly slipped under the national radar because of Tampa Bay’s problems with both staff and staph. It’s not accurate to say he struggled, what with Revis being named Pro Football Focus’s top cornerback one season after tearing his ACL.2 But with new Bucs coach Lovie Smith importing a Cover 2 defense that relies on team speed and forcing turnovers, Revis and his $15 million contract just weren’t considered a worthwhile expense.

And Revis was only one revolution of this offseason’s cornerback carousel. The Buccaneers first signed Alterraun Verner from the Titans; that enabled the Buccaneers to release Revis; he signed with the Patriots one day after they lost Aqib Talib to the AFC champion Broncos; and shortly thereafter, Dominique Rodgers-Cromartie left the Broncos to sign with the Giants.

With the specter of Asomugha’s struggles in the recent past, how did those cornerbacks fare in Week 1 after absorbing their new playbooks? One strong game certainly doesn’t guarantee success, but massive struggles might indicate that the transition will be a difficult one.

Revis had a mixed performance in his debut with the Patriots, who have been yearning to find another shutdown cornerback in the vintage of Ty Law or Asante Samuel. (Talib also did an admirable job last season.) He spent the game at left cornerback, giving Mike Wallace a huge cushion whenever he matched up with the speedy Dolphins receiver.

It was a reminder that good coverage doesn’t always dictate good results, and vice versa. Revis was draped all over Wallace, even deflecting the pass on Wallace’s 14-yard touchdown reception. The inverse happened when Wallace beat Revis by two yards on a deep play-action pass; Ryan Tannehill delivered the ball too close to the sideline, and Wallace could keep only one foot in bounds in the end zone.

All five of the throws into Revis’s coverage area were to Wallace, who also picked up 22 yards on a deep cross but had the other two attempts knocked away by Revis’s perfect timing. 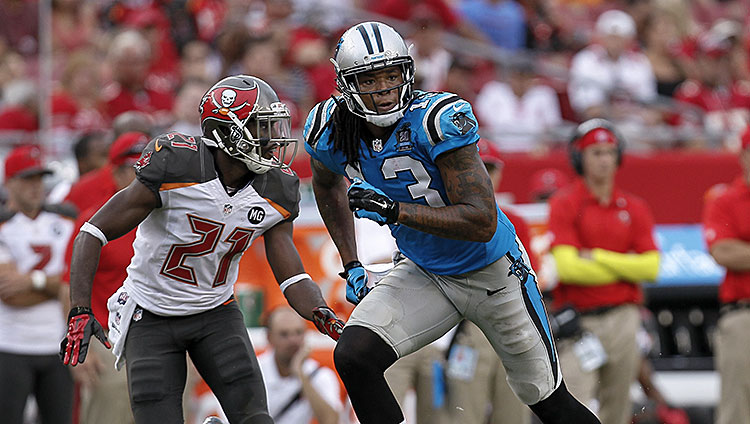 Verner certainly wasn’t to blame for Tampa Bay’s surprising loss to a Carolina team missing Cam Newton. He was targeted only once, immediately dragging down Kelvin Benjamin after a 4-yard slant on third-and-16 despite giving up seven inches and 60 pounds to the rookie receiver. By adding four solo tackles near the line of scrimmage, Verner finished Week 1 as Pro Football Focus’s top cornerback.

Verner won’t have the luxury of facing Derek Anderson every week, but after making the All-Pro second team last season, the lack of targets makes it clear that Verner has earned the league’s respect. 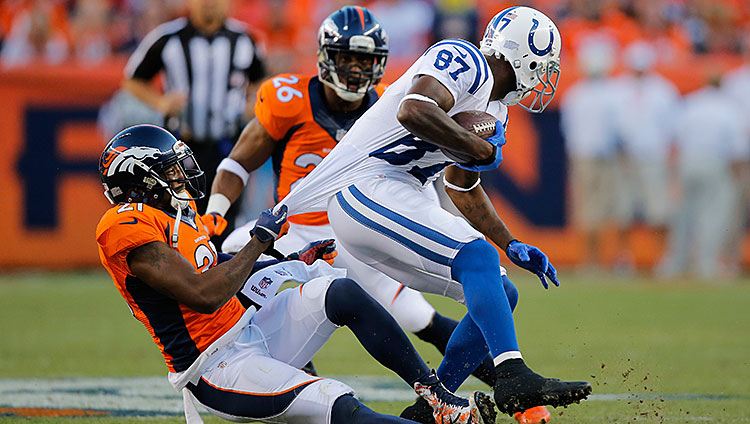 Talib was targeted early and often, but he allayed the damage (giving up five receptions for 70 yards on 10 targets) by making some big plays when the ball came his direction. He jumped a post route by Dwayne Allen, deflecting the ball toward safety Rahim Moore for an interception, and prevented a touchdown pass to T.Y. Hilton by breaking in front of the slant with his left hand.

The big question for Talib is whether he can stay healthy. He has battled hip injuries throughout his career and hasn’t ever played a full season; when Talib was knocked out of the playoffs last season by a violent Wes Welker hit, the Patriots soon followed.

The ugliest performance by a cornerback in new scenery was Rodgers-Cromartie, who had a strong 2013 season with the Broncos. He allowed six completions for 126 yards and a touchdown in his Giants debut, allowing Matthew Stafford to compile a 146.8 passer rating when throwing in his direction. Granted, Rodgers-Cromartie was often opposite the best receiver in the league, but it would have helped if he’d spent more time covering Calvin Johnson and less time tackling teammate Stevie Brown.

There was one other big-name cornerback who changed teams this offseason, with Antonio Cromartie leaving the Jets for the desert air of Arizona. Cromartie played well in his Cardinals debut, allowing only two catches for 9 yards. His long-term impact, though, might be changing how we view two cornerbacks who are already the faces of their franchises.

One of the biggest squabbles of the offseason was whether Sherman or Patrick Peterson is the best cornerback in the league. Despite the rise of sabermetrics, it is still difficult to quantify a position that involves literally trying to prevent numbers from being accumulated. Arguments must become more aesthetic, and one brandished by Peterson fans is that he shadows the opponent’s top receiver around the field, while Sherman consistently stays on the left side.

According to Pro Football Focus, there were only four shadow corners in the NFL last season — Peterson, Joe Haden, DeAngelo Hall, and Johnathan Joseph. (Peterson covered the opponent’s no. 1 receiver 55 percent of the time, while Sherman did so only 27 percent of the time.)

Sherman was true to form in Week 1, staying on the left side and making it easy for the Packers to avoid targeting him at all; they simply lined up no. 1 receiver Jordy Nelson on the opposite side and never threw toward Sherman. But then, in the Arizona–San Diego game, something surprising happened: Peterson also stayed put. He spent 58 of 62 snaps on the left side of the field, according to Pro Football Focus, and on one of those other four snaps, Peterson allowed Malcom Floyd to beat him inside for a short touchdown.

Sherman, always eager to yap, was quick to note the schematic change on Twitter:

Looks like everyone is keeping their corners on their side…. That makes me laugh ….#Trendsetters

It’s too early to tell if Peterson’s role will permanently change, now that he’s playing opposite Cromartie, but it’s worth keeping an eye on this season. If Peterson, Sherman, and Revis continue to stay anchored, the data gained will be a boon for NFL analysts. Is this strategy better for the defense, which has to cover less space by shutting down one-third of the field with only one player, or is it better for the offense, which can target its top receiver more easily?

Regardless, it’s clear that cornerbacks prosper if their secondary is full of other dominant players. Sherman benefits from his teammates, which include All-Pro safety Earl Thomas, Pro Bowl strong safety Kam Chancellor, and cornerback Byron Maxwell. And now Peterson finds himself in a similar scenario, with Cromartie and rookie strong safety Deone Bucannon new additions to the unit alongside free safety Tyrann Mathieu.3 Cornering the market must have never felt so good.