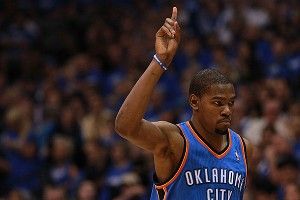 The Oklahoma City Thunder started the fourth quarter of their series-clinching Game 4 against the Dallas Mavericks trailing by 13 points. With Russell Westbrook on the bench, the Thunder started the quarter with James Harden as the primary ball handler. When the team began running pick-and-roll plays for Harden, coach Scott Brooks found a mismatch that allowed the Thunder to get back in the game and eventually complete a sweep of the defending champions.

The Mavericks’ big men struggle to hedge against the pick-and-roll. Dirk Nowitzki and Brendan Haywood aren’t mobile enough to step out and contain the ball handler, and Ian Mahinmi lacks the experience or defensive instincts necessary to get in proper position consistently. Facing Harden, who possesses an excellent feel for the game and the ability to get to the rim or make the right pass, none of the Dallas bigs could match up. On their first possession of the quarter, Oklahoma City forced Dirk Nowitzki to defend a pick-and-roll.

Nowitzki was guarding the screener, Serge Ibaka, and Dirk had to hedge out against Harden when he used the screen. Nowitzki played it correctly, leaving Ibaka and hedging out flat to prevent Harden from penetrating. However, Nowitzki just doesn’t have the athletic ability to stop Harden. 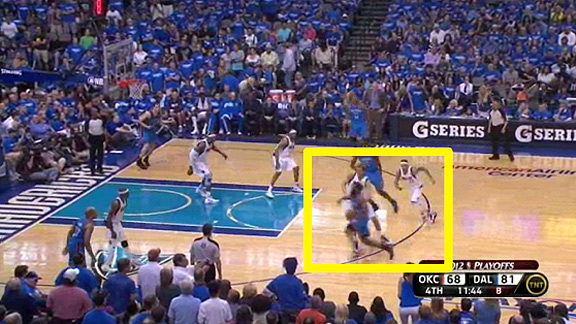 Harden reads the situation and understands that he can get by Nowitzki. He uses the screen, drive into the lane, and when the defense collapses on him, Harden passes to Daequan Cook for an open 3-point shot.

Much like Nowitzki, Brendan Haywood is too slow to hedge on screens effectively, so the Thunder attacked him as well.

Here, Haywood is covering Nick Collison, who sets a screen for Harden. Because of his limited mobility, Haywood needs to get in position early, so he hedges well before Harden starts to use the screen. (In fact, Haywood hedges before the screen is even set.) Once again, Harden makes a great read. He sees Haywood hedging too early and decides to reject the screen. Look how far out of position Haywood looks when Harden drives away from the screen. 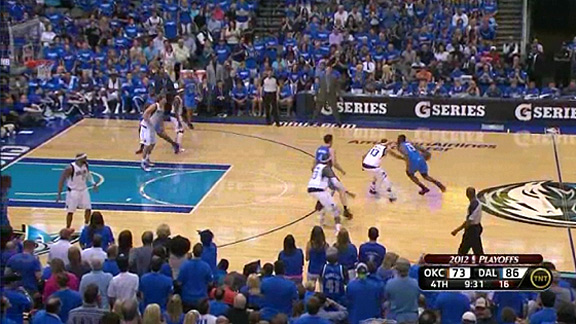 Harden’s decision allows him to attack Delonte West from the top of the key, and he manages to score while drawing a foul, drawing the foul. Chalk up three more points for the Thunder comeback.

Eventually, Dallas coach Rick Carlisle substituted Ian Mahinmi for Haywood, but Mahinmi, who is quicker than Haywood, just doesn’t have the experience to defend ball screens effectively, and the Thunder were able to exploit his defense as well.

Here, As Ibaka gets in position to set a screen, Mahinmi over-pursues. He chases Ibaka out past the 3-point line, thereby taking himself out of position to hedge against the ball screen Ibaka sets for Harden. 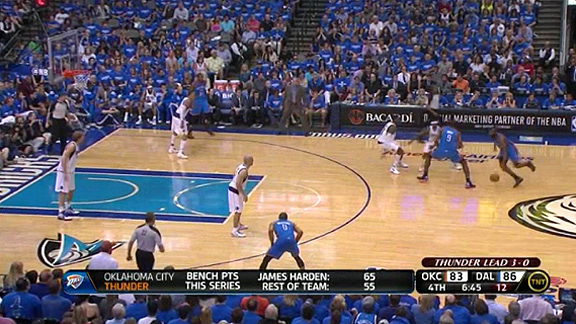 With Ibaka setting the screen out past the 3-point line, keeping Harden out of the paint shouldn’t be too difficult. But because of Mahinmi’s over-pursuit, Harden gets a clear lane to the basket and Dallas’ remaining defenders are left in a tough spot. Nobody steps up, and the result was an emphatic dunk that signified the beginning of the Mavericks’ end.

The Mavs’ defense on screens was so bad that Carlisle switched to zone to try and stop the pick-and-roll. But Oklahoma City stuck with their high screens and scored five points on the two possessions that Dallas played zone.

Harden’s pick-and-roll play was so effective that Kevin Durant and Russell Westbrook played supporting roles. Here, the Mavs zone defenders got beat because they were ball-watching. On the first possession, Harden uses the screen and quickly passes to Westbrook, who penetrates and kicks for a Durant 3-pointer. On the second possession Durant catches the ball on the wing, then drives baseline for an easy dunk.

Oklahoma City’s stars, Durant and Westbrook, deserve a lot of credit for their willingness to let Harden run the show. Any time Durant or Westbrook grabbed a rebound, they passed to Harden to initiate the pick-and-roll offense, and they were ready to preform whenever they received the ball.

Scott Brooks also deserves praise. I have criticized Brooks for letting his players rely on isolations too much at the end of games. With a talented roster like the Thunder’s, a coach doesn’t need intricate plays, but simple pick-and-rolls can be very effective and produce better results than isolations. I’ve also griped that the Thunder tend to get away from what they do effectively during the last five minutes of games. But none of that happened Sunday. Oklahoma City stuck with the pick-and-roll throughout the fourth quarter and scored 24 points on the 12 times they ran the play. This was a great fourth-quarter performance, and it should scare the Western Conference’s remaining playoff teams, because if the Thunder consistently finish games like this, the team will have almost no flaws on offense.