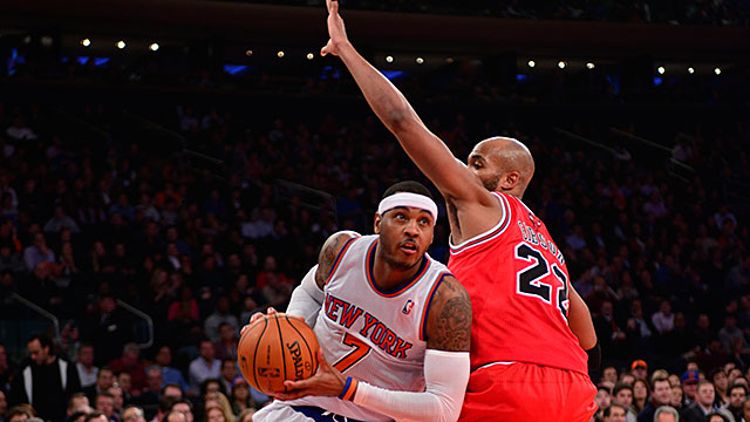 Earlier this week, Grantland ran a Q&A between Zach Lowe and Boston Celtics head coach Brad Stevens. Among the fun tidbits of basketball knowledge sprinkled throughout this was an interesting conversation about post play.

Here is the short exchange:

Analytics folks say the post-up, or at least a post-up shot, is a low-efficiency play. But there’s a way to reconcile that, right?
There are two ways to get inside-out: driving or posting.

In other words: The post-up is more a vehicle for passing and other shots, rather than necessarily for a post-up shot itself?
It’s a vehicle for playing inside-out. That’s right.

That back-and-forth inspired an interesting question (asked in the comments by reader Parker Ryan): Is a post-up — one of the most common ways to score across all levels of basketball — really an inefficient play?

To find an answer to that question, we have to look at the basic anatomy of the play itself. A strict back-to-the-basket (though a player can face up from that position) post-up usually occurs anywhere from the block to mid-post on either side of the floor. The result of most of these situations, on the NBA level at least, are jump hooks or turnaround jumpers. So despite the image you might have in your head of a player going to work deep in the paint, right near the basket, the actual shot results are typically short to midrange 2s anywhere from roughly four to 12 feet from the hoop. As the analytics movement has told us, shots from those locations produce a worse points-per-possession outcome than the three key scoring areas on the floor: at the rim, behind the 3-point line, and at the free throw line.

That isn’t to say that post-ups can’t ever generate any of those efficient looks. There are certain things that can be trained into a player’s game — the use of fakes with the ball to draw fouls, counters such as spins and step-throughs to get shots at the rim — to produce the type of results empirical data has shown to be the most productive. The problem is, even with the right approach, it’s impossible to expect any player to consistently get to the line or to the rim off a post-up.

In a way, post attacks in the NBA are really something of a paradox. On one hand, a player posting up has to possess enough skill (or have a big enough strength/height advantage) over an opponent to convert short- to medium-range shots, while occasionally creating opportunities at the rim or drawing fouls. Without this, using a post-up like a “vehicle” for better shots, like Stevens states above, becomes much more difficult. Smart defenses will simply force nonthreatening players to try to score in one-on-one matchups. The tricky part comes when a player proves capable of doing so. At that point, it becomes using the threat of his scoring — and not the scoring itself — to produce efficient looks.

Last season’s Knicks, the 2011 Mavericks, and the Stan Van Gundy era Magic subscribed to this philosophy. Those teams used great individual threats — Carmelo Anthony, Dirk Nowitzki, and Dwight Howard, respectively — to create as many efficient looks as possible (primarily 3s in the case of the Knicks and Magic). To counter this, some coaches around the league are warming to the idea of a strict “no double-teams” policy in their defensive philosophy, a major change from even the recent past, when nearly every player with even a middling reputation as a post scorer was met with endless waves of double-teams. The idea for those Magic, Mavs, and Knicks teams, as Stevens was suggesting to Lowe, wasn’t only to get the best out of Howard, Nowitzki and Anthony, but to allow their individual brilliance to create openings for either uncontested 3s or clear driving/cutting gaps to the rim that allow for layups and fouls.

But as we’ve seen with Anthony, a player hell-bent on finishing for himself off a post-up (or isolation) can drag down an entire offense, even if he’s converting a high percentage of his own shots. Anthony is brilliant when it comes to creating clean looks for himself, and that prompts double-teams or shifts from an opposing defense. The problem is that Anthony falls into the trap of not using those double-teams to create better looks for his teammates nearly as often as he could.

On the other hand, there are players like Washington’s Nene. The Brazilian big man ranks in only the 61st percentile converting chances against single coverage in the post, according to the Synergy Sports database. Because he’s not on the same level as Anthony when it comes to putting pressure on a defense, Nene, a willing and skilled passer, produces middling results when moving the ball out of a post-up — he ranks only in the 58th percentile on passes from the post to spot-up shooters.

It’s with players like Nene where the inefficiency of post-ups starts coming to light. Despite ranking worse in the latter category, those passes out to shooters produce a PPP (points per possession) rate of 1.143. In comparison, Nowitzki ranks sixth in the league (minimum of 25 attempts) with a PPP of 1.137, according to the Synergy Sports database. That means Nene, despite a middling effectiveness as a post player, creates better offense simply by passing out of a post-up than the future Hall of Famer does by taking a shot.

This isn’t a universal trend. Not every player is substantially better at passing out of the post rather than scoring for themselves. But the trend generally does suggest that the most efficient play out of a post-up is a shot by someone other than the player posting up.

So the answer to the question above is both “yes” and “no.” A post-up, for the vast majority of players, is generally an inefficient way to score. Yet by finding players who excel in such an uneconomical action, NBA teams are presented with the opportunity to unlock opposing defenses and extract the efficient shots they crave.

Is Everton for Real?