Does James Rodríguez Fit In at Real Madrid? 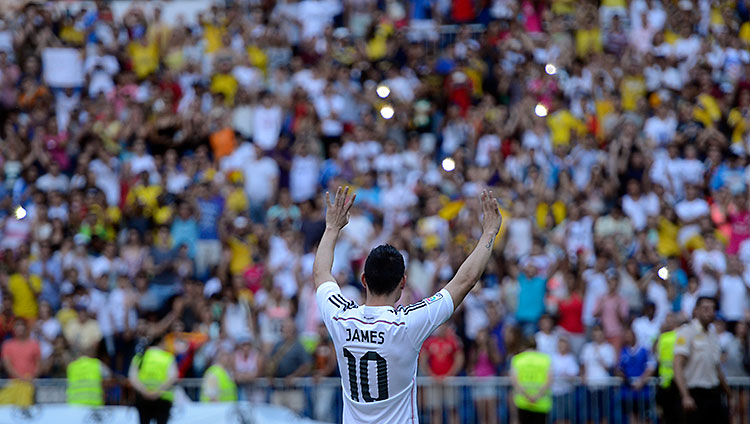 Normal rules do not apply to Real Madrid. President Florentino Pérez laughs at your Moneyball. He mocks your concerns over things like value. Real Madrid are different. They are the best team. They have the most money. Whoever they want, they get. Pérez is the man who brought Ronaldo (both of them) and Zidane to Madrid. Last summer he bought Gareth Bale. This summer is no different. World Cup superstars James Rodríguez and Toni Kroos are the latest addition to the current iteration of the Galacticos, while Ángel di María seems to be on his way out.

This is what Real Madrid does. Will it work? That’s another question entirely.

Let’s start with the issue of price, mostly so we can get it out of the way. Price just doesn’t matter to Real Madrid. They make more money than any other soccer club in the world, and it’s not particularly close. Madrid care about overspending on a new player about as much as you do about shelling out $50 for a new video game. So the question, when considering Madrid’s purchase of James for a reported £63 million (as well as, to a much lesser extent, the team’s purchase of Kroos), isn’t “Did they spend too much?” Of course they did. It’s “Did they pick the right superstar to spend too much on?”

Given that they won the Champions League last year, it’s easy to forget how close Real Madrid came to abject failure. Before a late final comeback, the team was staring at a season with only a Copa del Rey victory to show for its troubles. And while it seems silly to classify a season that would have featured a domestic cup, a third-place league finish, and a Champions League runner-up medal as a disaster, when you’re Real Madrid, expectations are a bit higher. If Gareth Bale hadn’t scored in extra time to lead his team back over Atletico, it’s very possible Real manager Carlo Ancelotti would have been out of a job.

Of course, Real beat Atleti, 4-1. Had this been a different club, that might have been enough to give Ancelotti a second year with largely the same squad. Ancelotti instituted a new 4-3-3 system when he arrived at the Bernabéu, with a Ronaldo/Benzema/Bale front line supported by Xabi Alonso playing deep in midfield for the trio, with Luka Modric running the show and di María in a hardworking, industrious, shuttling role. But rather than have a second year to perfect what he installed in the first season, Ancelotti gets to deal with two new stars (so far), and almost assuredly the exit of di María (and likely Sami Khedira, as well, who was injured for the vast majority of last season anyway).

We all saw what James is capable of when he lit the World Cup on fire for Colombia.

He’s most comfortable as either a traditional no. 10, where he played for country, or a right winger, where he played for Monaco in the French league. The problem is, last year’s bright young thing is already ensconced at the right wing position, and the 4-3-3 doesn’t have a no. 10. That leaves Ancelotti with three options. First off, he could try to fit James into di María’s old role, but that’s just asking for trouble. Sure, James can do all the transitional stuff di María does — carrying the ball forward at speed, picking out passes, making runs into the box. And some of those things, like shooting, crossing, and passing, he does significantly better than the man he’d replace in this scenario. But those skills are only the on-the-ball part of the game. All the off-the-ball stuff — the tackling, the tracking back, covering deeper when Modric moves forward — that’s not what James does well. Asking him to do it is like buying a sports car and taking it off-roading.

The second option for Ancelotti is changing the system around to something that looks a little bit more like a 4-2-3-1. Benzema would play the striker role with Ronaldo, James, and Bale behind him, and then Modric and either Kroos or Alonso in the double pivot. That’s probably an OK option against weaker opposition, but it’s incredibly lightweight defensively against better foes. Modric needs freedom to move around to use his passing skills to the fullest, and Alonso has aged past the point at which he can play in front of a back four without help. Meanwhile, Kroos’s best position is in the attacking band of three behind a striker, not as part of the double pivot. He can do the latter, as he showed in the World Cup final against Argentina, but he’s more effective playing farther forward, as he demonstrated in the semifinal against Brazil. Also, the switch from a 4-3-3 to a 4-2-3-1 means more defensive responsibilities for the wide men. Part of what made Bale and Ronaldo so lethal last year was that with a three-man midfield protecting them, they could both stay relatively high, hitting on the counterattack. Asking either of them to defend takes away from what was Madrid’s greatest strength.

Option 3 rests somewhere in the middle: James isn’t guaranteed a starting spot. Sometimes he spells Bale; sometimes, against weaker competition, he plays as a member of the three-man midfield, playing more like a 10 than a midfielder.

It’s a less glamorous option for Madrid, since their big purchase won’t be a featured player, but it’s not without precedent. Last year Madrid bought Isco from Malaga — an extremely talented, young attacking midfielder. Despite being Madrid’s biggest non-Bale acquisition, the then-21-year-old started only 29 games between La Liga and the Champions League. That seems like a likely path for James to follow. Although you have to wonder exactly where that leaves Isco, who’s still on the roster.

Real Madrid have an embarrassment of attacking riches. The challenge is fitting those riches together without sacrificing defensive coherence. It’s a problem Carlo Ancelotti is well versed in, and perhaps the primary reason Real hired him. During his time in charge of AC Milan, Ancelotti frequently figured out ways to shoehorn an absurd number of attacking players into the same lineup. After a bit of a slow start last season, he figured out how to do it again for Real Madrid. This season, the challenge remains the same.

For Real Madrid, especially under the leadership of Pérez, winning with an abundance of attacking superstars is an ethos, every bit the same as using tika-taka is for Barcelona, or a high-flying press-and-counter is for Borussia Dortmund. When you’re Real Madrid, it’s not enough to win — you have to win your way. For Real Madrid, that way is going out and buying today’s biggest stars while shipping out yesterday’s slightly older versions. If that makes Carol Ancelotti’s job slightly harder? Well, that’s just another price Real Madrid are willing to pay.

How Kyle Korver Was Blinded by Jeff Hornacek's Advice

"He never met a lawsuit he didn't like,'' said Pierce O'Donnell, one of Shelly's attorneys. "We hope at this point that Donald realizes he can't run out the clock forever.''