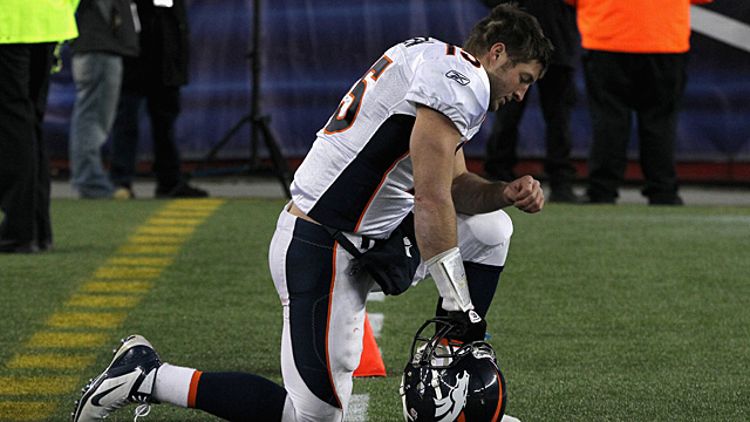 Every now and then, we will attempt to write the worst sports column on earth. Today: Let’s talk about Tim Tebow and the New England Patriots and hope.

This one wasn’t in the playbook, folks.

In case you forgot, the media wanted Tim Tebow to fail.

He was supposed to walk away.

Guess somebody forgot to tell Tim.

Just when you thought it was over, we found out Monday afternoon the Tim Tebow show is just getting started. ESPN’s Ed Werder broke the news. Tebow will sign a deal with the New England Patriots, and by Tuesday he’ll be right back where he belongs. In pads and cleats, working to get better. Running. Throwing. Leading.

Tebow and The Patriot Way? A match made in heaven.

Say what you want about Tim Tebow the quarterback, but Tim Tebow the person just oozes class. And there’s not a classier organization in football than the New England Patriots. At its core, The Patriot Way is all about team. Where nobody wants credit, or respect, or highlights, or swag. They want results. They want character guys. There’s a higher calling in New England, where they don’t just win, but they win the right way, and then they go back to work. These are facts.

So, think about it.

Could you imagine a better fit for the kid who only knows how to win and never knew how to quit?

In retrospect, the only surprise is that it took this long for Tim to end up with Tom’s Brady bunch.

It’s perfect. As Chris Berman once said, “I don’t care whether people are Packers fans or whatever, I’ll reiterate what we said, rooting for Favre is like rooting for America.” That’s how it feels with ol’ number 15 and these Patriots.

Getting here hasn’t been easy, but of course it hasn’t.

Nothing worth doing ever is.

Tim was never given anything in this life. This quarterback was something like a Hail Mary, himself. Too short. Not athletic enough. Bad mechanics. They said he couldn’t play quarterback. He was always a longshot. In college he turned into a superstar, he proved everyone wrong. When he got to the NFL, all he ever did was win. He impressed me, he impressed you, he impressed everyone.

But then Tim found out the hard way: Negativity sells with today’s media.

So the more he won, the more he was crucified for poor decisions and poor throws. Eventually, all the negativity got him shipped to New York City, and that was a whole other story. He came to Manhattan pregnant with hope, but destined for an abortion. Rex Ryan was never going to give him a real chance.

Eventually, the Jets and that band of clowns laughed him right out of town. A winner surrounded by sinners can only do so much. And that was supposed to be the end of Tim Tebow in the NFL. The media won, and Rex got a jolly chuckle out of the whole thing.

We’ll see who gets the last laugh in September.

As for the Patriots? For years now, they’ve been struggling to live down the stench of that one grave miscarriage of justice. Spygate. When Bill Belichick stopped going with the character that got him there and started cutting corners.

Ever since 2007, it’s like karma’s been running an all-out blitz, sacking the Patriots every single year. One misstep, and they’ve never danced the same way again.

And I can’t help but notice the timing here.

If you read the news, there’s another kind of spygate dominating headlines these days. America’s Spygate. Whistleblowers are in the news, but nobody’s talking about Coach Belichick. Instead, morale is at an all-time low, we can’t trust our leaders, and the whole train is running right off a cliff. Now, we don’t have to get too political here, but wouldn’t it be nice if America had something to cheer for again?

Maybe Tim Tebow can be that something.

Maybe this Patriot act is what saves us.

Maybe this is what New England’s needed all along, and Tim Tebow is the guy who comes in and stiff arms all that bad karma on the way to the Super Bowl. Maybe the playing field is America, the game is life, and Tim Tebow’s here to turn all of us Patriots into champions again. Do you believe in miracles?

All I know is that Tim Tebow believes in hard work.

And even when nobody believed in Tim Tebow, Tim never forgot to believe in himself. Running. Throwing. Leading. Forever.

Now he’s back where he belongs. On a football field, in the huddle, making plays. You might see all this and ask yourself: When are sports bigger than wins and losses and columns?

When we watch a football player, and suddenly we all forget how to complain and learn how to compete. When this injured world gets a cortisone shot full of hope. When a player takes the field in minicamp, turns teammates to friends, turns coaches to fans, and turns us all to believers.

Apologies to the media’s playbook, but this Hail Mary is just getting started.