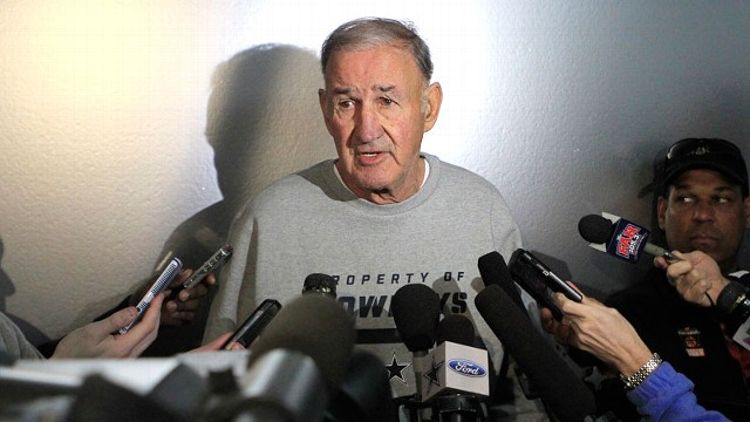 In the latest installment of this series, there was a look back at the Chicago Bears’ checkered history of drafting offensive tackles. The swings and misses of the Jerry Angelo era have left the team with question marks all along its offensive line, and considering those holes, it would make sense for the team to spend this offseason addressing its issues up front. The Cowboys are in a similar position, only their issues aren’t a product of Jerry Jones swinging and missing — they’re a product of him not swinging at all. Right now, Tyron Smith is the Cowboys’ only reliable starter on the offensive line. He also happens to be the only high draft pick the Boys have spent on the position in the past decade.

It would seem that the one thing Dallas can’t afford to fuck up this offseason is getting Tony Romo some protection, but again, Jerry’s logic is on a bit of a different track. “If you’re going to have a guy operate behind an offensive line that can handle a porous offensive line, it’s Tony,” Jones said, according to the Fort Worth Star-Telegram. “Tony has some of the best percentages operating behind pressure situations of anyone in the NFL. If there were a place theoretically that you had to have a weakness with Tony Romo at quarterback, that might be a place to have it. You just can’t have it all.” Unless you’re Jerry. Then you can both own the team and be the GM — in this case, the GM keeping that team from any sort of real success.

Jones says that with another year, and with the help of experienced offensive line coach Bill Callahan, Dallas can be an improved group up front. And from the sound of it, it doesn’t look like Jerry is willing to change his ways or his thinking about how his teams are built. So, if the Cowboys are going to fuck up the one thing they best not, the next concern on the to-do list is probably the team’s defensive transition.

If Jones has a leg to stand on, it’s that while his offense features the team’s weakest unit, his defense was the weaker side of the ball. By Football Outsiders’ DVOA metric the Cowboys were 12th on offense, but 23rd on defense, and by weighted defensive DVOA (which deemphasizes early-season games), they were actually 30th. That late-season drop-off was enough for coordinator Rob Ryan to lose his job, thus allowing Jason Garrett to keep his.

Replacing Ryan is 73-year-old Monte Kiffin, who returns to the NFL after four seasons at his son Lane’s side on the college level. Kiffin was the Buccaneers’ defensive coordinator for 13 seasons — from the mid-1990s through Jon Gruden’s firing in 2008 — and is generally considered the founding father of the Cover 2 defense.

The switch from Ryan’s 3-4 front to Kiffin’s 4-3 means a change for the defense’s three best players from a year ago. DeMarcus Ware has been one of the three best defensive players in the NFL for the past five years, but in Kiffin’s scheme, he’ll be asked to move from his standup rusher role to a more traditional defensive end. Bruce Carter and Sean Lee — who enjoyed the best seasons of their careers before injury — will be asked to move from inside linebackers to weakside linebacker and middle linebacker, respectively. Each has the skill set to make such a transition, and although Ware may need some time to acclimate to playing with his hand on the ground, he’ll likely be fine in time. The questions are how Dallas will man some of the other spots that are now glaring amid the change in scheme.

One of those issues was taken care of by franchising fellow outside linebacker turned defensive end Anthony Spencer. Dallas lacks depth behind its front four of Jason Hatcher, Jay Ratliff, Ware, and Spencer, but at least the starters there are set, experienced, and effective. The same can’t be said behind them.

Dan Connor is the likely candidate to start as the linebacker on the strong side, but he’s a career backup who seems to have the job by default. The more pressing need is deep in the secondary. Brandon Carr and Morris Claiborne are Dallas’s long-term pairing at cornerback, but the recent release of Gerald Sensabaugh leaves a substantial hole at safety. Barry Church, who’s coming off a season-ending Achilles injury, is set to start on one side after signing a four-year extension last season, but it’s anybody’s guess who will line up next to him.

That player may be available with Dallas’s 18th overall pick in the form of Texas safety Kenny Vaccaro. One of the few redeemable parts of the Longhorns’ defense last year, Vaccaro is the best safety in this class — but for Dallas, that might be the problem. Without any clear competition at the position, Vaccaro could shoot up the draft similar to the way Mark Barron did last season. If Vaccaro isn’t there, that’s when things have a chance to come back around. There isn’t an outside linebacker worthy of the 18th pick (it’s a position Dallas likely will address further down the draft) but considering a few recent developments, there might be a guard. Guards usually fall further than they should anyway, and with his lackluster combine showing, Alabama star Chance Warmack could be there when Dallas drafts in the first round. This time, Jerry might just get this right, all in spite of himself.