Hard Knocks, Episode 1: Marvin Lewis Is Immortal, and James Harrison Is Not Safe for Work 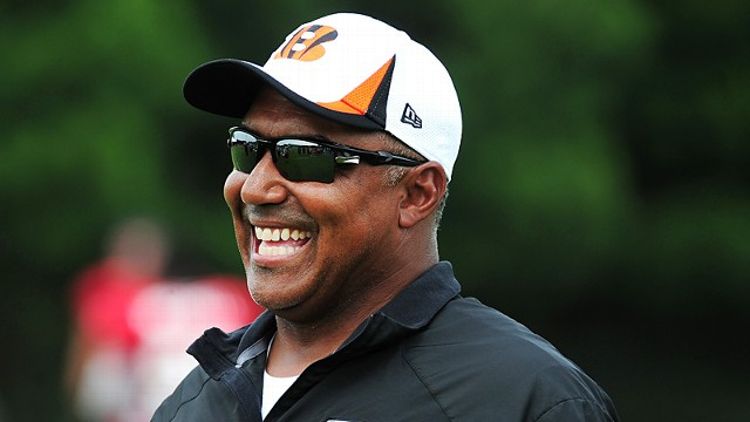 HBO’s Hard Knocks returned last night. Thank God. Training camps have been in full swing for the past week or two, and there’s been some preseason football, but all that is pretty hard to get excited about. The first episode of Hard Knocks is when it really feels like we’re getting football back in our lives. FINALLY.

To celebrate the occasion, let’s break down what went down on HBO last night. Like these slow-motion highlights with Nina Simone, and then a marching band remix of Nina Simone:

NFL Films people are so much better at their job than I’ll ever be at my job.

Speaking of jobs, congratulations to Marvin Lewis. He is now (1) the second-most tenured coach in the NFL, (2) forever a punch line waiting to happen, and (3) a coach who’s made the playoffs for three of the past four years. Only one of those things makes sense to me, but hey, here we are. Marvin Lewis will not die.

What else did we get from the Bengals in Episode 1? Glad you asked!

James Harrison is not safe for work

I had no idea James Harrison was still in the NFL, so seeing him pop up on the defense Tuesday was a pleasant surprise. And he’s every bit as insane as you remember, so that’s fun.

For one thing, it seems James Harrison is not a fan of the NFL Films camera crews, as we saw at least three occasions where he locked them out or turned his back from the camera crew. Not in a Chad Johnson, zany prank kinda way, but in a “James Harrison, these cameras are total bullshit get away from me” kinda way. At one point, somewhere between watching him destroy a fullback and slam the door on the camera crew, my roommate said, “He might beat the shit out of a cameraman before training camp is over.”

I mean, he probably won’t. But he might! I’d watch a solid 30 minutes of camera crews harassing Harrison, at least until it ended in a murder.

There was also the Bengals linebackers meeting, with Harrison sitting apart from his teammates, all by himself himself facing the wall. Kind of like a serial killer. Better to just pretend it’s normal than ask him to face the projector and risk aggravated assault in the meeting room. As Marvin Lewis explains Harrison: “He just kind of goes through life with an edge to him.”

This is all a helpful reminder that professional football is a ridiculous sport full of insane, unhealthy individuals. ISN’T IT GREAT?

One of the best scenes of the episode came when a Bengals coach was joking with Harrison about not hitting Green in practice, then Harrison came back dead serious saying he’d light him up if Green came across the middle.

Cue nervous laughter from the coach.

Harrison laughs, too … but is still dead serious about hitting Green if he comes over the middle. “I ain’t gonna kill him,” he says. “But I ain’t gonna let him get his job done.”

It ends with the coach saying something like, “We’re on the same page, right?” Harrison laughs, says yes, and embraces him, and may still intend to destroy Green. You can’t totally tell.

The Bengals coach as they separate: “But seriously, don’t hurt this motherfucker.”

Teammate: “I’ve hit trees before. … That didn’t sound like a tree.”

[Cameras cut to some poor delivery man’s broken windshield across the street.]

The best random moment of the episode. It’s those little things that make Hard Knocks so much fun. Granted, it would’ve been better if it were just Burfict destroying a car windshield with his bare hands, but watching him play golf was a solid consolation. It’s always fun watching great athletes suck at golf, because it makes me feel a lot better about sucking at golf myself.

(Second-best random moment was Pacman Jones running out of gas on his way to the first day of training camp, then leaving his car on the freeway for his wife to pick up. THE LEGEND CONTINUES.)

(Worst random moment was watching undrafted rookie Larry Black go down with a broken leg and a dislocated ankle, then fighting through tears afterward. So awful.)

It’s completely hypocritical to be horrified by the NFL’s concussion issues and then burst out laughing when a team publicly follows protocol. I know. But still.

You know someone at NFL Films is getting a $10,000 bonus from commissioner Roger Goodell for working that scene in. If it happens again next week, we’ll know for sure that Ginger PR Forces are playing with our reality here.

Really though: Who was more adorable?

On one side … rookie running back Gio Bernard was driving a minivan, and thanks to some stealthy work from the accompanying cameraman he was forced to acknowledge the scrapbook that he keeps with his longtime girlfriend — with a collage of photos on the cover — where they “just write each other little notes and stuff.”

On the other side … Dalton rocks a rubber wedding band on the field. And in meetings. And interviews. And everywhere, I guess. It’s marketed to “guys who are more active,” he explains. He refuses to take it off for practices and games, and it’s not technically banned by the NFL’s uniform policy, so his only punishment is taking endless shit from his coaches and teammates.

For the record, both these guys are winners because they’re staying true to their heart and they don’t care who knows. But if it’s a competition, the winner is definitely the guy who’s driving his girlfriend’s mom’s minivan. Pretty sure we’re all Gio Bernard fans now.

Everyone loves the Oklahoma Drill, but good god, I used to hate the Oklahoma Drill when I played football. Because I was a giant sissy as a pudgy 13-year-old. I mean, I still am, but at least now I’m smart enough to not play football. The Oklahoma Drill — one-on-one, two guys crashing into each other with one winner — is one of those drills that supposedly exposes your manhood, and in eighth grade I had NONE. My most vivid memory of football was at eighth-grade summer football practice running the Oklahoma Drill, and me somehow getting matched up with our starting linebacker, who was twice my size.

We run the drill. I get destroyed.

Coach: “C’mon Sharp, you’re better than that. RUN IT AGAIN.”

We run it again. I crumple into a pile of self-loathing and weakness. “Sharp, seriously, you’re not even trying. AGAIN.”

I bite down on my mouthpiece and throw myself into the linebacker, just hoping for the best. “Square your shoulders, use your legs.”

We probably ran that stupid drill a solid 10 times in front the entire team, just me getting obliterated over and over again. Playing football is not fun if you’re a pudgy eighth grader who’s still 18 months away from puberty. Having said that … you know what’s 10 times better than running the Oklahoma Drill? Watching the Oklahoma Drill.

It’s football boiled down to its most ridiculous, testosterone-drunk essence. Watching the Bengals destroy each other was great, but just as good was seeing how excited the whole team was while watching everything. When tight end Jermaine Gresham challenged hell-beast defensive tackle Geno Atkins to the Oklahoma Drill, Jones was off to the side looking like a giddy 8-year-old. When Gresham jumped the snap to get into Atkins early and wound up pancaking him, the entire team went nuts, and the greatest scandal of Episode 1 was born. Hopefully it continues all month. As Gresham told cameras afterward (with Atkins glaring at him), “I cheated, I was offside.”

“But you saw what happened …” he added.

I’m forever thrilled I don’t have to go through awful football practices anymore, but watching actual pro football players do it will never, ever get old. Can’t wait for next week, when we’ll either get James Harrison throwing a chair at some helpless cameraman or maybe a Gresham-Geno gladiator rematch in the Oklahoma Drill. Or maybe both.

Q&A: Joe Dumars on the Suddenly Exciting Pistons and the Toughest Player He Guarded (Not Named MJ)