Group B Is a Blockbuster: A Tribute to the Netherlands, Chile, Spain, and Australia 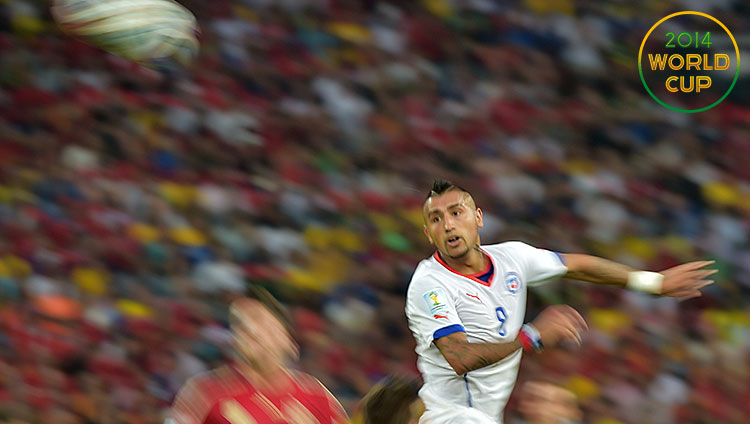 Group B is over. There’s still one more round of games to play, but we already know who’s going through and who’s going home. Usually that would be a bad thing. Usually a group decided early means no drama. Two good teams thrashed two bad teams, and all that’s left is jockeying for position and playing for pride. Well, “usually” has taken a vacation from this World Cup.

The biggest story line to come out of Group B will likely be the sharp, sudden demise of Spain’s generation of dominance. And it probably should be. For the last six years, Spain has combined talent with style to form a unique and indelible identity. It has won two European championships and one World Cup in the kind of run you rarely see in any sport. But eulogizing Spain is probably best left for another time. A time when there aren’t two other incredibly entertaining teams that just ran roughshod over the defending champs, earning their own moment in the Brazilian sun.

First, there’s the Netherlands. This was supposed to be a down year. Unlike in 2010, when the team was filled with international superstars, this year’s Oranje was basically two guys you know (Arjen Robben and Robin van Persie), two guys you were probably trying to locate (Wesley Sneijder and Nigel de Jong), and a bunch of kids you’d never heard of. Oh, and the month before the tournament, Dutch manager Louis van Gaal decided he was going to completely change tactics and move to a defensively oriented, lightning-fast counterattacking 5-3-2 formation. This is a man who had managed Ajax and Barcelona. Imagine Gregg Popovich surveying his team in training camp, looking at the personnel he had at his disposal, shrugging, and saying, “Let’s play hero ball.”

Now imagine the Spurs going out and blowing everyone’s doors off. That’s the Netherlands.

Which is not to say this team is without its problems. It’s had to come from behind in both of its group-stage victories, including yesterday’s thriller with lowly Australia.

Let’s pause for a second to admire Australia’s first goal from Tim Cahill. Without the contributions of Cahill and Australia to play entertaining underdog (as opposed to cannon fodder), this group wouldn’t be nearly as fun as it is.

Back to the Dutch: They have some questions to answer. But they’re questions like, “How do we tighten up our back line in the knockout round?” A week ago they were, “Are we really sure this whole World Cup plan is a good idea?”

And then there’s Chile, the team that delivered the finishing blow to the listing Spanish battleship.

First through a sublime and skillfully built goal:

And then when Spain decided to close up shop for the season:

This Chilean squad is full-on adrenaline-pumping, high-wire-walking, batshit insane, while also beloved by soccer tactical nerds everywhere. It’s a rare combination. The team plays an extremely up-tempo, aggressive pressing style that was instituted by Marcelo Bielsa, the coach from 2007 to 2011. Bielsa has spawned a number of branches that have reached around the globe, bringing with them this distinct brand of barely controlled anarchy. Chile, in fact, tried to move away from Bielsa’s influence after the coach left, hiring Claudio Borghi. He lasted a grand total of eight months before Bielsa disciple Jorge Sampaoli brought the crazy back.

And the crazy really can’t be overstated. Chile has one natural central defender on the roster. It’s littered with players who line up as full-backs or defensive midfielders on their club teams. Pin Chile in its own zone and challenge its ability to defend crosses and set pieces, and it is in trouble. But its high-flying, helter-skelter pressing style makes it extremely difficult to do that. Really, Chile simply outruns other teams. It streams forward in waves, with the world-class duo of Arturo Vidal and Alexis Sánchez creating for themselves and others. Chile may not be elite (although it may play like that some days), but it is never boring.

And so it is out with the old and in with the new. Spain’s controlled, possession-based brand of dominance is going home, unseated by the newly instituted but old-school counterattacking Dutch and the football anarchy of Chile. And, as with pretty much everything else in this World Cup, the viewers reap the benefits. On Monday, the Netherlands and Chile will meet to determine who gets to avoid (probably) Brazil in the Round of 16. With these two teams involved, whatever happens, it’ll certainly be fun.