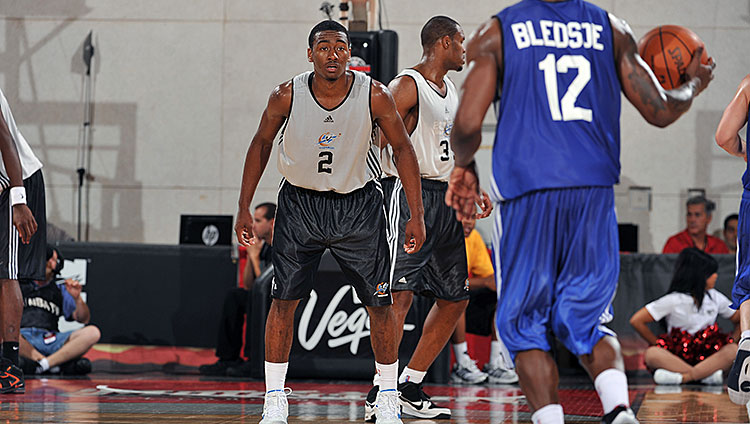 Take heralded rookies trying to plant their flags, the unheralded fringe players trying to grind out roster spots, second-year dudes who are too good for this, and random old-ass vets trying to squeeze one more contract out of their bodies before surrendering to the mercies of the Puerto Rican league, then gather them together in America’s two most morally polar-opposite vacation cities and make them play a raggedy variant of the game of basketball, and you have the NBA Summer League. What’s not to love?

Summer League is beautiful in its own disheveled way; like a 10-man free-jazz orchestra that occasionally stumbles upon tuneful moments of fatefully inspired weirdness, in between long passages of Chris Smith elbow-on-the-piano-keys dissonance. You will see things in a Summer League game that will likely never be seen again. Here are some of my favorite Summer League moments. 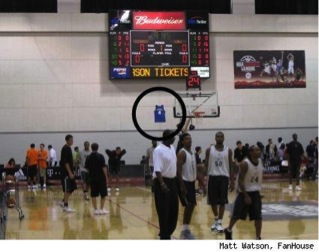 In 2007, 5-foot-9 Nate Robinson  averaged 19.6 points, six assists, and 3.6 rebounds a game, leading the Knicks to a 5-0 record. He was a glittering gem under the desert sun, a fragile seed from which hope could bloom. Nate was named the 2007 Summer League MVP. The Knicks would use that unbeaten Summer League record as a springboard to a 23-59 regular season that featured Stephon Marbury ominously threatening to air out GM and head coach Isiah Thomas’s metaphorical dirty drawers. By 2008, Nate Robinson was a three-year NBA veteran, a two-time Slam Dunk champion, a Summer League MVP, and, most importantly, an unprecedented four-time Summer League participant.

That kind of singular accomplishment demanded to be acknowledged, and so, during halftime of a Knicks-Timberwolves game, on July 20, 2008, it was. Nate Robinson’s Las Vegas Summer League jersey was hauled to the rafters. Or, more precisely, hauled to the soundproofing panels lining the upper wall of the gym, and affixed there, above a fire alarm, using what appears to be thumbtacks, in a solemn ceremony, the memory of which affects all who witnessed it to this very day. The jersey was later taken down by a maintenance guy.

2009: Anthony Randolph Puts It All Together!

Not too long ago, the long-limbed Randolph was an untamed, 19-year-old frazzle of dunks, fouls, rebounds, and blocks, an alien southpaw shooting guard in a genetically mutated power forward’s body.

The dude was a state of mind — a 6-foot-10 NBA nerd drug made of uncut upside, and Summer League 2009 was when it hit the streets. In four games, Randolph averaged 26.8 points on 60 percent shooting, 8.5 rebounds, 3 blocks, 2.2 steals, and 1.3 assists, punctuated by a Summer League record-tying 42-point acid trip into an alternate future against the Bulls.

Alas, Randolph World wasn’t to be. We’ve barely seen flashes of Randolph Parking Lot. Only 24 years old (!!!), Randolph was traded to the Bulls on draft night, his fifth team in seven seasons.

John Wall was the incoming no. 1 pick of the 2010 draft, the reigning SEC player of the year, the SEC tournament MVP, and a consensus first-team All-American. He had his own rap song and novelty dance. Jeremy Lin was an oddity, an undrafted Asian American point guard out of Harvard, just trying to catch on with a team.

Wall entered the game to a huge ovation, and the Wizards cruised through three quarters. In the fourth quarter, Lin was unshackled from the Mavs’ pine, and what followed was one of the great footnotes in basketball parenthetical history.

With 2:11 left in the game, the strange psychological phenomenon — part cultural projection, part the magic of sports — that would come to be known as “Linsanity” began to take hold. Lin brought the ball up, split a double team (LIN REQUIRED A DOUBLE TEAM), knifed to the basket, executed a 270-degree spin move, and launched a fallaway shot as the ref whistled an offensive foul. Chris Webber screamed, “Oh, no, ref, don’t you do that,” and the normally sedate afternoon crowd of scouts, bloggers, and basketball nerds very nearly rioted. My friend and Knicks blogger Seth Rosenthal insists that many in the crowd wept Linsane-inspired tears of joy at the conclusion of the game.

John Wall and Eric Bledsoe shared the backcourt for one season at Kentucky, with Wall running the show and Bledsoe mostly playing as an off-ball destroyer. Together, they were an overwhelming tidal wave of athleticism, but Wall, with the ball in his hands, had the gaudy stats and the obvious NBA role, while Bledsoe — 6-foot-1 with a 6-foot-7 wingspan — was a little harder to figure out. Bledsoe slipped to 18, after Kentucky teammates Wall, DeMarcus Cousins, and Patrick Patterson.

The 2010 Summer League was their first meeting as pros, and they wasted no time going at each other’s grills, with Wall hitting a floater on Bledsoe during the very first play of the game. Bledsoe responded, shedding Wall for a reverse layup. Later in the first quarter, Bledsoe soared in to try to swat away a Wall layup attempt, only for Wall to tumble to the court with Bledsoe’s sneaker landing on his neck. Wall finished with 18 points, 10 assists, and five steals. Bledsoe notched 17 points, four assists, and six rebounds.

2012: Adam Morrison From the Ashes

By 2012, Adam Morrison — the no. 3 pick in the 2006 draft, a college-gunning hesher par excellence with a ninth-grade dirtbag’s mustache — was an out-and-out flop as an NBA player. After appearing in only 39 games in two season (2008-10) with the Lakers, Morrison went to Europe to ply his trade in the Adriatic League. And that, it seemed, was that.

Morrison was a post-bust peculiarity when he was invited to join the Clippers’ 2012 Summer League team. What happened next is best summed up by the following Fall Out Boy lyrics:

Then I’ll raise you

Morrison would average 20 points and five rebounds on 55 percent shooting, including a 22-point quasi-revenge game against the Lakers and a 26-point, six-rebound, deep-shooting barrage on the last day of Summer League against the Celtics that drove the Las Vegas crowd to the edge of is-this-really-happening delirium, M-V-P chants raining down on the court. A Summer League M-V-P chant, but still.