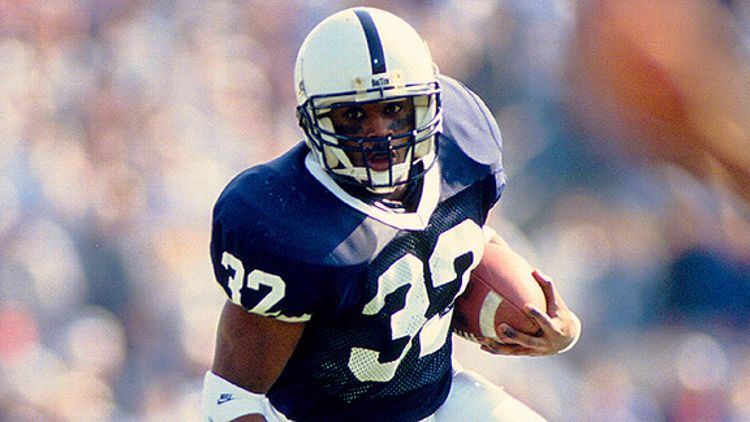 It’s true that Carter tore up his knee on the third carry of his first preseason game. And it’s true that Carter never became the NFL player that most people imagined he would. If we were graphing the ratio between expectation and disappointment, Carter would appear near the top. So would Blair Thomas, and yet in my mind, he is the running back who, in this video, launches into perhaps the greatest 92-yard run you will ever see. So would LaVar Arrington, who will hover indefinitely like a vampire bat above the entire Illinois offensive line. So would Courtney Brown, who will forever be devouring Big Ten quarterbacks with his wingspan.

It is an odd life, that of the college football fan. We are doomed to watch a considerable percentage of our heroes become failures. On Monday, the Buffalo Bills waived Aaron Maybin, the 11th pick in the first round of the 2009 NFL draft. Maybin was undersized for the the league, and maybe also underskilled for the NFL. He hardly played a down, and &#8212 even as the Jets prepare to offer him a second chance — it now seems likely that his career will take its place on that list of great Penn State draft busts. This doesn’t seem possible to me. In my mind, Maybin is still the pass rusher who blossomed out of nowhere in 2008 and simply couldn’t be blocked. I’m sure there are Ohio State fans who feel the same fondness for Vernon Gholston, and that there are Utah fans who remember Alex Smith not as one of the great retreads in NFL history, but as the hero of this game, and that there are hordes of cheeseheads in Madison who recall Ron Dayne not for his time as a failed Giant, but for his years as a Mack truck.

Odder still, of course, is when our failures become heroes. In the early 2000s, a linebacker/defensive end hybrid named Derek Wake completed an underachieving career at Penn State, got cut by the Giants, began referring to himself by his middle name of Cameron, starred in the Canadian Football League, and eventually became an All-Pro linebacker for the Miami Dolphins last season.

It doesn’t compute that Wake is an All-Pro and Maybin is a bust. It doesn’t make sense to the coaches and general managers who drafted them, and it doesn’t make sense to the scouts who are paid to make these decisions. If anyone told you in 2009 that they knew this would happen, they probably emerged from a wormhole in downtown Vancouver. Despite the warnings we’ve been given on every stock prospectus ever published, we would like to imagine that past performance is indicative of future results, but often it doesn’t mean anything at all. For that very reason, it would be nice if we could separate the two &#8212 if we could somehow split college and professional performance into LindeCuseian alternate realities.

In my mind, at least, it will always work this way. You can have your own vision of Ki-Jana Carter. Mine is nothing but sunshine and glory.

2. Texas A&M University, College Station, Texas
It seems peculiar to think that a school that has produced more presidential candidates than conference championships in the past decade could completely alter the landscape of college football. But if this is what it takes to implement a playoff, I will gladly volunteer to be tossed into the Fish Pond. (This list would also like to note, while afforded the opportunity: College Station, College Park, and State College are three distinct towns. Please do us the dignity of differentiating. I mean, would you call your fraternity a frat? And if you would, how can I secure a pledge?)

3. Brett Favre, quarterback
Because it’s been far too long since we heard about this guy.

4. Real People, television program, NBC, 1979-84.
The other day, I spent several hours wondering why no one had rehashed a program like this one and That’s Incredible! (to be fair, I was marooned in the LaGuardia Airport central terminal, which is essentially a gerbil maze with pretzel bites), until I realized that Tosh.0 is Real People with more irony and less Byron Allen.

5. Byron Allen, host, Comics Unleashed
Here is the simplest way to determine the time without a watch: If Byron Allen is on television, you should be asleep.