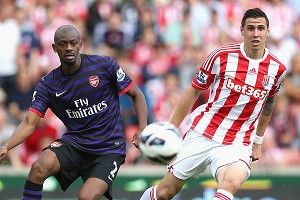 With the conclusion of the second week of Premier League activity, it’s more apparent than ever that this current campaign will contain the same infinite outcomes as an M.C. Escher construction. Luckily, Michael Davies and Roger Bennett dutifully gather to make sense of this Season of Weird. In this week’s pod, the Blazered Men consider the Belgian football renaissance, the emergence of Dodgy Keeping, and how someone might rid a Stoke City kit of its Drakkar Noir. But it’s not all foreign considerations; Michael and Roger also take time to pay tribute to the latest American to make his mark on the international scene. Introducing Geoff Cameron, Quarterback Style.

The Sport of Opportunity: A Night of Memories and Missed Chances at Arthur Ashe Stadium