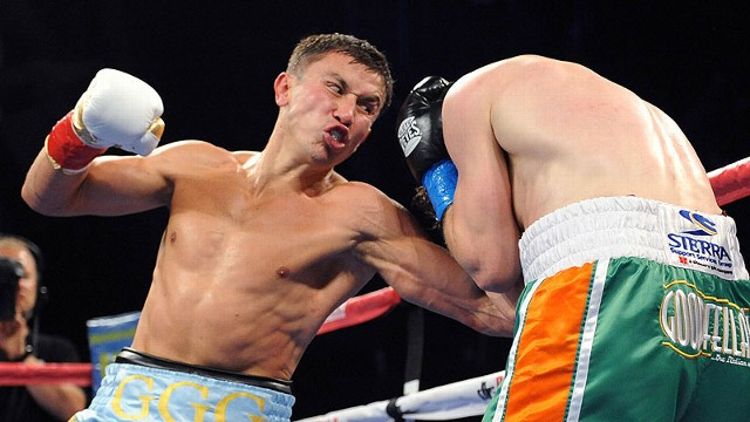 The first minute of Saturday’s middleweight title fight between champion Gennady Golovkin and challenger Matthew Macklin was uneventful. Macklin pushed his jab out, usually an inch or so short of Golovkin’s face, and Golovkin mostly kept his distance, springing forward at one point but holding back any punches when Macklin retreated. When Golovkin started to move his hands, he did so almost gingerly — a jab here, a left hook to keep Macklin from rushing in, a few more jabs. It was light work by boxing standards, just a champion feeling out his opponent. Then, a brief exchange in the corner: It was difficult to see from press row, but Golovkin sent a looping right down at a cornered, crouching Macklin, and it landed. When Macklin pivoted out of the corner and straightened out, he no longer looked the part of the confident, experienced challenger who was billed before the fight as the most dangerous opponent in Golovkin’s undefeated professional career. Now, Macklin’s hair was mussed down over his forehead, his lips were twisted in some frantic mixture of hurt and alarm, and the left side of his face was suddenly flush with a deep redness.

Golovkin was only getting started.

Why little-known middleweight champion Gennady Golovkin may be boxing’s next superstar, by Rafe Bartholomew

We Went There: Gennady Golovkin vs. Gabriel Rosado, by Rafe Bartholomew

Many fighters seem to respond to events in the ring with their own signature mannerisms. Floyd Mayweather snarls his lips and shakes his head at opponents to remind them that their efforts to hurt him are futile. Manny Pacquiao nods eagerly and bangs his gloves together after he takes a good shot. Adrien Broner spent much of his fight against Paulie Malignaggi last week shouting “You can’t hit me!” after using his gloves and elbows to pick off Malignaggi’s voluminous yet soft-as-veal-meatballs combination punching.

Golovkin tends to acknowledge things with a shrug — he flattens his lips, raises his eyebrows, and nods his head slightly to the side before getting back to work. Golovkin’s shrug is a catch-all. He performs it to give credit to his opponent, as he did when Macklin touched him with a jab late in the second round; he shrugs to show his disapproval, as he did when Macklin hit Golovkin on the break at the end of Round 1; and he shrugs when his work is done, as he did while describing his third-round body-punch knockout of Macklin to HBO’s Max Kellerman after the fight. Golovkin’s shrug is vague — you can interpret it however you want. When he did it after Macklin landed punches, was he admitting “OK, you got me!” or was he dismissively asking “Is that all you’ve got?” After Macklin rapped him with that illegal shot on the break, was Golovkin granting his opponent clemency or plotting violent revenge?

It seems fitting that Golovkin’s favored gesture is such a blank canvas, because the champion himself is still a cipher to American boxing fans. We don’t know much about him except that he’s from Kazakhstan, he won a silver medal in the 2004 Olympics, and he has knocked out 24 of his 27 professional opponents. And, oh yes, his favorite food is “MEAT.” In interviews, Golovkin’s English is shaky enough to be rendered basically meaningless, albeit in a charming, happy-go-lucky way. Thanks to some quirk of overly direct Russian-to-English translation, he kept calling former opponent Gabriel Rosado a “good boy” after leaving about a quart of Rosado’s blood smeared over the Madison Square Garden ring last January. On Saturday, he called the left hook that liquefied Macklin’s liver his “lucky punch,” which it most definitely was not. For American fans, there’s an ignorance-is-bliss appeal to far-flung destroyers like Golovkin. When a champion fighter hails from Brownsville, Brooklyn, or Sonora, Mexico, we can imagine where he came from and what he may have been forced to overcome in his lifetime. When the champ comes from a former Soviet republic in the Central Asian steppes, anything sounds plausible — he’s an awfully sweet and polite young professional fighter who happens to have once-in-a-generation, natural power in his fists; he’s descended from an infamously violent clan of nomad warriors; he’s the Soviet Weapon X.

Before Saturday, Macklin was expected to be the most significant test so far in Golovkin’s career. The England-based Irishman had performed well in losses to a pair of other middleweight champions, Sergio Martinez and Felix Sturm, although Macklin is widely considered to have been robbed of a decision against Sturm. We had seen Macklin against the best in the division, and how he fared against Golovkin would supposedly provide a measuring stick to gauge the Kazakh champion.

On Saturday, however, Macklin didn’t look like a new level of adversary for Golovkin. Instead, he resembled the rest of Golovkin’s recent conquests — he spent the fight in a state of near constant retreat, and then he was stopped. Golovkin’s knockout punching is the fearsome attribute fans and writers concentrate most on, but the way he stalks opponents is primal and terrifying in its own way. Once Macklin felt Golovkin’s power and began to retreat, he tried backpedaling, lateral slides, and sidesteps to survive the champion’s pressure. At every turn, Golovkin met Macklin and cut him off, forcing him back against the ropes. Nearly every time Macklin escaped from one corner of the ring, he found himself trapped in another corner, struggling to survive left hooks and looping rights cut through the air with a frightful WHOOSH whenever Macklin managed to duck under them.

For almost two and a half rounds Saturday, Macklin moved in lockstep with dread. Then it caught up with him, as he and Golovkin and nearly everyone else in the MGM Grand Theater at Foxwoods knew it would.

At the beginning of the third round, Macklin’s protective mouthpiece fell out, and there was a peculiar pause in the action. Macklin straightened up out of his fighting stance and looked for referee Eddie Cotton to call timeout and allow him to put another mouthpiece in. This could have been an honest slip or it could have been a “veteran move” by Macklin to buy a few extra seconds of rest, but when Cotton told the fighters to ignore the mouthpiece and continue the round, Macklin shot Cotton a look of full-on despair, as if he were envisioning losing half his purse for this fight to dental bills after catching a flush Golovkin right to the teeth.

The peril facing Macklin’s pearly whites got me wondering about the destructive power of Golovkin’s fists. How many shots would it take for him to punch through the wall in my living room? Could he pulverize cinder blocks or break down an old wooden couch frame faster than the Crovel Extreme II? This is foolish, but the strength of Golovkin’s blows is marvelous enough to inspire silly thoughts. What’s more relevant to boxing is the way that Golovkin rarely seems to load up on his shots or look for the knockout blow. He applies pressure and throws smooth, fluid punches. The damage accumulates, and bodies fall.

Unfortunately for Macklin, Everlast has yet to invent a protective rubber guard for one’s liver. I don’t think I’ve ever seen a person experience pain quite like Macklin did from the Golovkin left hook to the body that ended Saturday’s fight. Macklin was facing away from press row with his back to the ropes when the punch landed, so I didn’t see the death grimace that HBO’s cameras captured at the moment of impact, but he grabbed a rope and pulled his body up just enough to flash his contorted visage in my direction before collapsing again and writhing on his belly. He didn’t appear to be trying to beat the count, although as a professional fighter, I’m sure he wanted to get up. But his movement suggested no such purpose — it was pure, agonized flailing.

Since Macklin was considered a top-five middleweight before facing Golovkin, the post-fight gossip since Saturday has centered on whom HBO might be able to match with Golovkin next. And, this being boxing, the discussion has been pessimistic. It is, after all, a sport where a dangerous, rising star like Golovkin can struggle to land fights with elite competitors who see little reason to risk taking a loss and a beating to fight Golovkin when they can probably earn the same money against Matthew Macklin. Sergio Martinez, the lineal champion of the middleweight division and one of the world’s top pound-for-pound fighters, is 38 years old and recovering from knee and hand injuries. Martinez plans to retire in the next couple years, and he may wish to maximize his earnings in those last two fights by selecting two bigger-name opponents than Golovkin. Peter Quillin, another title holder at middleweight, is promoted by Golden Boy, and Golovkin fights on HBO, which refuses to do business with Golden Boy. The winner of an August middleweight title fight between Daniel Geale and Darren Barker might look for an easier foe than Golovkin. The same goes for British super middleweight Carl Froch, who can fight a lesser contender on U.K. television if HBO presses him to accept a bout with Golovkin. A super-middleweight fight between Golovkin and top pound-for-pound contender Andre Ward seems destined to happen, but not in the immediate future.

But you know what? For once, let’s ignore the business behind boxing. The intrigues and rumors and double-crosses between promoters and managers, boxers and trainers, advisers and networks — they’re all entertaining, but Golovkin is one of the handful of fighters in the sport who’s so compelling, so powerful, and just so damn good that he’s best enjoyed by shutting out all the noise and watching him go to work.