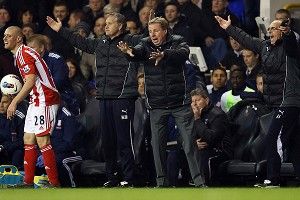 Everything I know about history I learned from Game of Thrones. And I know I am not alone. The HBO series is so painstakingly realistic; it runs like a Ken Burns documentary, except it’s interesting.

Those of us who love Soccer — America’s Sport of the Future Since 1972 — can only look with envy at the millions of fans the book series has garnered in the United States. I am among them. Finishing the five-book series certainly ranks as the greatest accomplishment of my life (marriage, witnessing Everton become league champions in 1986-87, becoming a father, and getting Dana Plato’s autograph off eBay round out the Top Five).

To celebrate the show’s return to HBO, and in a craven attempt to lull die-hard Tyrion Lannister aficionados from the geopolitics of Westeros to the goals, dives, and feigned injuries of top-quality soccer, we have worked with Men in Blazers listeners to construct this GAME OF THRONES–to–ENGLISH PREMIER LEAGUE converter based on the characters we will meet in Season 2. (Mild, obtuse spoiler alert.)


MANCHESTER UNITED: HOUSE BOLTON OF THE DREADFORT
The most powerful house in the North. Sinister, ruthless, and brutal, their motto is “Our Blades Are Sharp,” and they will do whatever it takes to win. Sir Alex Ferguson is the cold, calculating Roose Bolton, a leech lover, known to flay those who dare confront him. Wayne Rooney is the ugly Ramsay Bolton, his legitimated bastard son, a creature who delights in violently torturing those around him.

MANCHESTER CITY: THE GOLDEN COMPANY
A legendary force of sellswords, feared as the largest and most expensive mercenary army in the Free Cities. Consisting of infantry, horses, and a number of elephants, their words are their war cry: “Beneath the gold, the bitter steel.”

ARSENAL: HOUSE BARATHEON
Not so long ago, they were the Royal House, before being undone by a combination of personnel departures (Renly/Fábregas), long-term injuries, and being gored to death by boars (Jack Wilshere/Robert). The stubborn Arsene Wenger is Stannis — a humorless, brooding man of principle who might dabble in the dark arts to regain the Iron Throne.

TOTTENHAM: HOUSE TYRELL OF HIGHGARDEN
The self-styled Warden of the South committed to chivalry and style. Its motto is “Growing Strong.” Tottenham’s leader, Harry Redknapp, is Mace Tyrell, an ungainly man who lacks the wits to succeed at the Game of Thrones. Scottie Parker is Loras Tyrell, the boyishly handsome Knight of the Flowers, who is gifted with a mix of battlefield technique and courteous charisma. Gareth Bale is cunning Margaery Tyrell.

CHELSEA: HOUSE LANNISTER
A team whose grip on power is fueled by riches. The de facto ruler, Chelsea owner Roman Abramovich, is Tywin Lannister, a controlling man who always pays his debts but rarely appears happier than when skinning recently slaughtered deer.

Fat Frank Lampard is Varys, the eunuch Master of Whisperers. John Terry is Jaime Lannister, a warrior with an unusual sense of what passes for an appropriate sexual partner. Juan Mata is Tyrion, the lovable dwarf. I would like to believe Lady Physio is Sansa — a hostage only there at pain of death.

NEWCASTLE: HOUSE ARRYN
A regional power located around the impregnable St. James Park, akin to The Eerie, that unassailable castle high in the mountains. The tradition-soaked club runs on its lore. Their infatuated fans love their team even more than they love their horns of ale. Most long to dispatch impolitic owner Mike Ashley via the Moon Door. Make the bad man fly!

LIVERPOOL: HOUSE STARK
An ancient and glorious Northern house led by a proud and stubborn king. Kenny Dalglish is 100 percent Ned Stark — a leader comfortable as a warrior, but not a politician. He may well lose his head because of it. Luis Suarez is Theon Greyjoy, a simmering hostage with a cocky smile and arrogant attitude. Andy Carroll is Hodor, a large simpleton, slow of wits, but good at carrying stuff. Anfield is Winterfell, a crumbling seat of power home to legions of loyal denizens and legendary symbols.

SUNDERLAND: WHITE WALKERS (THE OTHERS)
“Descending in the darkness on their dead horse, hunting with packs of pale spiders as big as hounds.” Phil Bardsley, Wes Brown, David Vaughn, and John O’Shea can only be destroyed with fire. Few human beings look part First Men, part Children of the Forest more than Lee Cattermole.

EVERTON: THE NIGHT’S WATCH
Their rich history may date back to the Age of Heroes, but with resources now low on the ground, the present-day band are a shabby bunch of misfits with suspect backgrounds. Only a collective commitment to be “the sword in the darkness, the watcher on the walls,” ensures that even the most powerful foes can be routed. Lack of sexual activity is admittedly a team-wide problem. David Moyes is the Old Bear, Leighton Baines the dashing Jon Snow, and Marouane Fellaini is Qhorin Halfhand.

SWANSEA: DIREWOLVES
White-furred creatures that thrive and hunt in a pack. Had not been sighted South of the Wall or in the English Premier League for nearly 200 years. Readers of the fantasy series will appreciate the team’s self-evident yet criminally under-reported secret: Manager Brendan Rodgers is clearly a Warg who utilizes the powers of a skinchanger to influence his team’s seamless interplay.

NORWICH: THE CRANNOGMEN
A primitive, swamp-dwelling people who lie in the marshes, relying on guerrilla warfare and the use of poisons to repel more powerful invaders. Midfield smurf Wesley Hoolahan is a greenseer like Jojen Reed.

STOKE: HOUSE GREYJOY
A brutal yet proudly primitive people, who worship the Drowned God. They rule the Iron Islands around Pyke, a formidable fortress akin to the cauldron that is the Britannia Stadium. Tony Pulis is Euron the Crow’s Eye, a man hated by his brothers for his skills as both a warrior and a manipulator. Ryan Shawcross is Cragorn. Robert Huth, Dean Whithead, and Glenn Whelan are living proof that “what is dead can never die, but rises again, harder and stronger.”

FULHAM: HOUSE HIGHTOWER OF OLDTOWN
The oldest city in the kingdom famed for the beautiful Citadel, akin to Craven Cottage — the training school for maesters, the doctors, councilors, and scientists who are all skilled and supremely gifted (Clint Dempsey, Bryan Ruiz) yet rarely powerful.

WEST BROM: THE STONE CROWS
A hairy hill clan led by Shagga. They have weapons — Peter Odemwingie and Shane Long — and abundant spirit, but are simply outgunned militarily by those who surround them.

ASTON VILLA: THE FREYS
A noble house populated by a weaselly people whose only asset is their central location. Bitter and constantly suspicious of perceived marginalization, cantankerous President Emeritus Doug Ellis is Walder Frey. Emile Heskey is, of course, Fat Walda.

BLACKBURN: CRASTER’S KEEP
A fortified homestead North of the Wall populated by the sordid Craster and his 19 wives/daughters/mothers of his children. Few understand exactly what is going on there. It is, honestly, better not to know.

BOLTON: HOUSE MORMONT
An old, proud, yet poor house, so shorn of resources, even their women learn to fight. Their greatest asset, Longclaw, a mighty sword of Valyrian Steel, a.k.a. Gary Cahill, has recently been lost.

QUEENS PARK RANGERS: HOUSE MARTELL
Angry and mysterious, this ill-disciplined southern people have a tendency to strike first and think later. Their hot-blooded temperament (see: Cissé, Djibril, Barton, Joey and Diakité, Samba) has caused them to become isolated and could possibly lead to self-destruction.

WIGAN: BRIENNE OF TARTH
Honest, loyal, naive, yet overwhelmingly ugly. Driven by a longing to be accepted as a knight (read: respected English Premier League team) by her peers. Her ability to rebound from terrible physical punishment (losing 5-0 to Manchester United) means she should never be written off.

WOLVERHAMPTON: HOUSE TULLY
A venerable, noble House located in the Midlands whose glory lies in the past. Manager Terry Connor is Edmure Tully, a man so militarily incompetent, the shameful threat of being stripped of their lands looms large.

… and meanwhile, in the Kingdom Across the Narrow Sea …

LEEDS UNITED: HOUSE TARGARYEN
Once feared and imperious. Now suffering the agony of wandering exile, fueled by visions of return, revenge, and the reclamation of their throne.

Roger Bennett and Michael Davies host Men in Blazers live on SiriusXM Ch. 92/207, Mondays and Fridays at 9 a.m. EST. Follow the show on Twitter, Tumblr, and Facebook, and sign up for the GFOP newsletter.