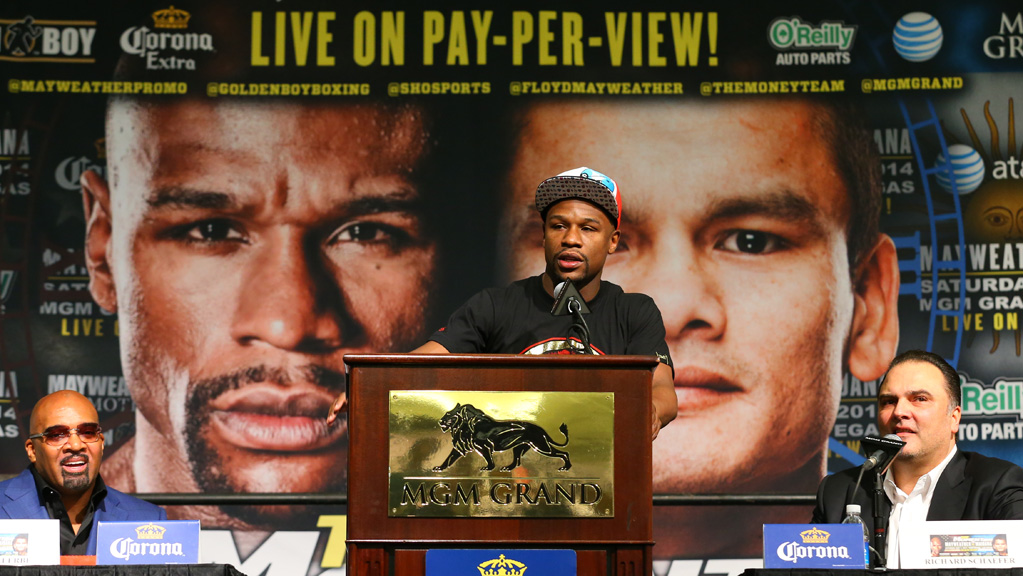 Almost exactly two years ago, Grantland introduced the boxing Relevance Rankings, an attempt to combine pound-for-pound talent with marketability to rank fighters according to their overall clout in the fight game. The Relevance Reports are a way to breathe life into that mothballed one-shot franchise, a semi-regular grouping of a handful of fighters who fit within a certain category. The first installment will consider possible future opponents for Floyd Mayweather Jr. (To see the current Relevance Rankings in boxing, scroll to the bottom of the page.)

The most basic rule of poker tells is that weak means strong and strong means weak. The same interpretations apply to the way Floyd Mayweather talks about his competition. If he denigrates a fighter, it typically means he views that opponent as a threat. In some cases, it might mean Mayweather has no intention of ever facing him. If he praises a fellow boxer and labels him dangerous, it means he’s trying his best to sell the public on someone he expects to defeat easily.

It’s worth noting that rarely has Mayweather been more effusive in his praise of an opponent than he has been for Marcos Maidana for the past two months. And guess what? Mayweather will enter the ring against Maidana on Saturday in Las Vegas as an 11-1 favorite.

Mayweather wants you to believe Maidana’s chances are much better than that so you’ll purchase the pay-per-view. Sure, there’s always the possibility that Maidana will land the perfect punch and shake up the boxing world — as he did on a smaller scale against Mayweather wannabe Adrien Broner in December — but if we’re being honest, 11-1 looks about right.

The fun of following Mayweather comes not from watching him fight — what he does in the ring is admirable, effective, at times awe-inspiring, but almost never “fun” — but from talking about whom we’d like him to fight. The current buzz is that Amir Khan, should he defeat Luis Collazo on the Mayweather-Maidana undercard, will again become the front-runner to face Mayweather next. (Many boxing insiders expected Khan to get the May 3 date against Mayweather, but Maidana’s performance against Broner made Maidana the more attractive and deserving opponent for Saturday’s bout.) But fans didn’t want Khan-Mayweather this time around, and they probably won’t want it in the fall. Certainly, there are more deserving, more threatening opponents available for Mayweather.

So as Grantland revives the Relevance Report, we start with the top five future opponents for Mayweather who would be better than Khan (and arguably better than Maidana, in many cases). One note: We won’t let business-side entanglements, such as promotional and network conflicts, stand in the way of our selections. We will, however, draw the line at fights that are physically impossible. That’s why, even though there has been some recent chatter about a clash between Mayweather and Bernard Hopkins, you won’t find the 49-year-old B-Hop listed below. He fights at 175 pounds. Mayweather competes at 147. Hopkins says he can get down to 160 for the fight. We’re calling bullshit on that. Sure, it’s a fascinating fight, but it’s pure fantasy. Here we go with five more realistic opponents:

You can start with the simplest argument: Why give Khan the Mayweather fight when Garcia knocked Khan out? And why give Khan the Mayweather fight when Garcia has since gone on to defeat four opponents who are all superior to the two Khan has beaten in the same time frame? Garcia is the undefeated lineal champion at junior welterweight, and two fights ago he gained essential exposure by upsetting Lucas Matthysse in the co-feature to the highest-grossing pay-per-view event ever, Mayweather vs. Canelo Alvarez. Nobody would pick Garcia to beat Mayweather. But it’s vaguely comforting to know that almost nobody picked him to beat Khan or Matthysse either. Garcia doesn’t floor you with otherworldly talent, but he just keeps winning. 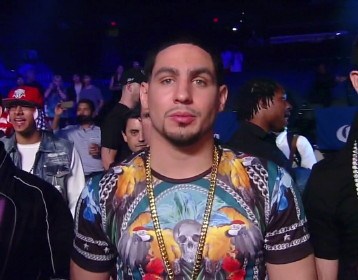 Until about five months ago, the most interesting Porter talking point was that he was sponsored by a beanbag chair manufacturer called Ultimate Sack. Then the unbeaten 26-year-old elevated his unique brand of high-intensity, high-athleticism mauling to upset Devon Alexander last December and concuss Paulie Malignaggi this April, and all of a sudden … well, the Ultimate Sack thing was still the most interesting talking point. But at least it had some competition.

A fearless, smothering pressure fighter with spring in his young legs is just the sort of stylistic package that can make an aging, superior technician finally look old. Think Ricky Hatton against Kostya Tszyu, or Rocky Marciano against Jersey Joe Walcott, or Aaron Pryor against Alexis Arguello. Porter overwhelming a 37-year-old Mayweather is not an unrealistic scenario.

After Thurman convinced Julio Diaz to quit with a rib injury in just three rounds Saturday night, Showtime’s Jim Gray asked him, “You’ve put yourself now in the Mayweather sweepstakes. Is that what you are shooting for and looking toward?” Thurman responded, “Everybody in the welterweight division is shooting for that Mayweather sweepstakes.” Among those in the division with the correct connections (Showtime, Golden Boy Promotions), Thurman has now separated himself as the most dangerous possible sweepstakes winner.

When he isn’t telling San Antonio to stay classy, Thurman can presumably be found at home rolling 12-sided dice and finishing up his Harry Potter fanfic. But whatever comic-book convention stereotypes his ponytail and thin goatee may conjure, Thurman, at 23-0 with 21 KOs, punches with a combination of power and speed nobody else in the Golden Boy stable can match. His footwork is coming along, his confidence is rising, and his marketability is aided by the potential for a few confused Keith Urban fans to shell out $69.95 on pay-per-view before realizing their mistake. While the ideal scenario for fight fans is Thurman vs. Porter and the winner gets Mayweather, the reality is that either rising force is already a far better choice than Khan.

Mayweather wants to make history by retiring undefeated with more wins than Marciano (he’s currently five from that goal). But should he choose to pursue the sort of history that would dramatically elevate his ranking among the all-time greats, his best option is to challenge for the lineal middleweight championship of the world. No true lightweight champion has ever risen to the true middleweight title (we’re talking legitimate claimants, not fighters who held fractional alphabet titles). Henry Armstrong didn’t quite do it. Roberto Duran didn’t quite do it. Floyd Mayweather has an opportunity to be the first.

It might become easier for him — from both an inside-the-ring and an outside-the-ring perspective — if promotional/network free agent Miguel Cotto defeats Martinez on June 7. But Martinez is the favorite, and no matter what anybody tells you about his loyalty to HBO, if the almost 40-year-old “Maravilla” is offered a Mayweather fight, he won’t turn it down. The question is whether Mayweather will offer it. Martinez has been breaking down physically for the last two years. If he beats Cotto but struggles sufficiently in doing so, perhaps Mayweather will sign off on the risk-reward math. And if Mayweather-Maidana underperforms on pay-per-view and Showtime would like another Canelo-size bonanza to make up for it in the fall, the middleweight champ is its best option. 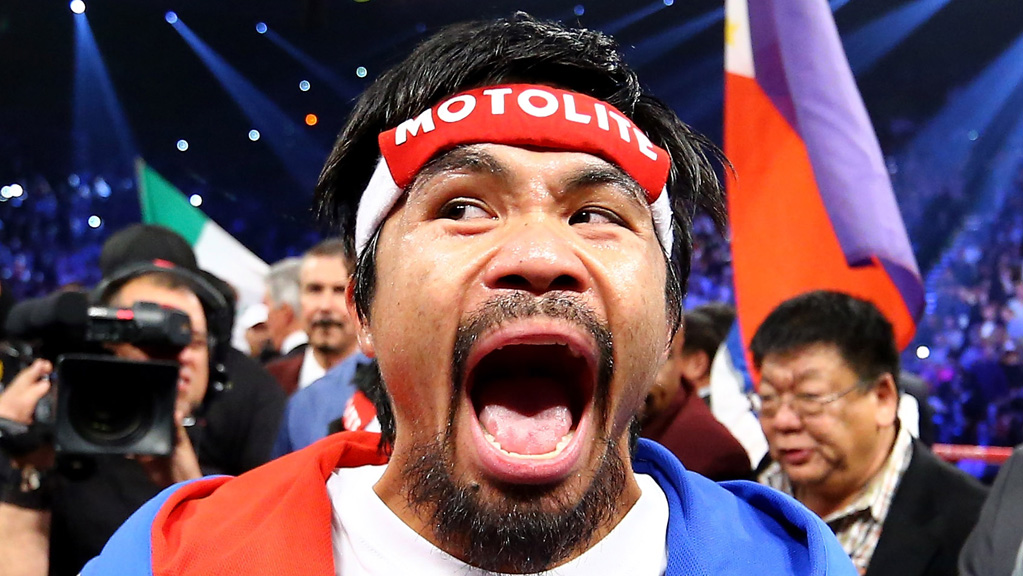 Every time I meet new people and tell them I write about boxing, they invariably lead with my least favorite question: “Do you think Mayweather and Pacquiao are going to fight?”

The answer is no, I don’t think they’re ever going to fight. And the window for when they could have fought and the public would have been evenly divided on whom to favor has long since slammed shut. But even now, four years and counting after when it should have happened, Pacquiao is still the most lucrative opponent for Mayweather and, at least among fighters at 154 pounds or below, quite possibly the one with the best chance of handing him a defeat.

Unfortunately, Mayweather takes every possible opportunity to belittle Pacquiao’s accomplishments and write him off as easy pickings. And that tells us everything we need to know about how Floyd really feels.