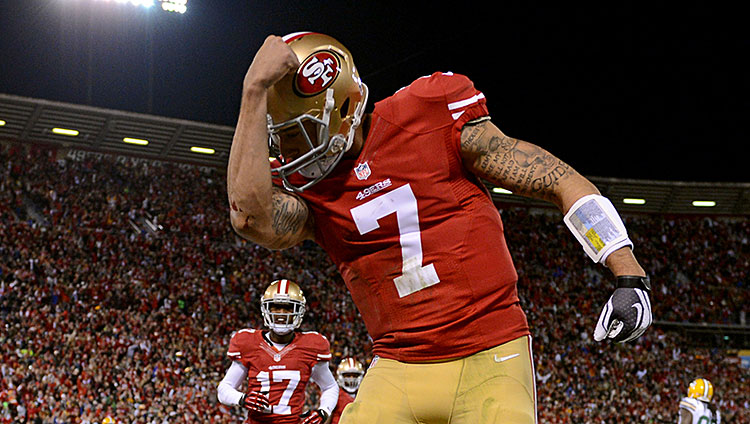 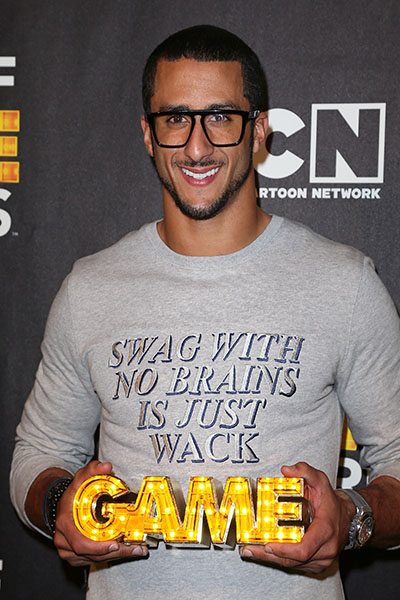 2. OK, everybody slow down.

Claims that sports fans are smarter today than ever before are mostly right. When NFL contracts are announced, not a single informed person pays attention to that big number at the front. They know all that matters is the second figure, that guaranteed clump that actually lays out how much a team has on the line and for how long. When Colin Kaepernick’s guaranteed figure was announced as $61 million, people (including me) reasonably lost their minds. It was a record — more than Matt Ryan, more than Peyton Manning, more than Aaron Rodgers. We know the game now, with Joe Flacco and Jay Cutler and everyone else raking in deals that could be worth at least $100 million, but Kaepernick getting more guaranteed money than Rodgers, who signed his deal coming off an MVP year and before his 30th birthday, seemed insane.

As the details have trickled out, we know it’s a bit more complicated. Last night, Pro Football Talk reported that only $13.073 million of the deal is guaranteed at signing. Kaepernick’s signing bonus was significantly smaller than several of those other quarterbacks had in their monster deals, and it’s because the structure is quite a bit different. According to PFT, the guarantees in his deal switch from injury-only to fully guaranteed on April 1 of each year.

That essentially means the Niners have the choice to move on from Kaepernick before the start of each season. You can see why the front office was reportedly ecstatic about the deal. If Kaepernick turns into the superstar they hope he can be, they’re paying market value for a top-tier quarterback and won’t mind footing the bill. If he doesn’t, they can move on whenever they want. It’s sort of similar to the situation Tampa Bay had with Darrelle Revis last year; the flexibility in that deal made it universally lauded. San Francisco has been making smart moves since Trent Baalke and Jim Harbaugh showed up. This seems like another one.

That structure obviously alters the opinion a lot of people initially had about the deal. Kaepernick’s numbers last year were all over the place. He completed only 58.4 percent of his passes and threw for only 3,197 yards, but the raw throwing totals, considering his other skills and San Francisco’s offense, are never going to be the best measure for Kaepernick. No one threw less often than the 49ers did a year ago, and his stable of weapons was never at full strength.

Kaepernick’s numbers with and without Vernon Davis were jarring, and that’s partly because Davis was one of the only two reliable targets Kaepernick had all year. Anquan Boldin was amazing in his age 33 season, but there’s a reason the Ravens were willing to turn him over for next to nothing. Boldin was never dynamic, and now, he’s really just a steady outlet. Kaepernick made the most of Harbaugh’s choices to throw to last year (the Niners actually finished fourth in passing DVOA, a nod to their feel for situation and the sure-handedness of the guys Kaepernick trusted most), but there were other times when Kaepernick looked lost. There’s no denying that to justify San Francisco’s faith in him through the length of the deal, he has a lot of developing to do as a passer.

The encouraging part for the Niners is that isn’t out of the question. Just two quarterbacks have a higher QBR since Kaepernick made his first start: Rodgers and Manning. (Kaepernick only started 23 games in the regular season, by the way.) Wins are a dicey stat, but there’s no denying he’s racked them up, including in the playoffs; no quarterback has a higher playoff QBR since 2006 than Kaepernick, according to ESPN Stats & Info.

There are counters to all of that. By the eye test, Kaepernick clearly regressed as a passer last year. His completion percentage in the pocket was a full five percentage points lower; his yards per attempt dropped from 8.6 to 7.8. And his performance in the pocket wasn’t all about what he did while in it; it extended to how quickly, and unnecessarily, he bailed out of it at times.

Doubters will point to problems like those. They’ll say that Alex Smith went 13-3 with this team, that eventually getting a return on $100 million worth of quarterback play — with this style, this running game, and this defense — would be impossible.

The believers, they’ll point back to that first playoff game against Green Bay. Being a high-level quarterback isn’t solely about completion percentages and TD:INT ratio anymore. Dynamism matters, and what Kaepernick did that night is something maybe only Robert Griffin can replicate. On a year-to-year basis, his talent is worth every bit of the risk.

And that doesn’t even take into account everything Baalke and Harbaugh have done this offseason to help him on offense. If the Niners can get lucky with health, their receiving corps has a chance to be one of the best in the league. Crabtree, who transforms with Kaepernick under center, will be back for the whole season; Boldin seems ageless. Davis is one of the most valuable options for any quarterback in the league. Stevie Johnson, who the Niners traded for after the first round of the draft, is every wide receiver nerd’s favorite player (well, him and Antonio Brown). If Johnson’s close to 100 percent, few players in the league are better at beating press coverage and creating space for his quarterback, something the rest of San Francisco’s receivers struggled with a year ago. Add all that to a top-five offensive line and running game, and Kaepernick should have a chance to prove he’s worth it.

Supposedly, one of Kaepernick’s major concerns during yesterday’s negotiations was how his deal would affect San Francisco’s ability to sign its other impending free agents (Crabtree was apparently mentioned by name).

The Niners are oft mentioned alongside Seattle as a team so well constructed that their window should last for a while. As the Seahawks might soon find out after handing out enough cash to fill Puget Sound, those windows are quicker to close after stars get paid.

This year, the Niners’ roster looks like a team that’s drafted and developed as well as any team in the league. Their best players are all home-grown; the highest cap figure on the team belongs to a very good, highly drafted player in the second year of a relatively friendly contract (Anthony Davis). Kaepernick will be able to make good on his offer to create room for teammates in need of an extension — at least this year.

Next season, things get more complicated. Aldon Smith gets a huge bump in the final year of his rookie deal (and he’ll be looking for a new one). Crabtree is a free agent this spring. So is Mike Iupati, who’d likely be looking for a deal near the top of the guard market. Kaepernick’s base salary next year jumps to more than $12 million, and with that will come some decisions for Baalke and Harbaugh. If there’s a downside to developing a roster flush with great players, it’s that eventually, the bills on those players come due. The Niners can’t keep them all.

5. The price of commitment

The first thought I had when hearing the Kaepernick news was along those same lines. Initially, two people came to mind, neither of whom was Kaepernick.

Russell Wilson was the first. I can only imagine what he and his agents thought after seeing the initial number. If Kaepernick was worth $61 million guaranteed, Wilson had leverage in just about every area to demand more. The quarterback arms race would continue, and the gap between the haves and have-nots would widen even further.

That gap is what made Andy Dalton the second person to come to mind. Dalton’s contract expires at the end of the season. Based on the current landscape of quarterback deals, the one that existed before yesterday, the Bengals had two options. If Dalton had a good year, they could give him the Flacco/Cutler/Romo treatment, likely for a slightly smaller price tag, but probably not small enough.

Right now, the quarterback middle class is a barren wasteland. There are the $100 million men (or close to it) and the quarterbacks on their rookie contracts. Nothing in between exists. That makes the ongoing negations for Alex Smith difficult. He’s perfectly adequate, but where does that fall?

The structure of the Kaepernick deal might provide a template for Cincinnati, should it choose to use it. If Dalton shows some improvement this year, maybe it brings him back on what amounts to a year-to-year basis, banking on his familiarity with his weapons and the offense. If he doesn’t, it cuts him loose.

Dalton’s contract isn’t what caught my interest, though. What did is the prospect of the Bengals resetting after just four seasons.

If you asked anyone associated with the NFL what the most important piece in winning a championship would be, I’d guess a lot of them would say a franchise quarterback. Finding that player remains the key that unlocks the case holding that Lombardi Trophy. The issue, it seems, is what happens after he hoists that trophy.

Look at the past decade of Super Bowl winners. Last year, Seattle won with Wilson famously making half a million dollars all year. The year before, the Ravens won the title in the final season before Flacco’s massive payday. In the past 10 years, only three teams not boasting Tom Brady or Peyton Manning (both of whom break pretty much every argument) have won a Super Bowl after their quarterback has gotten his extension. Only Ben Roethlisberer and Eli Manning, the two who’d already won Super Bowls on their rookie deals, were making more than $10 million per year.

I’m not saying the Seahawks should let Wilson walk. There’s no way they could. Letting championship-caliber quarterbacks out the door just doesn’t happen. The question is whether that thinking will hold true as we move forward. At some point, it might be smarter to roll the dice on a dirt-cheap option every three years and hope you hit, allowing teams to fill out the rest of their roster in the same way the Seahawks did this year. Then again, it might never be. What I do know is the Niners don’t have that option anymore. They’ve made their choice, and for as long as this championship window exists, they’ll be left with it.

Five Things You Need to Know About Tonight’s MLB Draft