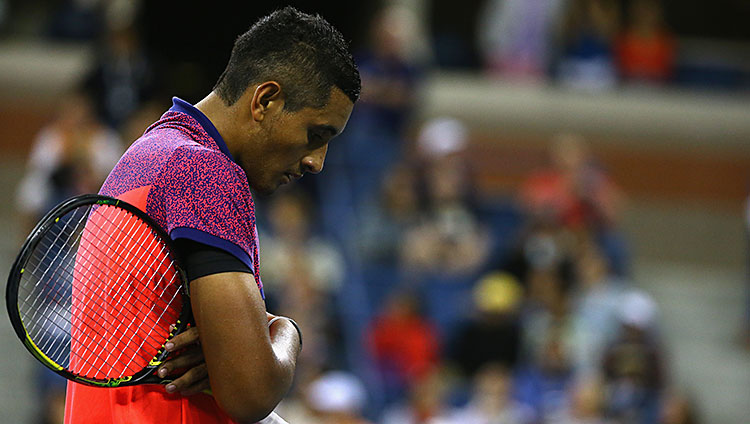 Nick Kyrgios plays tennis like someone who knows he is made of fire. He knows it so completely, is so certain of it even when other people aren’t, that he is willing to burn himself alive every now and again to make the point.

When things are going well, he rushes between points, stalking the baseline, fidgeting, bobbing in place; impatience radiates out of him like lightning bolts from a cartoon radio tower. Kyrgios is a 19-year-old from Canberra, Australia, and watching him at these moments gives you the sense of a child being driven across a big country, dying to get out and run. Are we there yet? Watch the video of his stunning upset of Rafa Nadal in the fourth round of this year’s Wimbledon.

He hunches over his serve, heavy shoulders curving down over his lanky body, seized by a kind of frantic focus. He bounces the ball once, twice, three times. Then he flings it up — Kyrgios does nothing as measured as tossing — whips his racket back, and snaps into the shot with total ferocity. As soon as the point is on, he looks strangely relieved. He’s back in his proper element. You don’t see the youngest player in the draw, a 144th-ranked wild card, taking on a 14-time major champion. You see someone who, for as long as he’s playing tennis, knows how to breathe again.

When things are not going well, Kyrgios loses control almost immediately. He slams his racket to the ground. He whacks himself in the head with it. He gestures melodramatically to the spot on the court where his opponent’s winner landed, looking like an opera singer in the throes of a particularly brutal death scene. Perfidious earth, how dost thou wrong me thus? He basks in his own frustration. He yells toward his player’s box — not once or twice, but over and over again, after every point. In his first-round match against Mikhail Youzhny at the U.S. Open last week, he amassed three code violations — for profanity, for launching a ball into the stands in anger — which is one short of an automatic disqualification. And that was in a match he won. In his 3-6, 6-3, 7-6 (4), 6-3 third-round loss against Tommy Robredo, Kyrgios challenged what was obviously a good call. Then he crumpled to the court while he waited to be proved wrong.

One way to describe Kyrgios at this early point in his career is to say that he fights himself as much as his opponent. Another, to my mind more accurate, way is to say that he is a force of nature, a wild, thrilling talent who has yet to be dammed or tamed or harnessed. His milieu is the spectacular shot, the failing, between-the-legs winner, the forehand that singes the air. (His forehand is one of the biggest and best on tour.) Even when he’s going to pieces, he traffics in the spectacular. He tries shots he has no business even thinking of. He tries audacious cross-court lobs that look silly when they miss and make you stand up openmouthed when they don’t. At the moment, he lacks the discipline to contend regularly against the top players. There is no question about this. But I am not writing about a player who lost at the U.S. Open three days ago because he needs more grown-ups to tut about playing within his limits. I’m writing about him because I was in Arthur Ashe Stadium when he lost to Robredo on Saturday night, and seeing him not play within his limits was so impossibly fun that it’s overshadowed everything I’ve watched since.

Here’s something he tweeted the night before the Robredo match, just incidentally:

$1000 dollar dinner with the man Marinko. That sneaked up on us. #greek #feastforthesenses #gobigorgohome

Here’s something his mom tweeted from back in Canberra after his second-round win:

Keep this in mind: Kyrgios is 19. A year ago, he won the Australian Open … boys’ division. He is halfway between #gobigorgohome and “well done little fella.” He’s listening to Wiz Khalifa and fantasizing about taking down Novak Djokovic. He’s not finished yet. He’s not supposed to be.

There’s a scene in the 1961 movie The Hustler in which Paul Newman, as a wild and talented young pool player called Fast Eddie Felson, gets his first chance to play against the legendary Minnesota Fats. They’re evenly matched. The games last through the night. At a certain point, Fats, who’s portrayed by Jackie Gleason, goes into the bathroom and puts himself back together — washes his face, reknots his tie, combs his hair. Fast Eddie stays out in the bar, cracking jokes and throwing down shots. Eventually, Eddie runs out of steam. Fats prevails. The point is that Fast Eddie needs to learn to pace himself, and eventually he does; when he meets Fats again, things go differently. What’s happened in the meantime is that Eddie has suffered. He’s grown up.

Against the calm, clearheaded veteran Robredo, Kyrgios sometimes looked like he was out there throwing down bourbon shots. He didn’t look grown up. Well, maybe one day the sports psychologists will get hold of him, teach him to self-regulate. Maybe he’ll live up to his potential and win a handful of majors. But I don’t know. It’s that first scene against Fats that stays with you from The Hustler. It’s the image of talent in its most raw, most unapologetic state. If you think winning is everything in sports, you may find that hard to celebrate. But it’s a joy to watch. It’s a joy even when it loses. It’s a joy even when it burns itself up.