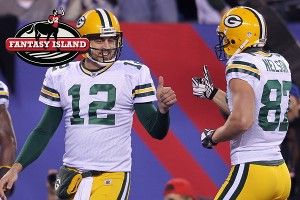 A thought experiment, on the occasion of Panthers GM Marty Hurney’s Monday-morning firing: If millions of devotees followed your fantasy football team with the passion of NFL fans, and this team started the season 1-5 primarily because you used (wasted?) a first-round selection on Cam Newton, would you be out of a job? Newton’s fantasy points are that of a backup QB (13th overall), and the former no. 1 pick is regressing while contemporaries — Andy Dalton, Christian Ponder, Andrew Luck, RG3, to name a few — improve. Perhaps he’s just suffering from an especially lethal sophomore slump, but this is very concerning. As such, I expect a pick-six or two from the ferocious Bears defense, the 11th highest-scoring entity in all of fantasy football.

Detroit is one of those indie hype bands that seemed exciting when they released bedroom recordings posted alongside scanned Polaroids. But when the album drops in the fall you realize they have a one-dimensional sound (306 passing yards per game, second in the league). It falls apart as they hit the tastemaker circuit, and blog hype is undone because they actually suck live. Detroit Lions even sounds like a collective of skinny jeans with pork chop sideburns, singing poorly and behind reverb, fueled by a sense of knowingly cheeky masculinity. The Seahawks know they can’t pass, so they’ll be killing clock and dominating possessions behind Marshawn Lynch. They are top-10 against the run and pass — expect drives that end abruptly and go nowhere. In terms of post-Burleson deep cuts, I like Oklahoma rookie Ryan Broyles more than perennial underachiever Titus Young.

Cleveland has been functional at home — boasting a 1-2 record and playing opponents close. My guess is that Trent Richardson will suit up, but the rib injury will severely limit his touches (he won’t have any contact until game time). Montario Hardesty is in line for 15 carries and more should he yield initial returns. He won’t: The San Diego Chargers allow only 71 rushing yards a game. How much does Philip Rivers miss Vincent Jackson and those stolen-glance-laden IHOP dinners during which Rivers felt like they could talk about anything? He’s only completed two passes longer than 31 yards this fall and has thrown five interceptions in his last two games.

After seven mediocre games that have caused many to question the state of the Brady-Belichick dynasty, this matchup seems fitting; an opportunity for the Patriots to revitalize their season against the team they beat in Super Bowl XXXVI to launch their run of post-millennial dominance. A lucrative fantasy day for everyone with a flying Elvis-emblazoned helmet is in store. This means: two to three forceful end zone spikes from Gronk, 100-plus rushing yards from Stevan Ridley, umpteen extra points from Stephen Gostkowski, and a postgame excursion to a London tattoo parlor for a self-satisfied Aaron Hernandez.

Sometime between Mark Sanchez’s interception and game-sealing fumble in New England, I came to an important realization: I wanted Sanchez to stage a semi-respectable comeback, providing Jets Nation a glimmer of hope, yet ultimately fall short. I admit that I should not be mentally poking a Fireman Ed voodoo doll, especially as a long-suffering Browns fan. But my Twitter feed is utterly captivating whenever Sanchez is on the field, and insta-viewing the emotional fluctuations of Jets fans re Good Mark/Bad Mark is simply too entertaining to pass up. Let’s stay living in a world where the Sanchize is forever stretching the bounds of mediocrity, Tim Tebow is a second-string hope obstructed by Sanchez’s rare moments of greatness, and New Yorkers furiously tweet their angst.

In bad news for owners of any Falcons, this is the first week the Eagles’ defense won’t be coordinated by an offensive line coach. I don’t except huge days from Matt Ryan or his guys outside, and this will be one of those games that Atlanta’s lack of a no. 3 receiver shows. Jeremy Maclin’s game against Detroit is tough to sustain, but it’s a more likely outlook than the continuation of his slow start. The sideline-to-sideline battle between LeSean McCoy and linebacker Sean Weatherspoon will be a good one to watch all afternoon. William Moore plays safety for the Falcons. I’m out of Mizzou guys now, so I think I’ll wrap it up.

[Editor’s note: None of the entries for this one were particularly great, but we felt bad leaving Matt Ryan out. He seems like an OK guy.]

That fourth-down scramble by Robert Griffin III last week against the Giants scored the Redskins at least three to four prime-time games next year. There is no such thing as too much exposure for the most exciting player in the NFL. This week he plays a limping Steelers team without hair model Troy Polamalu. The Steelers are old and slow, not the best types of people if you are trying to stop RG3. If you are looking for a sleeper, then try Redskins WR Leonard Hankerson, who is slowly becoming RG3’s go-to third-down option.

The past two weeks, Jordy Nelson has sat on Kat Gotsick’s bench and put up 48 points. KAT PLEASE START JORDY NELSON THIS WEEK!!!!!!!!!!!! Also, if you own any other Green Bay Packer, start him this week. Aaron Rodgers is probably going to throw for 350 yards and four touchdowns (Which pains me, as I’m playing Shane Morris’s Rodgers-led team this week). Cecil Shorts could be a good start if you’re in a jam; the Jaguars are going to be down and throwing. With Charles Woodson out, there’s a chance he finds his way to another long score.

God bless Matt Hasselbeck’s love train: There’s a refreshing, old-dude-at-the-frat-house feel to his starts, and the backward-cap back slaps would feel forced if he weren’t so down to sling bombs and buy shots. Kendall Wright is a top-20 guy in targets with 55 — consider him Big Hass’s wingman. Chris Johnson is officially a top-10 running back both in yards and carries. Ride the hot hand. I expect rookie Vick Ballard to fully supplant first-round bust and totem-for–Bill Polian’s–general-managerial-failures Donald Brown; pick up or trade for Ballard, because he’ll be one of those flex difference makers that wins in December.

Dallas is redefining the term “paper champions” this season. Does anyone think they can cover Victor Cruz? Eli Manning had some bad INTs last week, but still managed to eek out a win. Expect another big Cruz game and more sideline yelling from the perpetually hyped up Ahmad Bradshaw. Bradshaw should have another solid game on the ground as the Cowboys are now without LB Sean Lee. Felix Jones didn’t blow up last week like most of us hoped, and this matchup doesn’t instill confidence. If you are going to start one Cowboy, stick with the reliable Miles Austin.

The terrible Saints D (last in the NFL!) means that Denver will be scoring a lot and Brees, Sproles, Colston, and even Moore need to be in your lineup as New Orleans tries to keep pace. Let’s hope that Graham is healthy, because he would tear them apart like the Internet has torn apart Cloud Atlas (too soon?). The Broncos have allowed five TDs to TEs in six games, and I think that continues here. Needless to say, start your Broncos.
— Josh Klein

Looking for a defense? Pick up Oakland. Not that they’re doing anything impressive, but Kansas City sucks, plain and simple. Yes, Jamaal Charles is a stud, but Brady Quinn is not. Carson Palmer, on the other hand, can make a great bye-week starter. He is averaging nearly 300 yards per game and Denarius Moore is averaging almost 11 points per game over his last three games.

Thoughts for this game:

1. Andre Roberts will score more fantasy points than Larry Fitzgerald.
2. Vernon Davis will score a touchdown but have less than 30 yards receiving.
3. Jon Gruden will make a comment along the lines of, “If I was coaching a football team again, I would want a guy like Patrick Willis on that team.”
4. If you live in a place where betting is legal, I might wager some money on the under.
5. Colin Kaepernick will have at least two plays of 30 yards or more.
6. A guy I work with will say, “Well, I’ve got Larry Fitzgerald, they’ve got the San Fran D, and I’m up by two. You write for Grantland, do you think I’ll win?” No. No I don’t.
7. I will seriously consider changing the channel to HIMYM in the middle of the second quarter. I will regret whatever decision I make.
8. Kendall Hunter ends the day with more rushing yards than Frank Gore.
9. ARI 17, SF 12.
10. CM Punk loses the title to Ryb — oh wait. That’s my other Monday-night prediction. Enjoy Week 8!