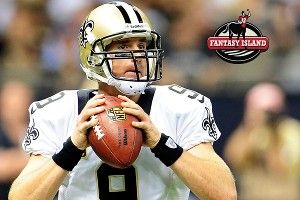 Matt Ryan will have 60 minutes against Carolina to make an early case for MVP. After witnessing the New York passing attack go buck-wild against Carolina, it’s hard to make a case for Carolina magically shutting down Atlanta in the Georgia Dome. Residents of Atlanta are about to witness the sort of insanity typically reserved for Freaknik. White, Jones, and Gonzalez are all safe bets for more than 14 points this week.

If Cam Newton owners are lucky, the Panthers will be playing from behind for the majority of the game as Matty Ice hangs touchdowns on the Carolina secondary. Don’t start any running back for the Panthers — they’re platooning anyway, and it’s not like they’ll be in a hurry to run off the clock. Start Steve Smith and Brandon LaFell, because on offense, it’s not like the Panthers have many better options.

Was last week Brandon Lloyd’s coming out or Rob Gronkowski’s coming in party? I think we will meet somewhere in the middle. One certainty is that the rumors of Wes Welker’s demise were greatly exaggerated. (Say it with me: “They scheme from week to week in New England.”) I’m not sure Welker is deserving of a WR1 spot, but he certainly deserves to be in your lineup, especially in PPR leagues.

I have no idea what is going on with the Buffalo RB situation (writing this on Wednesday), so let’s keep everyone out of the lineup. If you’re desperate, I think Tashard Choice/Fred Jackson/whoever else they will throw out there as the starter can make a good flex. One limb I will go out on — please bench Steeeeeeve Johnson. He is going to be blanketed this week; the Evil Empire is great at scheming to take away what a team does best, and with no healthy RBs to speak of, Ol’ Stevie is the best option on the field for Buffalo

Natalie Kossar: I would feel way worse for the Jaguars and their skill/competency deficits if I hadn’t spent seven years watching a little team called Gryffindor overcome all odds and win pretty much every game they ever played.

Oh sure, Laurent Robinson is out, and I’m not minimizing that, but come on. Katie Bell was under THE IMPERIUS CURSE and they managed just fine without her. And yes, the Jags passing offense has been terrible, but is it really more terrible than Ron Weasley’s keeping anytime he had to go up against Slytherin? Please. Harry always managed to pick up his teammates by catching that snitch. Count on Maurice Jones-Drew to do the same for the Jags. Well, don’t count on him, but he’s the only one that possibly can.

Vincent Jackson owners rejoice! In the never-ending oscillation between ecstasy and throat punches known as The Vincent Jackson Experience, this looks like the non-throat-punch kind of game. The Washington defense is the worst in the league, and they’ve made some really mediocre passing offenses look fantastic (see Rams, St. Louis). The Redskins defense is so bad that you might even be able to start Josh Freeman if you have a quarterback on a bye this week.

Tamara Nolte: Hey, guys. So glad I get a chance to preview the Saints game this week because it plays right into my life passion. Rant time: Why are there such limited resources for public early childhood programs? How do we engage and embrace new parents and enlighten them educating their children from the time they are born? How do we train and inspire teachers to think one step further and to stretch the boundaries of what is accomplished in the classroom?

I’ll tell you how. We get the NFL to suspend Sean Payton FOR LIFE, and I hire him as the CEO of my new early childhood learning company. Why? Clearly, he’s the finest teacher in the history of teaching and the finest coach in the history of coaching. Without him, the Saints are 0-3. He is more than a teacher. He’s an Overlord whose absence makes his students toothless and impotent. Only Drew Brees is a fantasy lock this week. You know he’ll throw a touchdown because if he does, he ties Johnny Unitas for consecutive games with a TD. And oh man, if he doesn’t … oh man.

If Brees doesn’t throw a touchdown, I’m gonna hit him up to help with the Kickstarter — to start raising money for Sean Payton.

Peyton Manning had Face/Off surgery with Chad Pennington. That is the only possible explanation for his arm strength. (OK, maybe it’s the multiple neck surgeries and a year off of football, but still …) This game is the scene where Peyton escapes prison and embraces his new persona, and Oakland’s terrible pass defense is the perfect place for it.

I don’t see Denarius Moore picking up any steam this week, but I do think Darren McFadden should be able to get going against a defense that gave up more than 100 yards to Arian Foster last week.

I always wonder what Fireman Ed is like the other six days of the week. Does he ever revert to normalcy?

This week I think Ed will get a chance to rest his voice. The Jets run game has been sporadic at best with Shonn Greene and Bilal Powell splitting carries. If the Jets can’t keep the 49ers D honest with the run game, then Mark Sanchez will be in for a long day sandwiched between Justin Smith and fresh sod.

With Darrelle Revis out, we should see a big week from Michael Crabtree, and Vernon Davis remains a must-start no matter the matchup. At this point, Frank Gore could be considered the greatest RB in San Francisco history. He’s the focal point of the offense and should remain a top-5 RB for the rest of the year.

Lost in the drama of Goldengate was a legitimately impressive performance from Golden Tate. Tate displayed a penchant for the big play against the Packers that was redolent of his Notre Dame days, when he’d regularly and acrobatically catch Jimmy Clausen’s errant passes vs. assorted military schools. Russell Wilson targeted Tate six more times than he did Sidney Rice, and their chemistry will continue to improve. A spirited golf clap goes out to Danny Amendola for following up his 16-catch game with a decent showing in Chicago; fantasy owners should feel confident starting Sam Bradford’s no. 1 weapon by now.

As a Larry Fitzgerald owner, I made sure to send Kevin Kolb one of those flower arrangements made out of fruit after last week’s performance. I will publicly say here that if Kolb can get Larry 100 yards and a touchdown in back-to-back weeks, then he might be getting that metal dish that allows you to make your own taco shells at home. Big stakes, Kevin. With Beanie Wells out, Ryan Williams should also see quality yards with more opportunity. If the Dolphins are without Reggie Bush, it is hard to recommend anyone else on their offense. If you need help on the bye week, I would go with Daniel Thomas instead over Lamar Miller.

I was confident that this Saints season would play out like Major League. I could even see the cardboard cutout of Roger Goodell that lost a patch of navy suit every time the Saints won a game. In reality, the Saints’ season so far has been more like Groundhog Day. Every week, the Saints D misses tackles, blows assignments, and gives up big plays. Nothing changes. Now they travel to face a Packers team that just might be looking for blood after the Fail Mary debacle. Not a good recipe for Saints success.

Aaron Rodgers will have a monster game, and look for James Jones to make Greg Jennings owners wonder where they went wrong. Jennings was targeted more last week, but it was Jones who made the bigger plays. This also is the perfect matchup for Cedric Benson to have his best game as a Packer.

The injury-free Kenny Britt (say it one more time so you know it’s real) is not, to my knowledge, mired in any legal entanglement. Instead, he’s clearly Jake Locker’s no. 1 target, rewarding fantasy owners that took a late flier on him. Britt is the only Titans receiver I feel comfortable starting, though rookie Kendall Wright is supplanting Nate Washington as Jake Locker’s next-best option and may be a valuable commodity soon. I’m actually in support of trading for Chris Johnson if you’re buying super-low, but he won’t hit his stride this week against Watt, Cushing, Reed & Co.

Eli Manning is the first quarterback to throw for 1,000 yards this season. Michael Vick is close behind with 905 — this is the important distinction between perception and fantasy reality. Despite the hard hits and lack of highlight scrambles, Vick is a guy you need to keep rolling out until Andy Reid pulls the plug.

Victor Cruz and Hakeem Nicks are the best one-two punch in football — enjoy the torrent of targets. Martellus Bennett’s post-Cowboys resurgence is the biggest surprise for me this season. I keep expecting him to take plays off and lineup improperly, and he’s emerged as a top-10 red-zone receiving resource with scores in each game he’s played with the Giants.

Redemption will be on Philip Rivers’s mind as he enters Arrowhead Stadium for the first time since the fateful prime-time fumble that occurred in November of last year. The fumble, which prevented the Chargers from attempting a short game-winning field goal in a game they proceeded to lose, had dire long-term consequences. Because of the NFL’s tiebreaker system, Tim Tebow and the resurrected Broncos won the right to represent the AFC West in the playoffs. This didn’t sit particularly well with the mercurial Rivers, a wound-up ball of frat-boy machismo; he has undoubtedly vowed to return to the scene of the fumble/crime for salvation. As such, I anticipate bigger-than-usual fantasy points from all Chargers.

You may have a very short window to trade for Mikel LeShoure before his owner realizes the full value of the Detroit running back. The Lions have produced two 20-point fantasy running backs in two weeks, and LeShoure now looks like he’s been penciled in for a full workload. That workload, on an offense that can move the ball, is extremely valuable. If I had Frank Gore and I thought the LeShoure owner in my league would make a trade, I would do that deal in a heartbeat.

I legitimately don’t like anyone in this game, as both defenses have been sensational up until this point. Neither team is going to have an easy time passing the football, but it isn’t like Michael Bush or DeMarco Murray are likely to light it up on the ground either. There are certain players you pretty much can’t bench, though, and I still think Bryant is one of those players. Despite his modest start to the 2012 season, Bryant is an elite talent who won’t be held down much longer. Look for him to “go off” for three catches, 30 yards, and a one-on-one screaming session with his receivers’ coach. Just kidding. Take 80 yards and a score to the bank.