Eric Gordon and the Optimism Bias 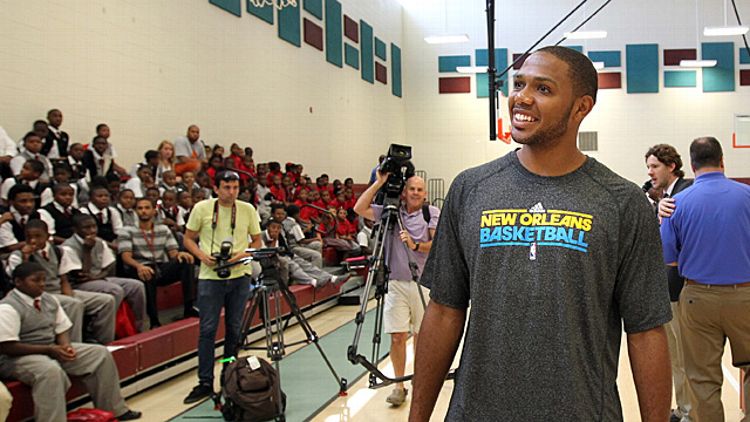 In early July, the Phoenix Suns signed restricted free agent Eric Gordon to a four-year, $58 million offer sheet. Gordon is only 23 years old and is a rising star in a position losing its star power. But he has missed 107 games in four seasons and played in just nine last year. The New Orleans Hornets had a tough decision to make: match the offer sheet and secure one of the more promising shooting guards in the league or leave the Suns to worry about an injury-prone player on a max deal.

Fast-forward to today. Gordon’s a Hornet but he’s not in the lineup. He’s missed every game up to this point, including the preseason, with lingering knee pain. Gordon’s return to the court was last reported to be six to eight weeks away. Given his continued setbacks, it’s easy to be skeptical he’ll make it back in that time frame. Even if Gordon’s rehab goes flawlessly, he’s still slated to miss roughly a third of this season.

It’s only natural for the New Orleans brass to be questioning their investment. Maybe they’re kicking themselves for not working out a sign-and-trade with Gordon when they had the chance. But maybe they’re keeping the faith, holding strong to the idea that Gordon’s injury woes will soon be a thing of the past and he’ll prove to be a cornerstone in their rebuilding process.

The decision the Hornets faced back in July — a common scenario in today’s NBA — carried with it major ramifications. With a strict salary cap and an increasingly harsh luxury tax, it is imperative to make the right call when it comes to huge financial commitments like the one made to Gordon. But as the Hornets initially debated the best course of action, their thought process was influenced by something that affects decision makers in the sports world and beyond: something called the optimism bias.

A Bias at Work

According to Sharot, over 80 percent of the population is impacted by a cognitive illusion that has us view the world through rose-colored glasses.

“In short,” Sharot says in the opening of a recent TED presentation, “we are more optimistic than realistic, but we are oblivious to the fact.”

Can’t All Be the Best

At one point during her TED Talk, Sharot asks her audience to rate their abilities on a series of tasks from driving to physical appearance. When focusing on the ability to get along well with others, she asks who in the crowd believes themselves to be in the top 25 percent. A disproportionate number of the audience readily raises their hands and Sharot quickly points out the presence of the bias.

“Most of us put ourselves above average in most of these abilities,” she says. “Now, this is statistically impossible. We can’t all be better than everyone else.”

The simple exercise Sharot uses to make a point with her audience has a lot in common with how the Hornets assessed Gordon’s situation. Demps had a huge investment on the line. He needed to determine how strongly he felt about his training staff’s ability to handle the chronically injured Gordon.

As with Sharot’s impromptu poll, Demps likely believes his organization excels in this area. Twenty-nine other general managers probably feel the same way.

It’s impossible for every team’s training staff to be above average. Some are great, some are relatively bad, and most are ordinary. The team in the best position to keep Gordon healthy and productive may not be New Orleans. It is more likely the team that signed him to the offer sheet. No matter how good the Hornets trainers are, they simply don’t have the track record of the much-heralded group in Phoenix.

Demps no doubt assumed he had people in place to do the same things a staff renowned for their ability to keep notoriously brittle players on the court could accomplish. If Demps turns out to be overly optimistic in that assessment, there are 58 million reasons he could regret his decision.

You could argue that Gordon’s extended absence will benefit New Orleans. Thanks to the NBA’s lottery system, bottoming out is the best chance a team has to acquire the precious high-end draft picks that generate franchise-changing talent. For the Hornets and other teams in their situation, their goal is to get as bad as possible to become good.

As rebuilding teams around the league continue to pile up losses in an attempt to emulate Oklahoma City’s success, they seem to lose sight of the fact that there is a greater chance their team becomes today’s Kings or early 2000s Clippers than the Thunder. ESPN.com’s Beckley Mason pointed out last March that Oklahoma City beat some seriously long odds not just to acquire one superstar-caliber player through the draft, but three.

Sharot confirms that this is just another example of the illusion at work. She explains that a large part of the optimism bias is how we perceive information. We are systematically programmed to learn more from feedback that enhances our ideal result rather than information that goes against where our goals lie.

In a copycat league, this means that executives of NBA teams are hardwired to put more stock in the Thunder’s success — though less likely — than they are to learn from the failure of the Kings or Clippers.

Taking a Gamble on Potential

The safest way to build a contending team is simple: have good players on good contracts. But too many teams complicate this philosophy by inking players to risky deals despite serious red flags. Gordon’s max contract, in lieu of his injury concerns, hardly stands out compared to other deals doled out in recent years.

Take Darko Milicic’s four-year, $20 million contract generously handed out to him by Minnesota GM David Kahn in the summer of 2010. Or Michael Beasley’s three-year, $20 million contract from Phoenix this offseason. Both players lure teams in with the siren song of their ability but have consistently failed to live up to expectations while bouncing around among numerous organizations. Minnesota and Phoenix are banking on the notion that these enigmas will finally put it all together for them.

Sharot says this is a rather common thought process. Like companies in the business world, teams will give fans a laundry list of reasons why things didn’t work out for players in their previous stops while laying out a plan for how things will be different this time.

“You can come up with all the reasons for why it didn’t work for them,” she says, “But for [the team] it will work because we’ll do it in all the right ways.”

In the vast majority of these cases, it doesn’t work out. Milicic was eventually amnestied by the Timberwolves. Beasley could very well end up the same apathetic, shot-happy player for the Suns that he was in his previous two stops. In the end they are just two examples of a team squandering millions with a consistently low return on their investments.

Dealing With the Bias

Even if the NBA executives were aware of how their decisions were being affected by the optimism bias, how could they protect themselves? Sharot says the answer is in correctly evaluating past experience.

With new data and formulas flooding NBA front offices daily, objective analysis can provide a stark reality for overly optimistic decision makers to fall back on. Most of these advanced metrics are currently geared toward on-court performance, but there is no reason to stop here.

Perhaps forward-thinking organizations could create a series of evaluation tools for personnel decisions. This could include tracking the return value from contracts handed out to players with health concerns and grading formulas for training staffs based on their ability to limit games missed due to non-contact injuries.

The statistical possibilities are endless, but personnel decisions will always be an inexact science. Every situation involving players with character risks, injuries, or motivation issues will be different. General managers will need to do their best to combine hard data with a realistic view of how similar situations have worked out in the past, making sure to guard against the natural proclivity to see their own organizations as ideal rehabilitation centers.

There’s a chance for NBA organizations to change for the better. Just don’t get too optimistic about it.

Revisiting Our Visit With the Sports Fan in Chief