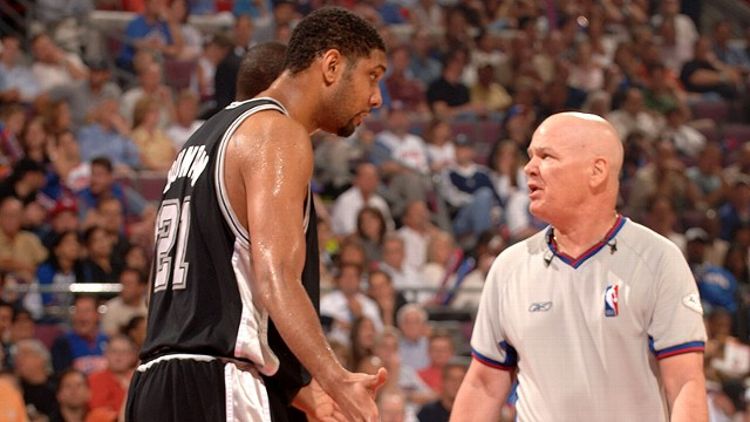 It was one of the lowest moments in the history of NBA officiating: Joey Crawford, hot-tempered as always, ejecting Tim Duncan during a late-season game against Dallas, ostensibly for chuckling on the bench. The fallout was worse than the act, which was pretty bad. Crawford had T’d up Duncan in another recent game, and Duncan accused Crawford of entering the Dallas game with “a personal vendetta” against him. The league suspended Crawford indefinitely, citing both the Duncan incident and “similar prior acts” — a reference to Crawford’s bizarre ejection/stare-down confrontation with then-Dallas coach Don Nelson in the playoffs four years earlier.

Crawford returned to the league the next season, but at the time, there was doubt he would ever officiate in the NBA again. Crawford expressed regret over the Duncan incident six months ago in a first-person piece in the New York Times, in which he also details his very real anger issues (he once broke his finger signaling for a technical foul) and his time spent with an anger management psychologist.

The Crawford-Duncan incident, and especially Duncan’s use of the word “vendetta,” fed into conspiracy theories about particular officials being out to get particular teams. The most famous example was probably Danny Crawford (no relation) and the Mavericks; Dallas at one point was 1-15 in postseason games in which Crawford was one of the officials, spawning very real concerns around the league — and within the Mavs — that Crawford was being unfair to the team. The trend reversed itself with several Dallas wins during the Mavs’ 2011 title run.

But the perception that Joey Crawford hates the Spurs and/or Duncan lingers in the crazy and semi-crazy corners of NBA fandom. Crawford officiated San Antonio’s elimination loss to the Thunder last season, and when a few difficult 50-50 calls went against the Spurs, those crazy corners immediately went into “blame Crawford” mode — even though the calls were bang-bang plays, and there were two other officials working the game. (Side note: The hilarious thing about that series was that a segment of Oklahoma City fans were sure Crawford was out to get their team. Boston fans, meanwhile, were worried the fix was in at the same time against the Celtics when the league assigned Crawford and alleged Doc Rivers–hater Bill Kennedy to Game 4 of the Eastern Conference Finals — a game Boston won after LeBron James controversially fouled out. The reality is that NBA officiating is an insanely difficult task, and that every possession, with 10 bodies moving very quickly within a confined space, features little bits of contact one could consider fouls. Within that reality, fans see what they want to see.)

There are a few recent and soon-to-be-published academic papers on NBA officiating that have found evidence of very small biases on the broader team level — biases in favor of home teams, teams behind in playoff series, and teams trailing by large margins late in games. But even the authors of those papers concede that the effects are tiny, and could be explained by randomness or unconscious bias.

Ryan Rodenberg, a sports economist at Florida State University, went a different route and tried to isolate the impact and alleged bias of one official against one player/team: Does Joey Crawford really hate Tim Duncan? And does he take that hatred out on Duncan’s team in a meaningful way?

In a paper that is scheduled to be published in a peer-reviewed journal and has been shared early with Grantland, Rodenberg concludes there is no evidence that Crawford’s officiating had any real negative impact on the Spurs from the 2001-02 season through last season. The conclusion mirrors the results of an earlier study by Wayne Winston, one of Rodenberg’s mentors and a former stats consultant for the Mavs. But Winston’s study only analyzed three seasons right around the ejection incident; Rodenberg’s goes back further and extends almost to the present day.

The methodology is pretty simple once you boil it down. Rodenberg looked at the expected scoring margins and win-loss outcomes of every San Antonio game in that span and measured whether each individual official who refereed a Spurs game during that time — 95 refs in total — had any noticeable impact in either direction. Rodenberg calculated expected outcomes in two ways: Las Vegas points spreads and Jeff Sagarin’s team ratings published in USA Today. Sagarin uses his ratings to predict final margins in each game, with a built-in boost for home teams.

The Spurs obviously had an actual record and actual scoring margin over that decade-plus. We’d expect the 95 officials to form something like a bell curve around those actual results, with almost all of them having very little impact either way, and a few outliers on either extreme who end up there through randomness or small-sample-size effects.

And guess what? Joey Crawford is right in that meaty middle section, with all the other officials whose work had no discernible impact on San Antonio’s performance. Crawford’s presence had a minuscule negative impact on the Spurs’ performance relative to Sagarin’s predictions and Vegas point spreads, but dozens of other officials had a larger negative impact, and the Crawford effect is essentially zero, Rodenberg says. He had no impact at all on their win-loss record compared to expectations in a vacuum.

“Duncan made it seem like there was some systematic bias against him,” Rodenberg says. “But there wasn’t at all.” The league declined comment on the study, but David Stern has supported Crawford since the suspension was lifted.

Rodenberg isolated playoff games to see if perhaps Crawford was saving his vindictive officiating for high-leverage moments, but he found nothing there, either, he says.

The missing piece in all these academic studies is data on which official called each foul. The NBA has that data, but they don’t share it. That data would allow for more micro-level analysis, including whether Crawford himself whistled Duncan specifically for an unusual number of charging calls, three-second and traveling violations, etc. If that kind of analysis found nothing, the Crawford-Duncan controversy would be pretty much 100 percent debunked.

But this paper comes pretty close. The Duncan ejection was an embarrassment, and Crawford was blatantly in the wrong. It was borderline disgraceful, and San Antonio fans were right to question whether Crawford belonged at San Antonio games in the immediate aftermath of his suspension. But all the evidence we have suggests it was a one-off incident and not part of a broader Crawford anti-Spurs conspiracy.