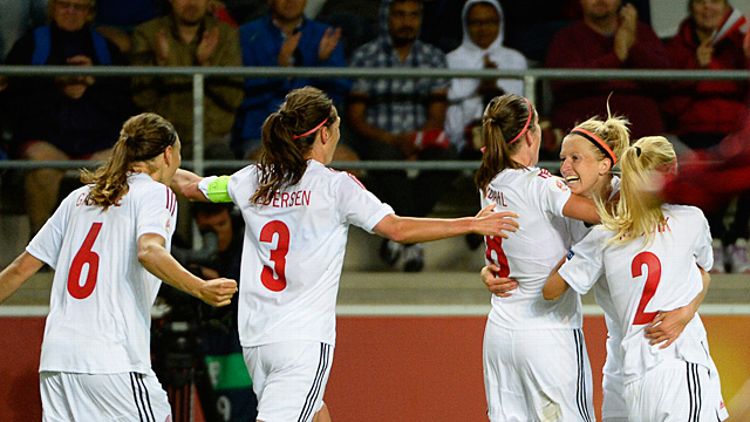 After an unlikely victory over France in the Women’s European Championships earlier this week, Denmark has managed to find itself in the semifinals (the team plays Norway today).

That’s notable for a couple of reasons. First, Denmark has yet to win a match in the tournament. They drew two of their group games, then played France to 1-1 in their quarterfinal match before advancing on penalties (so technically a draw). That would seem a remarkable achievement had Paraguay’s men’s team not bested it two summers ago by making it all the way to the final of the Copa America without winning a single match. For Paraguay, such a flukey run seemed more an inevitability than luck, though. That’s because the word “Paraguay” itself translates roughly as “good at exceedingly dull low-scoring draws in major tournaments.”

To say the Danish women were lucky to get by heavily favored France is, in one sense, a bit misleading. They were lucky in the way that Chelsea were lucky against Barça in the second leg of the 2012 Champions League semi. Despite being clear underdogs, both teams had a plan — defend at all costs — and executed it almost perfectly. Neither may have been the “better” team as measured by the run of play, but both did what they needed to win.

But in another sense, the Danish women were very lucky, only surviving in the tournament literally due to the luck of the draw. That brings us to the second notable thing about Denmark’s progression in the tournament: Denmark advanced to the quarters only after winning a lottery.

The Women’s Euro is comprised of three groups of four teams. For the quarters, top teams in each group advance along with the two best third-place teams. After the group matches, third-placers Denmark and Russia were level on points in a tournament that chose to ignore goal difference in tie-breaking, so they went to a drawing of lots to determine who would get the last spot in the knockouts.

You can see the draw here (scroll down to the second video on the page). It is actually depressing. From the fact that (a) they don’t show anyone from the Danish team, and (b) nobody cheers when Denmark is drawn, it’s seems safe to infer that the Danes weren’t even there. Witness a bowl with a couple of balls in it, followed by a bunch of really sad Russian women getting dumped out of the tournament — not by a stunning free kick, a miraculous save, or a shanked penalty, but by the hand of an administrator in a sensible suit.

There is actually a bit of history to sporting outcomes hinging on a coin flip or similar 50-50 draw. There is the Rockets twice winning a coin toss for first pick in the NBA draft (1968 and 1983). The ownership of Secretariat was decided by the toss of a coin. A potential $45 million payout almost came down to a 50-50 draw in May as, entering the last week of the EPL season, Chelsea and Arsenal were a couple of realistic scores from ending the season tied on points, goal difference, and goals scored. That would have meant drawing lots to see who went straight to the Champions League group stages and who had to endure a home-and-home to qualify. And losing that would mean losing double-digit millions (something Arsenal might still manage to do).

But those aren’t actual wins and losses (although drafting Elvin Hayes and Ralph Sampson are kind of “wins” in some respect). The biggest actual game to be determined by a coin toss couldn’t be in larger contrast to the sadfest the Russians were party to earlier this week. In the semifinals of the 1968 European Championship, hosts Italy and the USSR played to a 0-0 draw. So a spot in the final of a Euro — the second-biggest tournament after the World Cup — came down to the toss of a coin.

Looking at it now, it seems like crazy people must have been running soccer in the ’60s. But penalty shootouts as we know them now hadn’t been introduced into the game yet. Moreover, because this was a semifinal, there was no room on the calendar for a replay — the usual way to settle these things back in what must have been the dark ages.

After the game — and this was right after the final whistle — a player and an administrator from each team went to the locker room, along with the match referee. The referee pulled out a coin; Italy’s Giacinto Facchetti called “tails,” and the coin came up tails. Italy won. But this happened out of sight, so it wasn’t until Facchetti emerged from the tunnel with his arms over his head that the crowd learned the outcome and erupted.

It’s surreal to watch. There is this silent stadium, ignorant as to what the outcome is. There is no camera in the dressing room. There is no announcement. Nothing. Then this man steps out with his arms up and 70,000 people (remember Italy was hosting) act like their dying wish has been granted. You used to be able to watch it here (what, you don’t bookmark obscure sports moments that hinge entirely on non-sporting chance?), but the video has been taken down. Other highlight clips from the ’68 Euro lack that critical bit for whatever reason. You can see a few frames of the postgame celebration here, but, curiously, one of the stranger moments in sports history is no longer immediately accessible.

There is a bit of a postscript in that the final (Italy vs. Yugoslavia) also ended in a draw (1-1), but unlike with the semi there was no other match on the calendar, so a replay took place two days later (Italy won that 2-0).

Forty-five years is a fair amount of time, but even by the early ’90s, the PK shootout already felt like it had always been part of the game. And, looking back now, things like deciding a match on a coin toss or not having the final be, you know, the final — imagine trying to sell that to a TV executive: “Hey, the Super Bowl is going to be on Sunday. Unless they tie, in which case we’ll play it again on Wednesday” — seem Cro-Magnon in nature.

Things may have changed in the game, just not the sparing of the Russians (or their Soviet predecessors) from the cruel whims of the fates. But the Danes probably aren’t complaining.