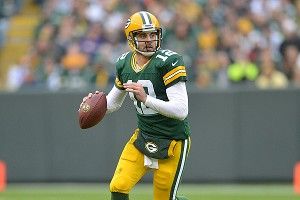 Before Thursday night’s game, teams that were 8+-point underdogs at home were 21-1 against the spread. 21-1! Leave it to the dismal Raiders to screw up that trend.

But still, that’s a bizarre progression — one that will undoubtedly trip up even the most astute degenerate gambler. That’s why I like that I stay clear of the lines themselves and play the prop bets, where there are no pitfalls to speak of whatsoever. Yeah, right.

We took a little hit last week, shaving 7,500 off our bundle, which took the grand total to 210,000 jermajesties* overall. Our quest for a million jermajesties in the hopes to buy some really cool fake Christmas gifts begins … right now.

Why the hell am I doing this? Betting on the Jets starting quarterback to go INT-less is like rooting for the daughter on Homeland to say something chipper. Seems unnecessarily risky. My gut feeling is that the chastised Sanchize rights the ship this week against the 28th-ranked pass defense in the NFL — keeping his job for the remainder of 2012. Although, I may hedge-bet Tim Tebow aggravating his rib injury laughing at Sanchez’s misfortune. 5,000 jermajesties

Waiting for these lines to come out is going to take some patience, but it’s well worth it — I promise. I don’t have any numbers to back it up (other than the mound of jermajesties piled up in my account) but the Cardinals and Chargers are the best NFL teams to bet against at halftime … as well as full time. 10,000 jermajesties each

I don’t get why these numbers are so high. Matthew Stafford has recorded 3,742 passing yards this season (third highest in the NFL) and Aaron Rodgers is the Aaron Rodgers, who plays quarterback for the Green Bay Packers. Sunday’s passing champ doesn’t get crowned until 11:30 p.m. EST. 5,000 jermajesties each

I’m warning you — two of these bets are going to lose. But only two. There’s good value in these breakdowns. Five of the Saints’ seven losses have fallen in this range (7 to 17 points). It’s almost as if the players are being paid a reverse bounty to lose by double digits. Go get ’em, Roger! 2,500 jermajesties each

5/2: Odds that Johnny Manziel will be forced to give CPR to one of the octogenarians lined up behind him at the Heisman Trophy ceremony Saturday

Have you ever seen this crew of previous Heisman winners? It’s like members of the Elks Lodge gathered for an Andy Griffith Show marathon. All kidding aside — I actually get a kick out of seeing the past Heisman winners from as early as 1945 reconvening at the Downtown Athletic Club in New York each December. Reuniting to tell old football stories while making fun of Gino Torretta has got to be fun at any age.

Even: Odds that the NFL competition committee is forced to remove the word “competition” from its title after voting to ban kickoffs in the offseason

To quote Chris “Mad Dog” Russo: “This is a tewwiba, tewwiba, tewwiba idea.” A football game without a kickoff is like a Friends episode without the dancing around the fountain. And what’s with the alternative plan? I guess instead of kicking off, a team starts with the ball fourth-and-15 at their own 30-yard line — at which point, they’ll presumably punt? Why do I feel this ends in Bill Belichick going for it on every kickoff, resulting in a game in which the Patriots’ opponent never gets to run an offensive play? If he were dead, Gale Sayers would be rolling 100 yards in his grave right now.

What will happen first: The Carolina Panthers win a coin toss, or the United States Mint does away with coins altogether?

The Panthers have lost every single pregame coin toss so far this season. An astounding 0-for-12. I just plugged in ½ to the 12th power and got 0.00024414062. That’s a ridiculous number. I don’t know what it means, but rest assured, it’s ridiculous. I wonder if the Panthers will allow coach Ron Rivera to keep the coin as severance after they fire him four weeks from now.

12/1: Odds that rather than force wide receiver Plaxico Burress to don their throwback getup, the Steelers allow him to wear his old prison uniform

What’s the difference, really? I’m not sure which says “felon” more — the head-to-toe orange jumpsuit or the bumblebee vomit throwbacks. They should let Joan and Melissa Rivers decide once and for all while touring Heinz Field via Attica.

1/30: Odds that I go into cardiac arrest when Terence Newman intercepts Tony Romo this Sunday in Cincinnati

It’s going to happen, isn’t it? This dirtbag defensive back, who refused to tackle or defend a pass his last two years with my beloved Cowboys, is going to light it up Sunday just to drive me crazy, isn’t he? Please, Mike Zimmer — have mercy on our pathetic souls.

3/1: Odds that this Sunday night, Bob Costas regales the American football viewer with his thoughts on deforestation vs. logging

I don’t think I’m alone when I say I want to hear Bob Costas’s take on gun control about as much as I want to hear Orrin Hatch’s views on when to bust out the tackle-eligible play. Actually, I wouldn’t mind that much at all. If you’re reading, Orrin, send me a tweet.

1/25: Odds that I go back on my word and bet this Pacquiao-Marquez fight after swearing up and down that after the Pacquiao-Bradley screw job I would never wager on boxing again

Too late — I lose. I already have a substantial amount of jermajesties on a parlay with Denver money line (winner), Seattle (money line), and Pacquiao-Marquez to go over 5.5 rounds. And if promoter Bob Arum screws me with an early stoppage, I’ll swing him around by his nasty ear hair for the rest of eternity.

Incidentally, if you haven’t seen my good pal Guillermo’s intense training and even more intense acting by Manny Pacquiao in a bit that aired a few weeks ago on Jimmy Kimmel Live, please check it out. It’s right there — just click the arrow. Yep, the one in the middle … atta boy/girl.