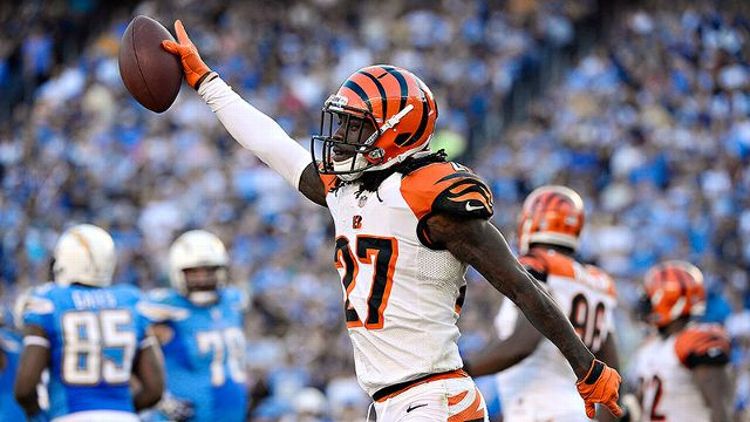 Season Total: 0 jermajesties (Is that even possible?)

Yes — that is possible and accurate. After 13 weeks and 20,000+ nonsensical babbling words, my NFL proposition picks have netted you exactly zero jermajesties. (Obligatory weekly explanation: A “jermajesty” represents the fake name given for a dollar amount in this series. It’s also the unfortunate name of one of Jermaine Jackson’s sons.)

As ineffectual as I’ve been, I refuse to take the blame for last week. That Titans first-half screw job was one for the ages. Not to mention, I went a remarkable 0 for 3 in a three-team 10-point teaser. That’s very difficult to do. In fact, I really should receive something for that stellar effort. Maybe malaria?

Bengals -3.5 in the first half over the Colts

In their last two home games, Cincy have outscored their opponents 59-19 in the first half. The Colts are notoriously slow starters. Even slower when the refs don’t call phantom personal fouls 30 yards away from the play with no time remaining in the second quarter. Yes — still very bitter. 15,000 jermajesties

Patriots will score over 29.5 points vs. Browns

You know what we haven’t seen this year? A good old-fashioned Patriots stomping at home. I’m talking the 45-7 variety we’ve become so accustomed to in the Bradychick era. Well — it’s here. The total has gone over in four of the last five Pats/Browns games and five of New England’s last seven games overall. Oh … and last week the Jags scored 32 versus the Browns’ defense, so you see which way this is going. “Tanks” for the freebie, Cleveland. 20,000 jermajesties

As magnificent as he’s been, Newton has gone over his over/under rushing total only once in his first six road games this season. After getting hammered in Seattle last week, Rob Ryan’s eighth-ranked defense looks to flex its flowing gray locks. 20,000 jermajesties

49ers +7.5 over Seahawks
This is the ultimate hangover/letdown game for the Seahawks. After pummeling the Saints on Monday night, Seattle has a short week to regroup against a 49ers team that is out for blood. San Francisco needs it more. Also — I’m told Michael Crabtree’s return (two receptions last week) makes a huge difference.

Over/under 9.73 lbs. of pumpkin squash stuffing vomited up by me after going 0-3-1 in the Las Vegas Hilton Supercontest last week

For the few of you who are still interested, @HousefromDC and I are currently tied for seventh. We were tied for second place heading into last week before suffering brutal losses against the spread at the hands of Baltimore, Philly, and Chicago — all three of which had double-digit leads heading into or well into the fourth, putting that ugliness way behind us. (Not really — still stings like a chlamydia vaccination.) Don’t tell anyone, but this week we’re going with:

How is it possible to emit that much water from one’s eyes? It’s David Blaine–esque! Little-known fact: Knowshon Moreno’s personal trainer doubles as a plumber. Let’s hope he’s never interviewed by Oprah — we could have Katrina-like results. Seriously, I haven’t cried this much since last Sunday, when I went 0-3-1 in the Hilton Supercontest.

12/1 odds that, during this week’s Colts-Bengals game, either head coach — Marvin Lewis or Chuck Pagano — stabs referee Jeff Triplette in the chest with a first-down marker

We probably shouldn’t be making this big a deal of the officials’ miscue in last week’s Redskins/Giants game. I don’t mind if they get one wrong now and then. Furthermore, the call had no real impact in terms of influencing playoff implications. But do they have to be such dicks about it? Half the crew called for the chains to be moved, indicating a first down, while the other half insisted it was third-and-1. And as a group, they were completely unapologetic. Ignoring, in fact, Mike Shanahan, who was pleading for an explanation. Let me remind you, fellas — you’re not highway patrolmen looking to bust people for possession of ecstasy. You are referees of a football game. And — best of all — you’re wearing silly zebra outfits while carrying tiny yellow parachutes. So don’t keep taking yourselves too seriously, or we’ll be happy to go back to the replacements. Never mind.

-3000 that while recapping the Raiders-Jets matchup in his “Two Minute Drill” segment, Chris Berman mentions the Heidi Bowl

Death … taxes … and 45-year-old references by the Swami.

Over/under 9.99973 on a scale of 1 to 10 as to how glad I was to have abstained from gambling on last night’s Jags-Texans game

That’s an easy over. There was no way I was picking it right. Even knowing the final score now, I’d still be terrified to bet it. With their propensity to be consistently inconsistent, these two teams have cost me an automobile this year. Let’s just say somewhere between a ’74 Nova and a ’03 Ferrari Enzo. Leaning more toward Enzo. The least they could’ve done is had me flip the coin … and then let me keep it.

I imagine this is the pep talk Trestman gave Robbie Gould before his field goal attempt in OT last week: “OK, Robbie, here it goes: 47 yards. Try to forget that your wife just gave birth last night and that we’re in a super-loud dome and that we have three downs to spare to make this a little more manageable for you. I’ve got a ton of Christmas shopping to do at the Mall of America, so let’s get this over with ASAP!”

@BillSimmons have you ever noticed the resemblance between a young Red Auerbach and @TheCousinSal? Could this be why you’re so drawn to him?

First off, Rico — there is no such thing as a young Red Auerbach. It’s a known fact the NBA coaching legend was 396 months old at birth. Aside from the balding cranium and a fondness for thrift-store-bought suits and cigars, there’s no resemblance whatsoever. Sorry.

I don’t know what any of this means, but you are totally welcome.

Odds on which contributor will be the first to strip naked and do a cannonball in the swimming pool, all while holding onto and not spilling a drop of his or her Moscow Mule this weekend at Sportsish Guy Simmons’s Grantland Christmas Party

Jacoby seems like a steal, but I’m taking the “field” and parlaying it with Klosterman’s facial hair clippings doing irreparable harm to the pool’s drainage system.

7/2 odds the two dancing maniacs featured this week on Jimmy Kimmel Live partner up, take their act on the road, and raise enough money to dig Detroit out of financial ruin

A bonus 12/1 odds that young Antwain and Cheryl Burke take home the mirror ball trophy during Season 36 of Dancing With the Stars. I have high hopes for that pudgy little fella. That’s that. Enjoy week 14.

Why Robinson Cano's Gigantic Deal Is Smart for the Mariners, and What It Means for the Yankees