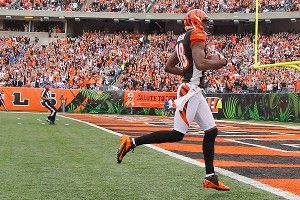 Only I could win four out of five of my major prop bets, go 3-and-0 with my best bets against the spread, and not have a dime to show for it. Yes — I too loaded up on a three-team teaser with the 49ers over the Rams. Neither team won, so as a result, I became the only loser. They say a tie is like kissing your sister, but I’d like to see another example of a peck on a sibling’s cheek that results in a lost car payment. And that includes the oddly amorous connection between Angelina Jolie and James Haven last decade.

For those keeping track — in make-believe degenerate gambling land, I netted +47,000 jermajesties*, which takes it to +112,050 jermajesties overall this year.

Five and a half minutes is the least amount of time I’ve seen tied to this prop — and with good reason. The Raiders gave up 55 points last week. The Saints give up 55 points per drive. This wager is a winner — even if the scoreboard operator switches to soccer’s running clock rule. 20,000 jermajesties

The Patriots will score more than 31.5 points vs. the Colts

Say what you will about the Patriots defense — their soft open-field tacklers … their unimaginative play-calling … they sleep with every Southie in Dorchester. Say all that — because it’s true. Actually — the defense doesn’t really figure into this prop, except for the idea that New England quarterback Tom Brady will do everything in his power to make sure Colts QB Andrew Luck isn’t the big story come Monday morning. My gut says the Pats flex their muscles and put up big offensive numbers at home. 25,000 jermajesties

These two teams have played a low-scoring game every two years, dating all the way back to 2008. Take a look at this long, storied trend of offensive struggles in even years:

Check your calendar. It’s 2012, and we’re due. All previously stated nonsense aside — this game features a backup QB in Byron Leftwich, who’ll play it pretty conservatively on account of him sucking and two defenses that are stingier than Mr. Krabs on payday at the Krusty Krab. (Apologies for the obscure analogy. My kids watch SpongeBob SquarePants 37 hours a day.) Under 28 points is a smart play. 3,000 jermajesties each

Green has scored in eight consecutive games for the Bengals. In nine games, the Chiefs have allowed a total of 12 TDs to opposing receivers. Kansas City is as close to looking like a team that has quit on its coach as I’ve seen this year. It doesn’t help that the Chiefs have to cover a stud wideout who is virtually uncoverable. Add it all up, and this week “A.J.” stands for “Adding Jermajesties” to your bank account. 10,000 jermajesties

Over/under 7.5: Number of concussions in the Steelers-Ravens game Sunday night

This would be as good a time as any to introduce my mandatory Nerf helmet rule. Commish Goodell watches this one with one evil eye closed.

Number of Jaguars first downs this Sunday against the Texans vs. the number of minutes before the first fan leaves Reliant Stadium out of boredom

I’m thinking the number to beat in each case is approximately 5.5. J.J. Watt has an excellent chance of breaking Elmore Smith’s NBA record of 17 blocked shots (in this case, passes) in one game. Cover up, Blaine Gabbert!

7,500/1: Odds that while viewing the Bears and 49ers backup quarterbacks duke it out, Monday Night Football color commentator Jon Gruden utters his famous line: “I get goosebumps watching guys go after each other like this.”

This is what we’re looking at if Alex Smith can’t shake the cobwebs free. Kaepernick and Campbell sound less like two starting quarterbacks on Monday Night Football and more like the firm that screwed up my taxes this year.

3/1: Odds the anonymous Jets who said Tim Tebow was a “terrible” quarterback get struck by lightning and turned into pillars of salt

Is it possible that Tim Tebow was one of these mysterious anonymous Jets? It would be a great way to garner sympathy from fans. Like sending yourself flowers on Valentine’s Day. Either way — I like the idea of the “Anonymous Jets.” They seem to have an edge to them that the regular Jets don’t. My bookie’s letting me take the Anonymous Jets (-13.5) over the Identified Rams this week. The blurred faces and nameless jerseys are going to make it tough for the announcers to keep track.

398,000/1: Odds that Chiefs safety Eric Berry has Seabiscuit in his Blu-ray DVD collection

If you haven’t watched this video of the star defensive back/equinophobe Eric Berry struggling to co-exist with a mascot horse, please do yourself a favor and get ready to laugh your ass completely off. I’m currently looking into nominating Berry for the Emmy for best comedic performer in an NFL highlight.

1/6,000: Odds that you too have a dispensable “friend” just like the Facebook users featured in this video that aired on Jimmy Kimmel Live

Saturday, November 17, is National Unfriend Day. It’s a holiday fabricated by my Cousin Jimmy a few years back. The point of National Unfriend Day is to urge people to get rid of their annoying Facebook friends all at once. Here are some examples of people worthy of un-friending:

Please participate in this worthwhile event and rid your life of these life-sucking cyber-monsters.

Oh, and if you have time after that, donate to the Sandy Relief Fund, too.