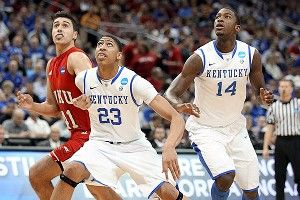 Welcome to March Mad Men! There we go. All I needed to do was come up with a lousy pun to serve as an excuse for putting together a Sweet 16/Mad Men premiere combo blog. My picks last week were about as effective as a Mark Sanchez/Tim Tebow platoon. (Is that really happening?) The plan is to bounce back with some NCAA winners with the help of my friends at Sterling Cooper Draper Pryce. Here we go:

Marquette -2 over Florida
Bad news for Florida. No more Norfolk States on their path to the NCAA championship. Instead they run into a high-scoring team who, like them, enjoys running but with a much more physical frontcourt. And for those who don’t believe me I have one word for you … Darius Johnson-Odom … Esquire … the third.

Glasses of scotch/bourbon/rye consumed over cigarettes smoked by Don Draper in Season 5 (-140)
This is tricky because you may remember Draper, in attempts to lash out against Lucky Strike, who pulled their account, wrote a New York Times manifesto about the tobacco industry entitled “Why I’m Quitting Tobacco.” If he’s true to his word, look for him to step up the boozing, which will undoubtedly lead to him sharing a rehab smoosh room with The Situation in Season 5.

Wisconsin/Syracuse largest lead under 12.5 (-115)
Let’s face it — there may not be 12.5 points scored in this entire game. Both teams play shutdown defense. The Badgers don’t score enough to cover this spread and Syracuse is at least one suspended 7-foot Brazilian away from hitting the over.

Over/under 6.5 episodes before we see Betty Draper crack a smile
Take the over with this one. Only way it’s happening is if AMC accidentally airs an outtake.

Kentucky’s Anthony Davis over 24.5 points/rebounds
Back in the December loss vs. the Hoosiers, Davis was held to six points and nine rebounds. The odds-on favorite to win NCAA tourney MVP will be driven to improve those numbers tomorrow night. I say he does it the hard way — no points and 25 boards.

5/2 odds Peggy Olson gets high on the wacky weed at another beatnik party
I don’t care what kinds of drugs she experiments with so long as at the end of the night she ends up bedding down with creepy drunk womanizer Duck Phillips. Incidentally, Duck Phillips is easily the best TV name since the Simpsons rolled out Apu Nahasapeemapetilon (FYI, Grantland pays me by the character).

135/1 odds that UNC point guard Kendall Marshall plays and uses his cast to clobber an Ohio player in the head while the referee is distracted
This tournament is in dire need of a Cowboy Bob Orton moment.

Over/under 2.9 seconds into the first scene he appears in this Sunday’s premiere episode before Roger Sterling makes me laugh
Under. He’s the best. He really is the funniest prick on TV. The perfect combination of Kenny Powers and any character ever played by Dabney Coleman.

Team to score first, Baylor (-125) over Xavier
This is an easy one. Especially when considering Baylor has that giant Brittney Griner guy at center who always wins the opening tip. Oh — that dude plays for the Baylor women’s team? My bad. All bets are off.

1/50 odds that Joan is pregnant with Roger Sterling’s baby
This one’s a slam dunk. We all know Joan’s impotent rapist serviceman husband didn’t get the job done. The bigger point here is that regardless of who the father is — there is no luckier baby in the world. That is — until Joan switches to formula.

35/1 odds Indiana gets lucky again and wins by two points because their effing opponent scores one effing basket in the last 11 effing minutes after refusing to penetrate the effing perimeter with more than 10 effing seconds left on the effing shot clock in any of those effing possessions
Can you tell I lost a boatload on VCU last week? Maybe Shaka isn’t so Smart after all.

7/2 odds that one of Mad Men’s Season 5 episodes focuses on the 1966 assassination of Hendrik Verwoerd, prime minister of South Africa and architect of apartheid, who was stabbed to death by Dimitri Tsafendas, a parliamentary messenger.
Thanks, Wikipedia. I have no idea what the hell I just wrote.

30/1 odds an African American who is not wearing a uniform appears on a Mad Men episode this season.
I’m just trying to get Al Sharpton riled up in the remote chance he’s a regular reader of my irregular blog.

Even odds that Jon Hamm returns to my fantasy football league after being unceremoniously booted last season
If you can bare to listen to me on the B.S. Report you probably know that The Sportsish Guy and I are in a fantasy football league where every year the winner gets to vote one of the other teams out of the league. We start with 11 teams so the following year the team voted out gets to replace the new squad that’s been ousted. Yes, I thought of it, and yes, it’s the greatest fantasy wrinkle of all time. The best part is the person getting tossed doesn’t find out about his fate until the night of the draft in early September. So needless to say our buddy Jon Hamm was none too pleased when after a 12-hour Mad Men tape day he raced over to the bar where we held the draft only to find out he wouldn’t be participating in our 2011 fairy tale football extravaganza. True to his TV persona, he didn’t throw a fit, gave a confident nod, took an even more confident swig of alcohol (this time Lite beer that had been sitting out for hours) and walked away, dignity still intact. On the other hand, Elliot — the guy who is responsible for this result — was immediately villainized for voting JON F*&#ING HAMM out of our league. In fact, you can’t even take bets on Elliot being voted out this year. There’s absolutely no action on the other side.

Anyway — we’re all hoping Hammy returns for 2012. At least I do. Way too much pressure being the most handsome team owner in the league.

That’s that! Enjoy March Mad Men (had to get it in there one more time).