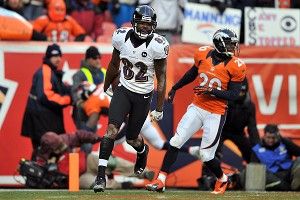 Is it possible that there are only three NFL games left? (Shut it — I’m not counting the Pro Bowl and you shouldn’t, either.) I’m starting to get depressed. In a matter of two weeks, all television will have to offer us is Z List celebrity diving, one-armed Bachelorettes, and ad nauseam coverage of how Manti Te’o’s (really — two apostrophes?) imaginary girlfriend caught cancer from a car crash.

But let’s focus on the little we have and how we can turn a profit. Big score for me last week. I picked the Ravens to upset the Broncos. Easy. Never a doubt. That wager raised my year-to-date jermajesty* total to 140,000. Our quest for a million jermajesties continues this conference championship week.

Colin Kaepernick under 60.5 rushing yards vs. the Falcons

I must be nuts, right? Just a few days ago, against the Packers, this guy ran for three times that number (181 yards). I have a strong feeling that former 49ers coach — now Falcons defensive coordinator (built-in revenge factor) — Mike Nolan will have an answer for the rookie QB. My guess is the “everyone go deep while I sprint up and down the field like a gazelle pumped up on cocaine” plan of attack won’t work as well this week. I’m not saying last week was a complete fluke, but in his previous four games, Kaepernick rushed for 53, 28, 31, and 5. The under is the play. 150,000 jermajesties

Now that they got the unpredictably crazy games out of their systems, I expect some better red zone defense from both teams. The way these playoff games are going, you might see three field goals in overtime alone. 50,000 jermajesties

Yes, I know. I had this last week against the Patriots and lost when the Texans couldn’t keep it within 17 points. New England briefly built its lead to 18 — but this one promises to be a closer game throughout. It might not translate into a win and a Super Bowl berth, but the Ravens have figured out how to keep Tom Brady off the field. The smart money is against Belichick’s Bullies posting a blowout victory. 150,000 jermajesties

Torrey Smith over 67.5 yards receiving vs. the Patriots

The great thing about this wager is you can win it after just one play. Smith torched Denver All-Pro corner Champ Bailey last week — to the point where you’d think Bailey borrowed comically high heels from Lady Gaga for the big game. Back in September, Smith burned Pats defensive backs Devin McCourty and Kyle Arrington (six catches for 127). This week, he’ll probably be lined up against free agent pick-up Aqib Talib, which is a little better for New England. Either way — the Patriots have given up a league-high 74 plays of 20 yards or more, which makes this prop more than inviting. 75,000 jermajesties

I don’t care if it’s Fouts vs. Marino — those odds are far too high for starting running backs to score first. Especially in this day and age, when the end zone pass-interference call is more predictable than a drunken Golden Globes acceptance speech. Bet this one and root for the cheap 1-yard plunge. 20,000 jermajesties each

Even: Odds that Falcons coach Mike is the Smith most likely to do something to blow the 49ers–Falcons game (Aldon 5/1, Justin 7/1, Alex 15/1)

The onside kick with the lead and eight seconds left is a head-scratcher. Laugh all you want, but there’s good value in Jada Pinkett at 350/1.

1/3: Odds that when all is said and done, the official cause of termination for Broncos defensive backs coach Ron Milus will be not being able to yell “What the f%$# are you idiots doing” loud enough to cornerback Tony Carter and safety Rahim Moore, who allowed Jacoby Jones to get behind them for the game-tying 70-yard touchdown in the final minute of regulation in last week’s Ravens upset win over the Broncos

I apologize for the run-on sentence. It’s just a shame a man has to lose his job because two pros suddenly forget how to play football.

Question: What can a legendary quarterback who miraculously led his team to the top seed in the playoffs after four neck surgeries do to prevent a 70-yard touchdown pass with less than a minute left?

Answer: Not a goddamn thing.

5/2: Odds that by the end of the year, Oprah gets Nicki Minaj to admit she wears a wig

If I’m Manti Te’o (and at this point, I might be) I force the authorities to investigate Lance Armstrong as the man behind this fake girlfriend hoax. Te’o’s scandal deflected 90 percent of the national spotlight away from Armstrong’s interview with Oprah. And I’m sure Lance had a ball with this hoax. Sorry, I had to.

750/1: Odds that Manti Te’o believes whichever team’s GM calls to inform him he’s been drafted into the NFL this April 25

Here’s how that call goes:

Buffalo Bills GM Buddy Nix: Hello, Manti. This is Buddy Nix — general manager of the Buffalo Bills. I just want to let you know that in a few minutes we’ll be drafting you with the 8th overall pick, and we couldn’t be happier.

Manti: Do you think I’m stupid? I’m not falling for this prank. Lose my number, jackhole. And don’t think I won’t trace this call.

Manti: I said eff off, creep!

Seriously, how does Manti Te’o believe anyone ever again? I put this story right up there with the Harding–Kerrigan incident as the most bizarre in sports history. That one’s still no. 1, if only for the name “Gillooly.”

Bryant, of course, missed the kick attempted during the timeout, but then made the one that counted, eliminating Carroll’s Seahawks from the playoffs. After the miss, Carroll appeared to claim that he didn’t call the timeout; he was actually looking for an unsportsmanlike conduct penalty on Falcons kicker Matt Bryant, who kicked the ball even after the timeout was called. Bryant did the right thing. If I hear the whistle blowing after an opposing coach calls timeout to ice me, I kick the ball right back into my center’s ass — and then make the opposing coach pay on the next kick. Icing a kicker is dumb. Kickers get paid to wait around for three hours for this moment. Another 45 seconds is not going to make a difference. Do you think if you told the 12-year-old spelling champ from Bangladesh that she would have to wait 45 seconds to spell the word “cymotrichous” it would faze her? No. Same same.

5/2: Odds that in 2013, I’ll appear in the Dawg Pound after the Browns hired my chums Alec Scheiner and Mike Lombardi to run the organization.

The Cowboys are one octogenarian hire away from forcing me to do this.

1/12 odds I will end up catching the flu after shooting this bit for Jimmy Kimmel Live (now seen in most places in this country at 11:35 p.m.), in which I pretended to give people the flu

You haven’t lived until you’ve fake sneezed on a stranger’s back. Please, do try this at home.

And that’s that. Enjoy the conference championships.