CourtVision: So This Is What Carmelo Anthony’s Prime Looks Like 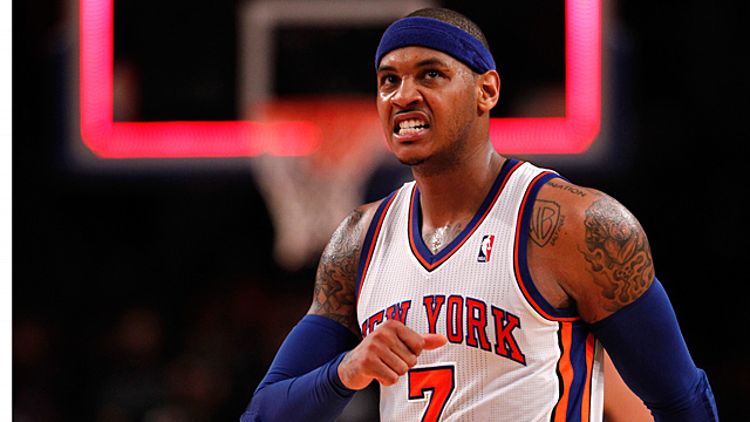 Despite their loss last night, the Knicks remain one of the hottest teams in the NBA. As we approach the conclusion of the regular season, New York has won 13 of 14 games, and has have established itself as the second-best team in the Eastern Conference. At the same time, Carmelo Anthony has established himself as the second-best player in the Eastern Conference.

Melo always has been a very active shooter, but he appears to be a different player this year than last; his shooting patterns have changed, and his efficiencies are way up. While Anthony deserves tons of credit for his recent scoring terror, it’s also a reminder of how important teammates and coaches are in the NBA. Simply put, Melo is in a better situation this season; he’s got better teammates, and as a result he’s taking better advantage of better scoring chances. 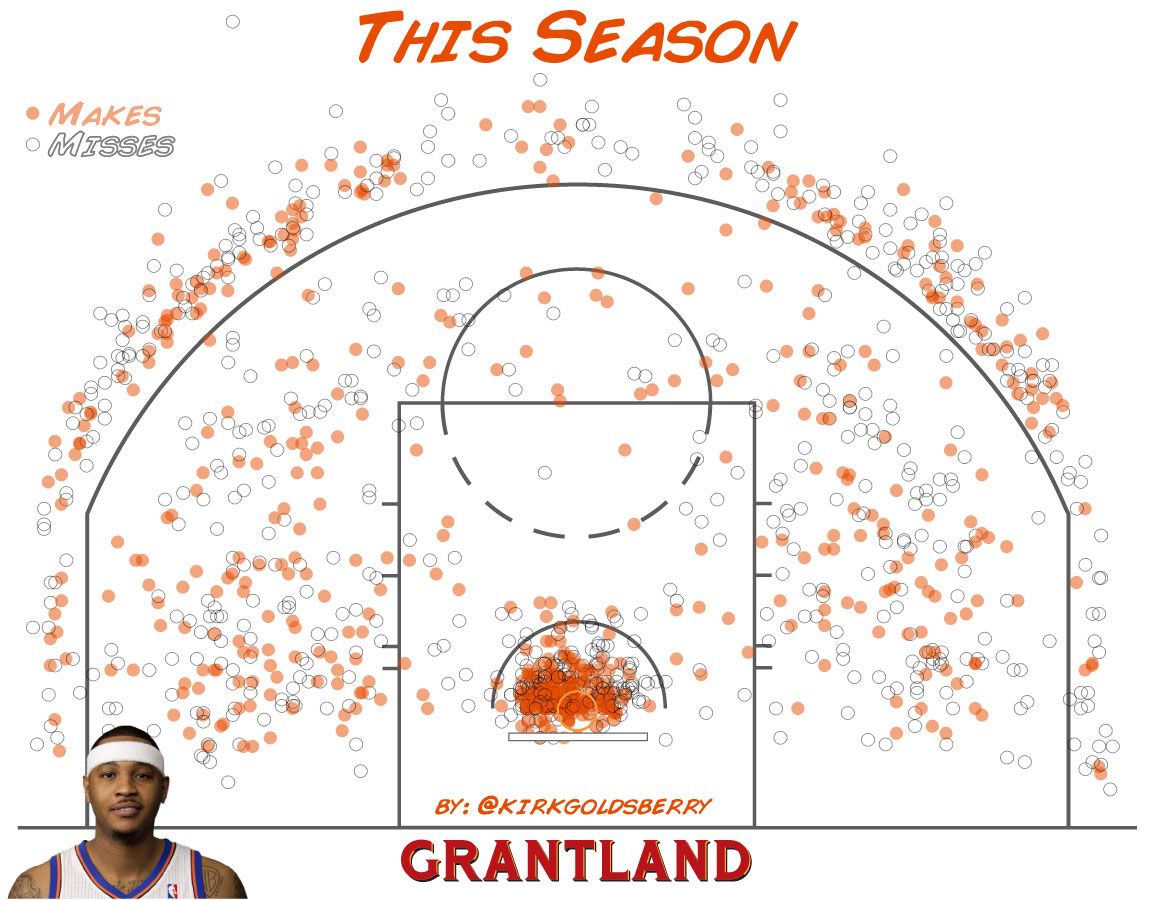 Lost in the offseason jokes about the advanced ages of all the new Knicks was the basic idea that the team completely overhauled its backcourt. Last year’s backcourt consisted of Jeremy Lin, Landry Fields, Toney Douglas, Mike Bibby, Iman Shumpert, and Baron Davis. With the exception of Lin, who was irrelevant for half of last season, those Knicks’ ball handlers didn’t make plays and didn’t open spaces for their teammates. As a result, Anthony was relegated to the right side of the court, and was relied upon to create his own shots; he was fairly inefficient. 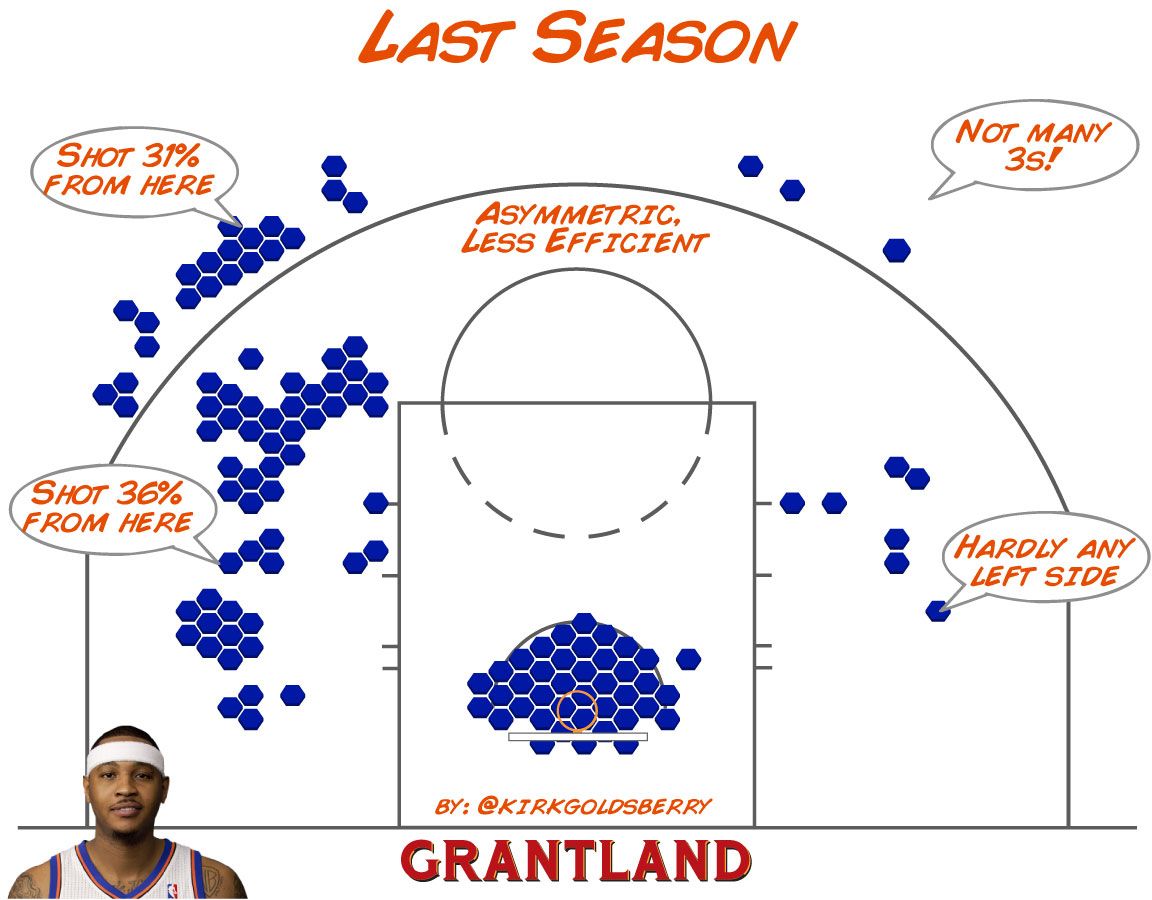 With the exception of Shumpert, all those guys are gone; they’ve been replaced with Raymond Felton, J.R. Smith (who played 35 games for the Knicks last season), Jason Kidd, and Pablo Prigioni. The new ecology of the Knicks has resulted in a healthier scoring environment for Anthony. Last season, opposing defenses were not nearly as threatened by the Knicks’ perimeter corps; the Knicks couldn’t decorate the 3-point line with intimidating shooters. This season they do just that. Not only have they greatly improved their team shooting from the perimeter, but Melo’s new backcourt teammates simply make better plays. In particular, Felton and Smith attack the paint and compromise the shape of the defense to create more open shooting options around the floor.

Consequently, Anthony is getting better looks, especially in catch-and-shoot situations, where he has become a deadly 3-point threat. Although he’s taking more jump shots this season, his jump shooting efficiency is way up. Where he was hitting at NBA averages last season, he is way above average this season. Additionally, from a spatial point of view, he’s a much more symmetric scorer, and he’s much more active behind the arc. 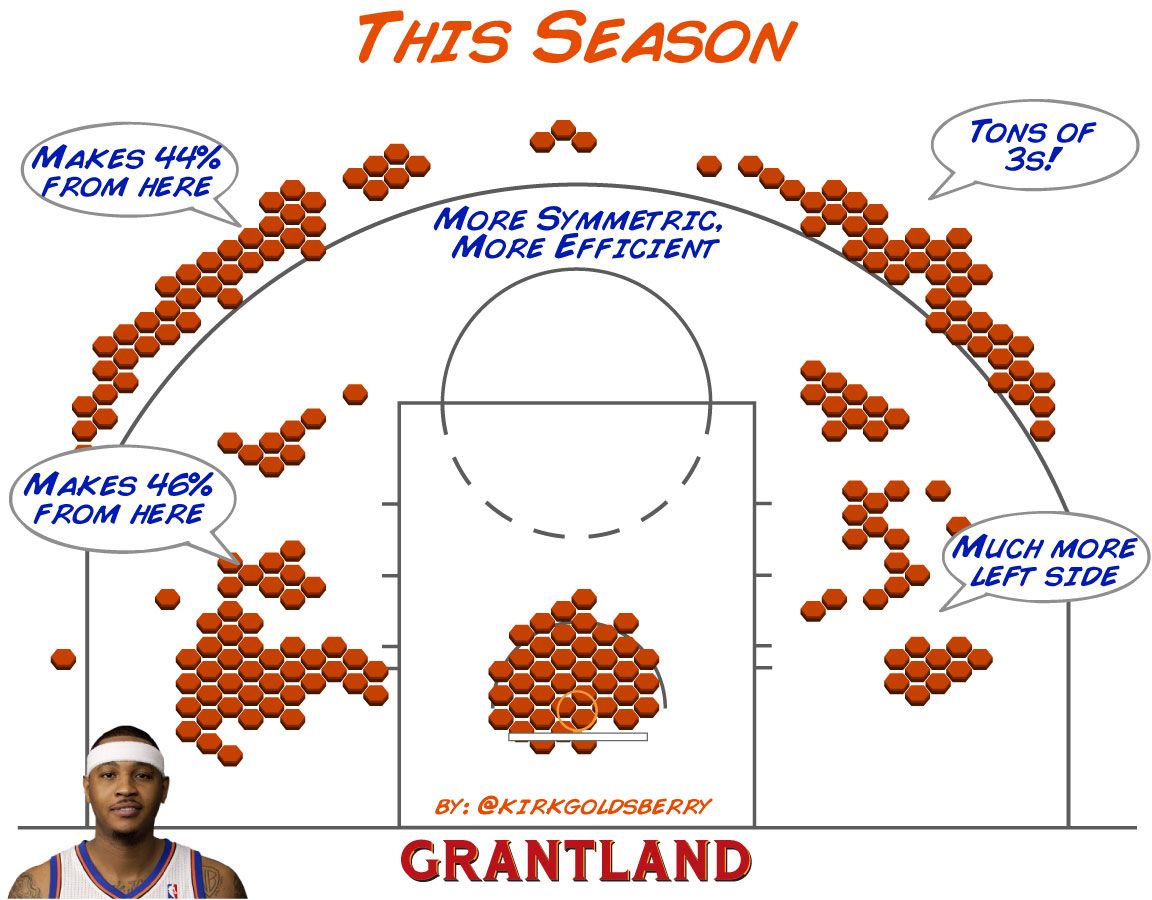 The differences from last season are stark. Anthony’s midrange game has migrated away from the elbows and a bit toward the baseline. But the big change is obviously beyond the arc. In terms of frequency, Melo has never been this active from 3-point range. Although many of us don’t think of Anthony as a high-volume perimeter shooter, only a tiny handful of NBA players are more active there. He’s averaging more than six attempts per game, among the most in the league.

Regardless of the reasons, the bottom line is that Melo is about to wrap up the best season of his career. This is his prime, and with a much-improved jump shot, and a more efficient scoring profile, he’s revealed himself to be a worthy NBA superstar. But Anthony’s improvements this year also provide us with a vital reminder of the importance of context in the NBA. It helps to share the floor with playmakers, and good guard play makes everyone better.