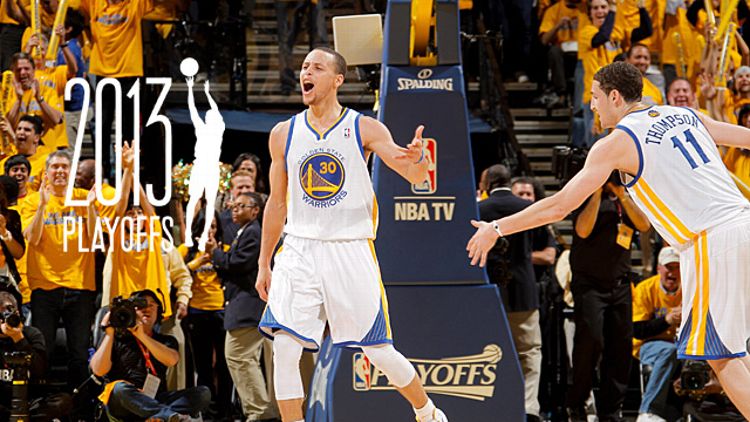 The first reason I like Steph Curry is that he’s a relatively normally sized human being who has figured out a way to become an NBA superstar. When you look at guys like Dwight Howard, LeBron James, or Dirk Nowitzki, it’s easy to see why they might be incredible basketball players. Stephen Curry doesn’t look like those guys; someone with his exact figure could walk into any pickup gym in America and few people would notice. Curry is skinny and shortish by NBA standards, but pound-for-pound he is probably the best scorer the league has seen since Allen Iverson.

It’s Curry’s tiny frame and the current NBA injury plague that make what happened the other night in Denver more bothersome. Kenneth “Manimal” Faried stuck out his foot, in what was possibly an attempt to trip Curry, who could easily be nicknamed “beanpole.” I love Faried as much as anyone but was repulsed to see him resort to that. To me it seemed out of character and dickish (or malicious), which is a word I would never use to describe Faried or his game. Why would he resort to tripping? Those saying fouls like that are part of the game neglect to mention that this exact move could easily start a fight at any level of basketball. Tripping is never part of the game and it never should be.

A lot of people have argued, “Well, this is playoff basketball and hard fouls are the norm.” They cite the Pistons beating up Michael Jordan as an example. They imply that there’s some old-school cred associated with this stuff. There’s not, and thank god the days of clotheslining are bygone. Hurting dudes who make the NBA fun to watch is not cool now, and it never really was. If you want to watch big guys fight each other, there’s a sport for you, but it’s not basketball. There is no dignity in “touching up”; there should be no pride in substituting brutality for skill. And though it’s an argument for another time, you’ll find many of the same people who embrace the notion of hard gymnasium fouls on Friday preaching about the importance of player safety in other sports on Sundays.

Imagine a parallel world in which Curry had fallen down and hurt one of his fragile ankles — I don’t think that’s an implausible scenario. Imagine the backlash at Faried. Imagine the PTI segment; Kornheiser would be aghast. Imagine the First Take segments; Bayless would be apoplectic. My argument is that once Faried stuck that big yellow Adidas out in front of Curry, he chose to enter a realm where such an injury became a realistic possibility. He didn’t know the outcome of his action, but he certainly knew the possibilities, and it’s not a stretch to suggest he knows Curry’s injury history as well.

On the long list of people who are thankful that Curry didn’t get hurt, Kenneth Faried should be very close to the top.

There’s another reason I like Steph Curry: He’s an incredible shooter. In fact he may be the best in the world at converting jump shot opportunities into points. To borrow a concept from the legendary Bob Ryan, if the aliens came down and challenged humanity with a winner-take-all game of H-O-R-S-E, of all the current NBA players I would definitely nominate Stephen Curry to be our representative in that game. Curry’s shot chart reflects this greatness; he puts up stellar numbers virtually everywhere along the perimeter. 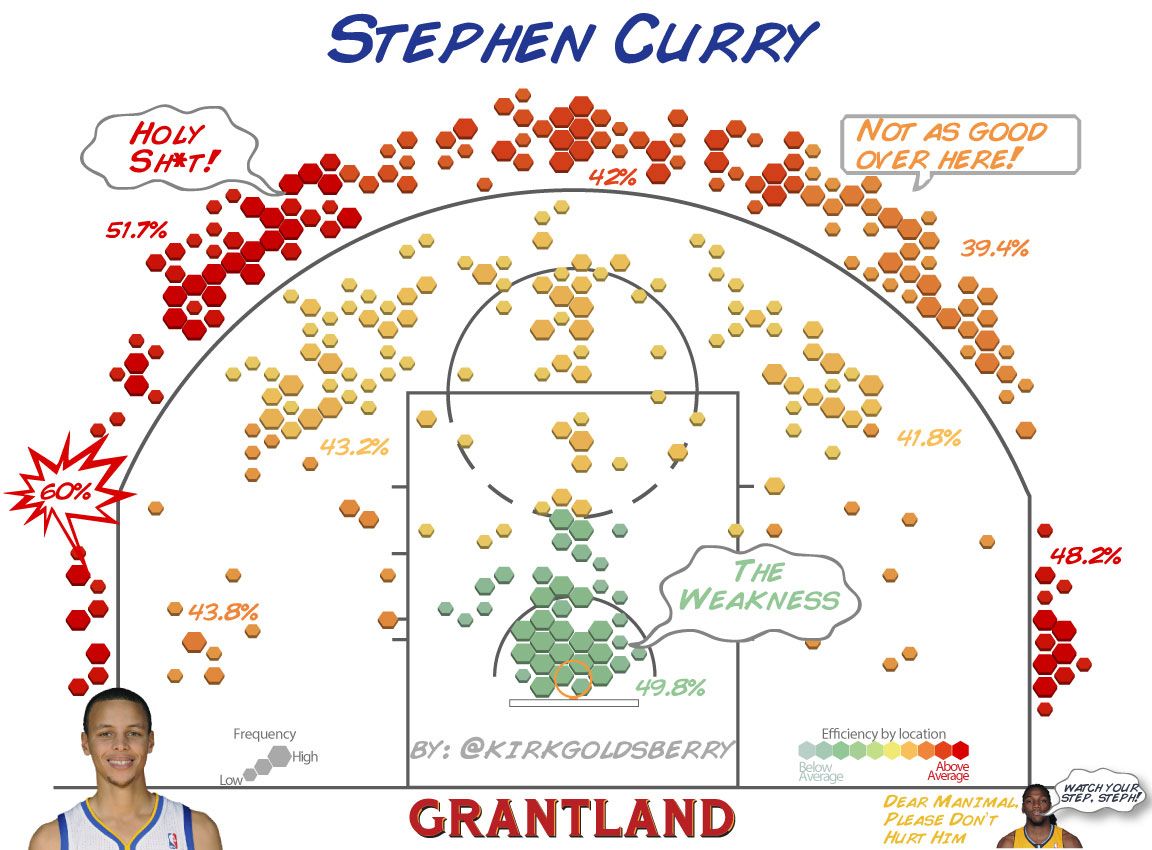 Unsurprisingly, Curry outperforms NBA averages at every spot beyond the arc. He’s incredibly effective in the corners and along the right wing (graphic left); it’s probably safe to say that he’s the best 3-point shooter in the league. After all, he did break Ray Allen’s record for 3-point field goals made in a season this year. However, relative to league averages, Curry’s efficiency drops the closer he gets to the rim. That’s not to say he’s not very good in the midrange — he is, but he’s definitely not the best midrange shooter in the league. He hits long 2s at a lower rate than bigger guys like Chris Bosh. Both Bosh and Curry take about five shots between 16 and 23 feet each game, but Bosh makes 53 percent while Curry makes only 44 percent. Curry has a bit of trouble scoring around bigger defenders, and it’s this effect that exposes the biggest shortcoming in Curry’s offensive game.

If there’s a clear weakness in Curry’s offensive portfolio it’s scoring the basketball down low in the land of giants. In the era of so-called “attack guards” or “power guards,” Curry doesn’t quite fit in. He doesn’t get to the rim as much as the league’s other All-Star guards. With the exception of the pure point guard Chris Paul, all nine All-Star guards this year attempted at least four shots per game at the rim. Stephen Curry attempted only 2.1 shots per game at the rim. Relative to his elite peer group — which includes guys like James Harden and Russell Westbrook — he lacks the size and the power to effectively attack the basket. That said, he’s not Austin Rivers, and when he gets to the basket he’s not terrible. Regardless, nobody watches Steph Curry to see him attack; we watch him because he is one of the top jump shooters the league has ever seen, a fact not lost on Mark Jackson. 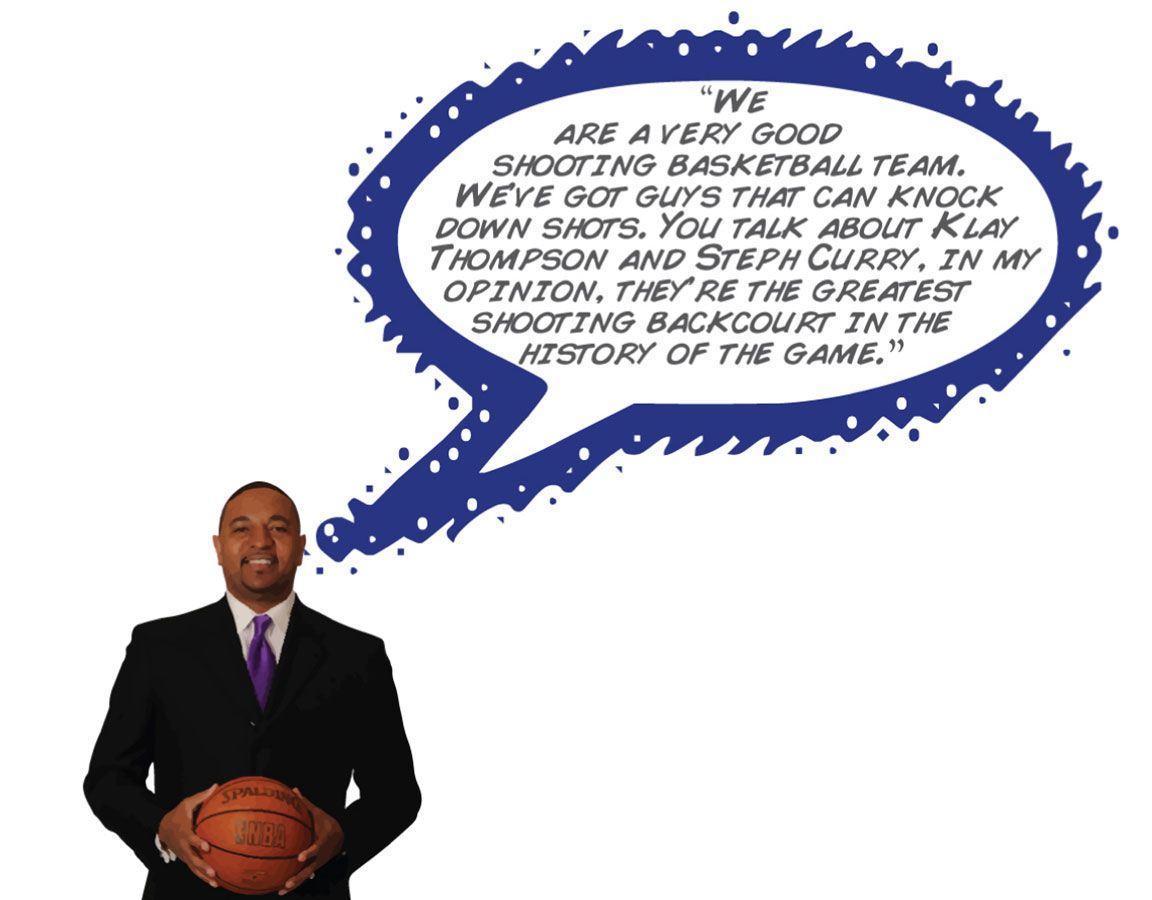 Last week, after the Warriors hung 131 points on the Nuggets in Game 2, shooting 65 percent from the floor, Jackson hyped the shooting prowess of his backcourt. He went so far as to say his team possessed the best shooting backcourt ever. That’s obviously a bold claim, but might not be so outlandish. Together with Klay Thompson, the Warriors decorate the perimeter with a terrifying amount of efficiency. Although Thompson isn’t on the same level as Curry, he provides a suitable Robin to Curry’s Batman. 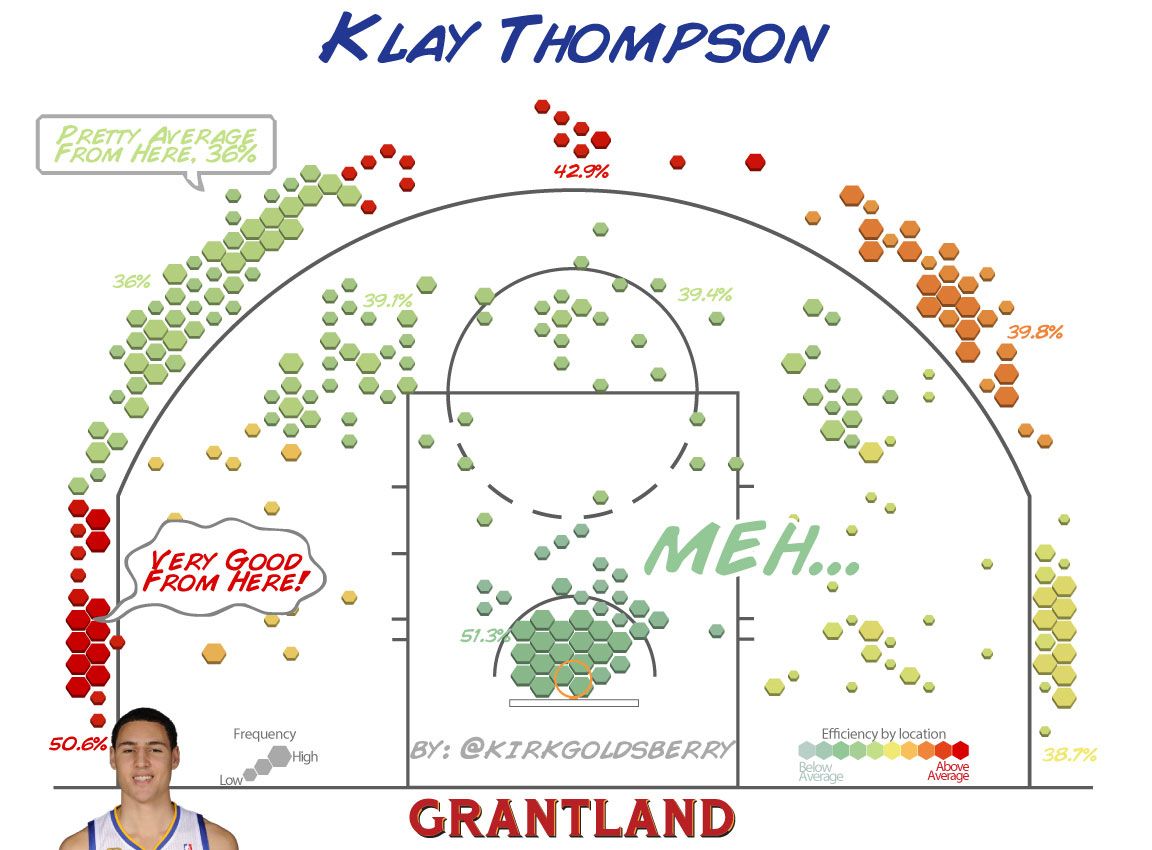 Like Curry, Thompson is particularly good from the right corner, where he made 50 percent of his shots this year. However, away from the right corner, Thompson is a run-of-the-mill good 3-point shooter; he ranked 31st in 3-point shooting efficiency this season behind players like Nate Robinson, Randy Foye, and LeBron James. Don’t get me wrong, he’s good, but he’s not Steph Curry. Either way, Jackson’s quote about his backcourt is emblematic of a larger problem in contemporary basketball discourse. Too often we let the “best ever” be the enemy of the “great” — there’s no question that along with Jarrett Jack, Thompson and Curry are freakishly great at shooting the basketball. However, when we throw around “best ever” — and we do a lot these days — we immediately provoke an argument. Instead of simply appreciating these guys for being great, we are thrust into pointless debates about Gail Goodrich, Jerry West, Raja Bell, and Steve Nash. Next thing you know we’re not appreciating greatness anymore and we find ourselves deep down in the Gail Goodrich YouTube rabbit hole. Don’t do it, you guys.

Digressions aside, the Warriors are really fun to watch, especially on offense, where Curry has evolved into the kind of elite scoring talent that many scouts doubted he could become. Further, the coaching staff has created sets that effectively provide their excellent shooting guards with excellent opportunities. Their “elevator doors” play for Curry is probably the best example of this, and a thrilling bit of playbook craftiness. Going forward, helping Curry get shots and keeping him healthy remain key to the Warriors’ success. If the last few weeks of basketball have taught us anything, keeping guys healthy and on the floor is hard enough in this league, and the last thing we need are dirty little plays that only elevate the risk of losing another superstar.