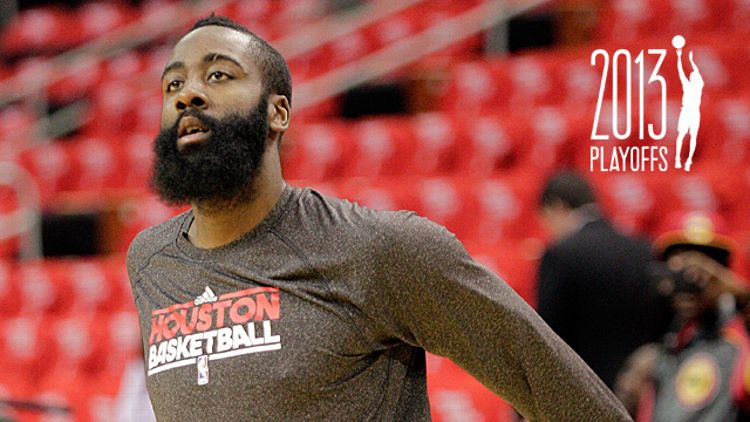 The October trade that sent James Harden from Oklahoma to Texas has been dissected a thousand times by a thousand people. However, the trade is particularly relevant again today; 87 games later, Harden is leading his Rockets squad to a potential upset over his former team. Sure, the Westbrook injury changed the series — and the entire Western Conference playoffs, for that matter — but an upset in this series would still be a huge moment for Harden and the Rockets.

While it’s obvious that Harden has made the Rockets a better basketball team, it’s also important to recall that eight months ago we had little idea how Harden would react to his new environment. After a few years in OKC, we knew he could be Ginobili, but it was unclear whether he could be Parker or Duncan. Though it was apparent that Harden would be the primary scorer for his new team and his volume would surge, it was anybody’s guess as to how he’d perform.

Well, the volume surged, and he’s performed extremely well. He took 17 shots a game this season after only attempting 10 per game last year. He’s also proven that he is a superstar-level player who deserves a max contract, and he’s got one of the more interesting and unique games in the league.

There are two defining characteristics of Harden’s offensive game: 3-point shooting and attacking the basket on dribble drives. He uses midrange shots about as much as he uses Barbasol (he’s got a giant beard). He’s an above-average 3-point shooter who can knock down shots in both off-the-dribble and catch-and-shoot situations. Overall, he made 38 percent of his attempts from beyond the arc this season, but a vast majority of his activity was concentrated at the top of the arc and along the right wing, where he attempted over 350 shots this season. 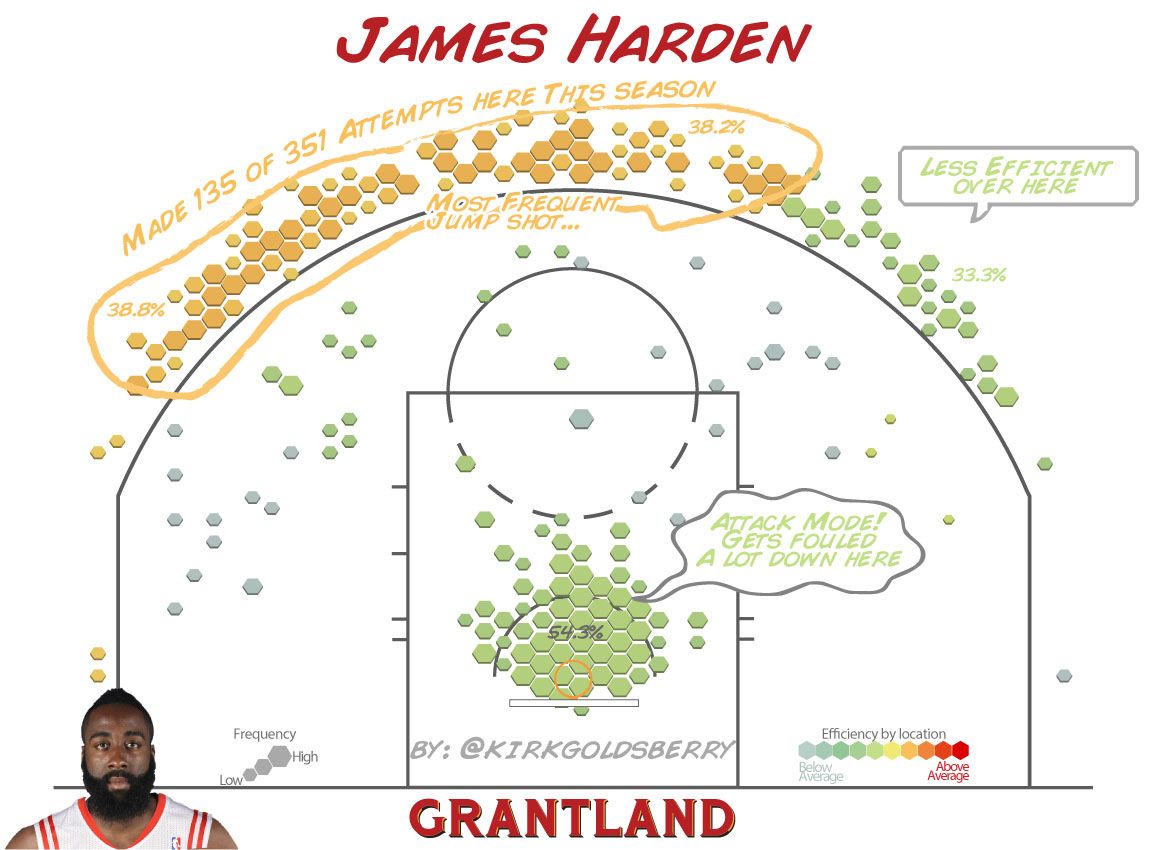 Only five players made more 3s than Harden this season, but that isn’t even the defining part of his game. Harden’s ability to make these 3-point shots opens up the court for the other vital aspect of his game. Using a blend of quickness, power, balance and eurosteps, Harden is among the best players in the league at using his dribble to commute from the perimeter to the basket. He’s the best attacking guard in the NBA.

As Zach Lowe described in February, not only is Harden among the league leaders in “drives per game,” but a James Harden drive is one of the most efficient point-producing plays in the entire NBA. As of February, the Rockets averaged a staggering 1.51 points per possession when he drove to the basket. This efficiency is the sum result of four abilities: (1) transporting the ball to the basket area from the perimeter, (2) not turning it over in the process, (3) making shots among bigger players, and (4) drawing fouls.

It’s this fourth key element of Harden’s game that fails to appear on his shot chart. His attacking nature not only results in closer shots, but perhaps equally as important, it also creates tons of free throws. In fact, Harden led the NBA in free throw attempts this season; he was the only player in the league that went to the line over 10 times per game. And as an 85 percent free throw shooter, this means Harden scores over eight points per game from the line. At 23, the combination of his 3-point shooting, attacking, and free throws is already presenting opponents with a cruel pick-your-poison dilemma that will likely only become more deadly over the next five years.

While it’s tempting to give Harden full credit for Houston’s reentry into the playoffs, that sells short the roles of his coaches and teammates (and Daryl Morey). For example, the rapid emergence of Chandler Parsons has been both faster and more dramatic than most anyone expected. Although some predicted that the Harden-Lin backcourt would lead the scoring charge for this year’s Rockets, it’s been Parsons who has elevated his game to become the team’s second-leading scorer. And his ascension is among the most important developments of these playoffs. 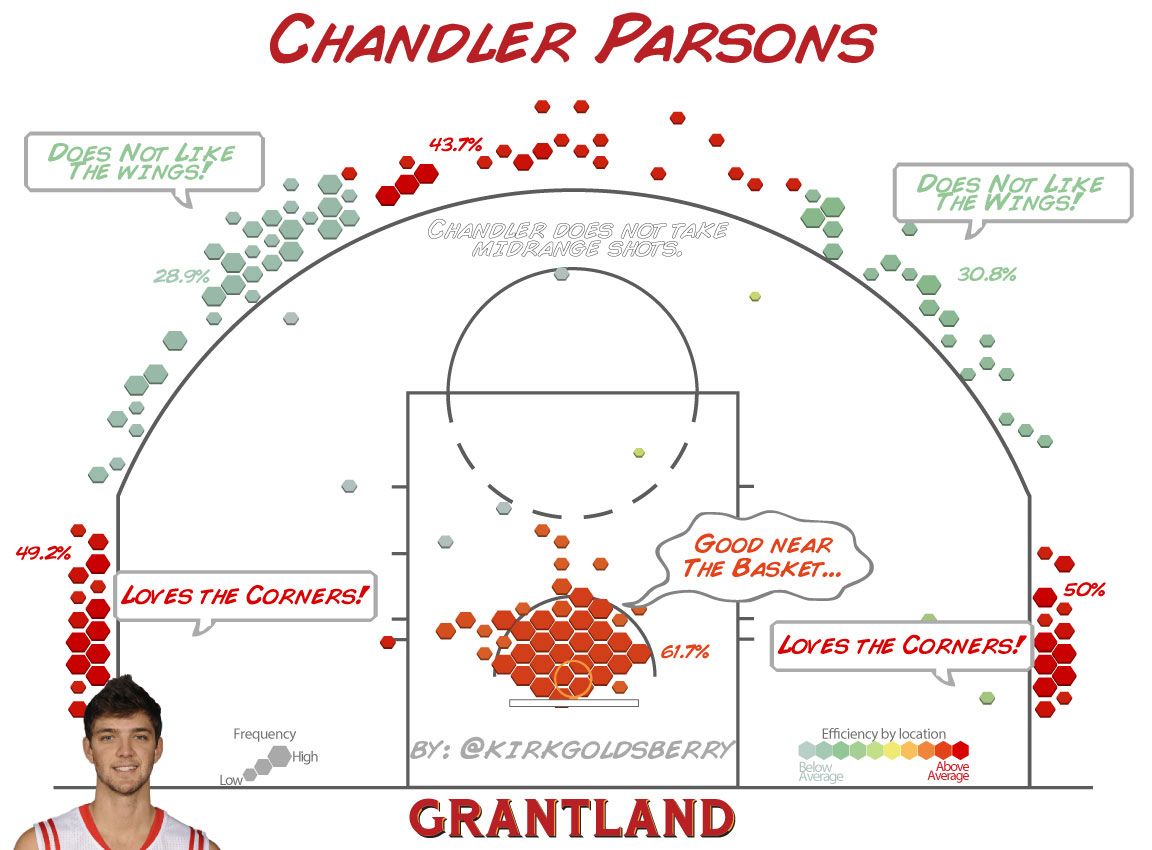 Parsons has one of the NBA’s most interesting shooting profiles. Like Harden, he hates midrange shots, possessing a video-game-shot chart: all 3s, layups, and dunks. His 3-point shooting efficiency is highly spatially dependent: He’s great from the corners, but pretty bad from the wings. In fact he made almost half of his corner 3s this season, but less than 30 percent of his wing 3s. His shooting has certainly improved since last year, but nowhere is that more apparent than at the free throw line. Last season, Parsons made only 55 percent of his free throws. That embarrassing number has climbed to a respectable 72 percent this season.

Even if the Rockets’ season ends tonight, it has to be considered a huge success, especially given where this team was a year ago and where it might go this summer. The current roster includes enough solid young talent to make almost any other team envious, and the Rockets also have that delicious cap room to use this summer. Maybe they can get someone else who needs to improve their free throw shooting.