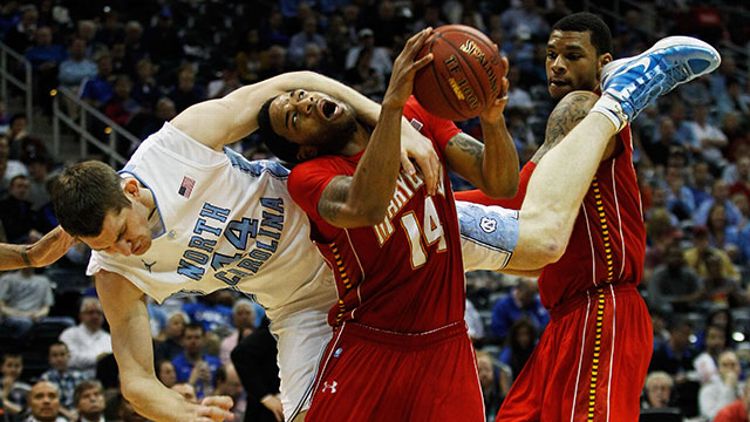 Last May, the NCAA Men’s Basketball Rules Committee met with a chance to rescue college basketball from its ongoing doldrums. The aesthetic quality of the sport had hit rock bottom, with scoring dropping to its lowest levels since the 1951-52 season, according to the NCAA record book (page 44 [PDF]). An NCAA press release, and subsequent media reports, highlight the 1981-82 season, which was the previous low point since the 1950s.

Our pals at StatSheet have documented the decline in everything from shooting percentage to scoring to free throws attempted to possessions, and every chart tells the same story. Games were longer, too, and the style of play was slow and plodding compared to the NBA. In essence, athleticism and pace had been ground to dust under the jackboot of physical defense and control-freak coaches. Individuality, which makes basketball such a free-flowing, exciting sport, was systematically squelched.

The committee meets once every two years, and it had the chance to shorten the shot clock (this is my personal hobbyhorse, by the way, starting in 2012 … it’s like Al Gore with global warming, except the shot clock issue is more important), cut down on brutish defense, kill the excessive timeouts that dragged games out to interminable lengths, adjust the block/charge rule, and maybe do something radical about the intentional fouls.

Of those, they only changed the block/charge rule, mandating that a defensive player now has to have both feet set before the offensive player leaves the floor for a layup or dunk. The bigger problems were ignored, and the committee actually increased the amount of replay stoppages we’ll see in games. It failed the sport, I thought, and doomed college basketball to two more years of an ongoing stylistic nightmare. I got myself all in an Internet lather, and I think I was justified.

Turns out, though, I didn’t know the whole story. In what seemed like a minor procedural move (and one that was hugely underreported), the committee also proposed an edict that would force officials to change the way they called fouls in order to “allow for more offensive freedom” and “enhance the balance between offense and defense.” The organization’s Rules Oversight Panel (seriously, I’m sorry for dragging you so deep into the NCAA bureaucracy) approved the edict a month later and released a statement that, if consistently forced, is going to change the game forever. In the panel’s words:

The following types of personal fouls should be called consistently:

• When a defensive player puts two hands on an opponent

This is not a “rule change,” per se, which is why nobody picked up on it back in May. It’s just a notice to officials across the country to start calling the rules as they’re written. This won’t stop you from hearing that there are new rules time and again this season, but consider yourself forewarned.

And while the adjustment may have slipped under the radar in May and June, believe me, it’s front and center now. Oklahoma State coach Travis Ford called it the game’s biggest change since the 3-point line. In an exhibition game between Louisville and Kentucky Wesleyan, 64 fouls were called in a game that took two and a half hours (this is at least a little ironic, since Rick Pitino called for this at last year’s Final Four). And some coaches, like West Virginia’s Bob Huggins, aren’t pleased. “They don’t want a great 57-52 game, hard played, competitive,” he told USA Today. “They want an 86-82 game. Do they want to watch that garbage for four-and-a-half hours? Do they want to do that by shooting 70 free throws?”

This is what I mean by growing pains. The sport needed a change in the worst way, but the rough, hands-on style of defense has been so completely ingrained in college players and coaches that there could be a very ugly transition period before teams adjust. If the referees are consistent (and let’s pray that they are, for the sake of the sport’s future), they will have to crack down on coaches who insist on testing them. Some games will be foul fests. Coaches will complain, and the pressure will mount from ignorant fans who buy in to the propaganda that we’re “sissifying” the sport (that article is a strong example of the hot takes you’ll see from those opposed to the rule change). There will be hysterical prophets of doom who say that every Division I team will be playing zone defense within a year. Patience will be stretched thin, and there may even be a clamor to return to the old ways.

And then, if the referees are steadfast and the NCAA doesn’t cave, coaches will adjust. And the game will be miles better.

The biggest distortion you’ll hear is that the rule change takes away college basketball’s essence. For whatever reason, sports debates love to take on the qualities of political debates, meaning often issues are framed within the progressive vs. conservative paradigm. And so some pundits and fans will argue that it’s changing the game fundamentally to cater toward a New Age mentality where men aren’t men and the nanny state is cracking down on physicality.

In this case, it’s nonsense. Watch any of the YouTube clips from the 1984 regional semifinal between Indiana and North Carolina (the night Dakich “stopped” Jordan), and you’ll see that the rule change is actually a return to a style that had been abandoned sometime in the ’90s as the college game turned to a more stifling model. It’s progressive and conservative at the same time. Really, watch those clips, and note the freedom of movement not just in one-on-one situations, but as players move off the ball. There are no violent arm bars and nobody is forcibly pushing anyone into double-teams or using two hands to stop forward progress. It’s basketball, and it’s great.

You’ll notice, by the way, that the coaches who complain tend to fall into one of two categories: They either play slow-tempo basketball or their defenses are better than their offense. Last year, Huggins’s Mountaineers were 235th in adjusted pace. Larry Eustachy at Colorado State was nearly as low at 218. Bill Self, another member of the vocal opposition, had the fifth-best defense in the country, but only the 34th-best offense (this ratio has been roughly the same in eight of the last 11 seasons). Oklahoma State was 15th and 68th, respectively. It’s the same at Iowa, where Fran McCaffery’s team was 22nd and 51st. Matt Painter’s Purdue teams are famous for their ball-hawking defense, and the list goes on and on.

As with anything new and important, an entrenched opposition emerges, and the loudest complaints will always come from those with the most to lose. Sympathize with the counterrevolutionaries if you want, but let it stop at sympathy, because the onus will be on fans and media alike to keep our eyes on the prize. And this process is not unprecedented in American basketball. Iowa State coach Fred Hoiberg is in a unique position to comment, because he was in the NBA when the league underwent the same exact transition.

“It was pretty ugly at first,” he said. “I remember some of the games would take over three hours just because of all the fouls that were called. But I like the freedom of movement idea. I think it will be great for the game.”

This is an important moment in college basketball, and everything depends on the consistency and resolve of the referees. It’s not too dramatic to say the game’s future hangs in the balance. Will we see a return of the midrange game and an emphasis on athleticism and individual brilliance, or a sport slipping backward into the quagmire of physicality? The NCAA took a huge step in the right direction, and all that’s left is to endure the growing pains.