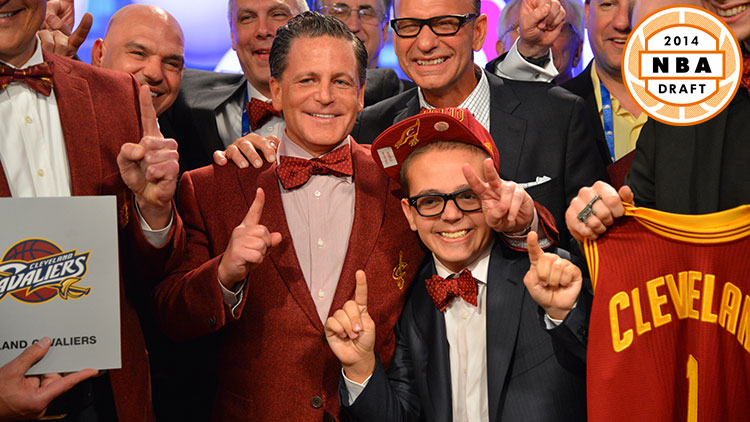 OK. We’re about 24 hours away from the NBA draft, and more than any draft I can remember, everyone’s clueless. There are trade rumors involving every team in the top five, two different players could go no. 1, and then, on the periphery, you have superstars like Kevin Love and Carmelo Anthony available and about to switch teams.

Oh, and LeBron James is about to be a free agent.

It’s a mess. It’s great. It’s made this whole week so much more fun than anyone expected.

But the whole time, there’s been one team at the center of everything. The center where the jet set swing with Hepper cats, shop at Higbee’s, then go hit the flats. New York and Paris just don’t have the sights you’ll see on Euclid Ave. It’s time to talk Cleveland.

Draft week is crazy across the board, but nothing’s crazier than what’s happening in Cleveland. It started last spring, really. That’s when Dan Gilbert and Chris Grant hired Mike Brown for a second time, a move that was so amazing at the time it sort of defied any comedy. You couldn’t come up with a better joke than the Cavs doubling down on Mike Brown. Then they won the lottery for the second time in three years. Then came the draft, and things got even more ridiculous when they shocked everyone and took Anthony Bennett no. 1 overall.

At the time, I wrote: “Maybe Bennett will live up to whatever hype convinced the Cavs to do this, but he’s undersized, currently 18 pounds overweight, and will probably be a liability on D for his entire career. As Brill once told Robert Clayton Dean … Chris Grant, you’re either incredibly smart, or incredibly stupid.”

We know how that worked out.

But then, the craziest thing of all: All of that stupidity set the Cavs up perfectly. They sputtered away any playoff chances in the worst Eastern Conference we’ve seen in at least a decade, the failures allowed them to get rid of Brown and Grant, and somehow they won the lottery AGAIN. They also had an $80 million offer turned down by John Calipari, winding up with a coach who probably projects much better than Calipari in the NBA.

Now we’re watching the Cavs at a crossroads. They’ve got the no. 1 pick and a fistful of trade offers to choose from, LeBron’s available this summer, they’re about to sign Kyrie Irving to a max deal, and they just hired David Blatt. Imagine how stressful this must be for Cavs fans. This team could contend for the next five years if it plays things right, or it could Cleveland things up all over again, and we’ll look back on this week as one more nightmare in a city that has made tragedy an art form.

Already, we’ve seen Jabari Parker tanking workouts to bypass Cleveland for Milwaukee. That sentence is amazing enough by itself. But the Cavs still want to draft him! As Chad Ford reports:

The majority of the Cavs’ front office — including new general manager David Griffin — is leaning toward selecting Parker, sources said. Parker came in for a workout and was less than stellar, appearing out of shape and even disinterested. Sources told ESPN.com that the former Duke forward prefers to play [for the] Milwaukee Bucks, which is closer to his Chicago home and also a spot in which he can be featured as a go-to player.

… Sources said that it’s still unclear whether Gilbert will overrule Griffin and the Cavs’ front office — as was the case when he offered Kentucky coach John Calipari the coaching job prior to hiring David Blatt.

Others in Cleveland echo those sentiments.

Who even knows? The Cavs also have trade options for the pick, and that might be the best course of action. If I were running things in Cleveland, I’d trade the no. 1 for at least a year of Kevin Love. Worst-case scenario, he dominates the East for a year and turns down more money to go somewhere else. Best-case scenario, he becomes bait to lure LeBron back home and contend for titles for the next five years. Love says he won’t re-sign in Cleveland, but if LeBron showed up, everything changes.

Speaking of which … A lot of people think LeBron would never go back to play for Gilbert. That makes sense. But then others — like Grantland’s official NBA scout whisperer Ryen Russillo — say that part is overblown. If the Gilbert stuff isn’t as big of an issue as we think, I’m not sure why people think it’s that crazy for LeBron to end up in Cleveland. Even if there’s only a 30 percent chance LeBron actually leaves this summer, it’d make the most sense for him to stay in the East, in which case the Cavs are right there with the Bulls as the best fit. And wouldn’t going home to Cleveland make more sense than playing next to Derrick Rose in MJ’s shadow in Chicago? It’s one thing for the Cavs to bank everything on this scenario, but they’d be crazy not to consider it at all.

There are also reported offers from Orlando (4, 12, and Arron Afflalo) and Utah (5 and Derrick Favors), both of which make a lot of sense, especially if Cleveland’s looking to add another star in free agency. They could draft Noah Vonleh and someone like Nik Stauskas at 4 and 12, or add Favors and someone like Aaron Gordon with Utah’s deal. Either one of those scenarios is probably better than rolling the dice with Wiggins, or taking Parker and trying to play him at the 3.

Nobody knows what they’ll do from here, and aside from the gospel of @cavsdan, it sure sounds like even the Cavs can’t decide exactly what they want. Ordinarily we could count on them to screw this up, but I don’t even know anymore.

Somehow the Cavs have gotten everything wrong for the past 12 months and accidentally played things perfectly. Whether it was striking out on Calipari and lucking into Blatt, or pissing away the season and landing at the top of the lottery again, it keeps working out. Maybe this is a new tradition in Cleveland? The Browns fired their coach and the entire front office this winter and were taking draft advice from homeless people, but they still hired a good coach, drafted a potentially great cornerback, and landed Johnny Manziel after a three-hour roller coaster ride on draft night. Wouldn’t it be amazing if all the stupidity with the Cavs somehow added up to LeBron, Aaron Gordon, and Favors around Irving? Even without LeBron, there’s still a chance to solidify this roster for the next five years.

Or, you know: They could draft Parker, ask him to play the 3, and trot out Irving, Dion Waiters, Parker, and Bennett, and give us one of the most depressing lineups in the NBA.

We’ll see. There’s no team with more to gain Thursday night, and nobody with more to lose. Like I said, terrifying. If you know a basketball fan from Cleveland, go give him or her a hug and say everything’s gonna be OK. We’ll all get through this together.