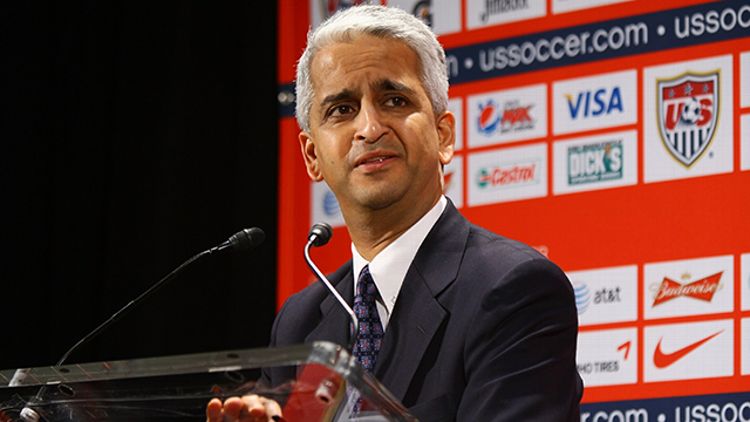 Somewhere in Panama City on April 19, Sunil Gulati won an election by a single vote. A representative from the tiny British territory Anguilla (FIFA rank: 206) broke a 17-17 deadlock, giving the United States Soccer Federation president a slim victory over Mexico’s Justino Compean. As a result, Gulati earned a four-year term on FIFA’s 25-person Executive Committee, the most powerful group in the soccer universe. He replaces Chuck Blazer, an American who declined to seek reelection, is facing a possible FBI and IRS probe relating to fraudulent behavior, and was recently suspended by the powers that be at FIFA. (Blazer also has a rather hilarious blog called Travels with Chuck.)

For Gulati, 53, landing on the ExCo, as it’s called, represents the pinnacle of a lifetime spent in and around the game. He was born in Allahabad, India, but immigrated with his family to Connecticut as a child and first joined the USSF in the late 1980s while working at the World Bank. He had stints with Major League Soccer and the New England Revolution before succeeding Bob Contiguglia as USSF president in 2006. In 2010, he ran unopposed and won another four-year term. He’s up for reelection in 2014 if he chooses to run again. Gulati — who is not paid by the USSF and is a senior lecturer in the Columbia University economics department — is the best-known American in FIFA not named Blazer, serving as a member of the powerful ticketing committee and on the independent governance committee that was established 18 months ago.

The ExCo is a group massively in need of cleaning up. Since October 2010, more than 10 of its members have been accused of some type of corruption. Gulati is saying all the right things, including expressing his desire for FIFA to disclose the notoriously secret compensation of its directors. But the question is how much impact the American can have. I asked Grant Wahl, Sports Illustrated’s soccer writer who drew attention to corruption within FIFA with his 2011 presidential campaign, for his thoughts.

“Sunil clearly chose to work within the system. That’s why he’s on the reform committee. He’s chosen that instead of publicly shaming FIFA for a lot of the corruption that has happened over the years and has taken down so many of the members of the Executive Committee,” he said. “Sunil could have abstained from voting for Sepp Blatter in 2011 just as England did, but he chose not to. He chose to vote with Blatter, and I think Blatter repaid that by putting Sunil in a very good position.”

While Gulati’s desire to reform FIFA appears genuine, it’s simply not possible to fix all that ails the organization while Blatter, the man who has been in charge since 1998, remains on top.

Andrew Jennings, a Scottish investigative reporter and one of the leading figures in tracking FIFA corruption, has further concerns about the USSF president. In a long post, he outlines how Blazer and former CONCACAF president Jack Warner defrauded Australia and other nations, and argues that Gulati, the Columbia economist, should have been able to see evidence of the fraud while looking at the confederation’s balance sheets. Jennings, who has an air of conspiracy theorist about him but boasts an impressive background in investigating FIFA, has a point.

He also raises another good question about Gulati’s statement that he would reveal compensation only if allowed to do so by FIFA’s laws: “[Why can’t] Little Sunil say to FIFA, ‘Listen you jerks, I’ve been elected from my continental region and I’m going to tell them how much I’m making’?” (Later in our conversation, the outspoken and outraged Jennings added, “Who the fuck are these toe rags in Switzerland to tell a proud American what information he can give to the American people?”)

At the time of his election, Gulati deferred to the inner workings of FIFA. “In a U.S.-based setup or non-profit, it’s not a recommendation or a norm, it’s the law that we have to disclose compensation levels of our top employees and outside contractors,” he said. “That’s not the norm in Europe, or most of the rest of the world, certainly in Switzerland … There are any number of other areas where our legal system, our history and culture, are different than other places, so it’s not easy.”

But perhaps the new ExCo member should have more power within soccer’s governing body. While the U.S. doesn’t have the strongest soccer tradition, it does represent a large piece of the economic pie. And at FIFA, money is everything. “Being an American isn’t a negative,” Soccer By Ives’s Ives Galarcep says. “The U.S. still carries clout with big TV deals.”

Wahl agrees. “I would argue that Gulati should have more leverage than he sometimes says he does because of the sheer amount of money that comes in from American television companies and official FIFA products,” he says. “The $1.1 billion for the [World Cup] television contract alone is more than any other country in the world.”

One thing is clear: The longer Gulati stays around, the more influence he’ll have. In addition to reform, he will attempt to accomplish two things. One is securing a fourth World Cup slot for CONCACAF, something that depends more on good results from the squads playing in the 2014 tournament than executive-level posturing. The second is another World Cup in the United States. The Gulati-led American bid to host in 2022 failed, stolen by Qatar’s unbuilt air-conditioned stadiums and other accoutrements. A 2026 bid is a real possibility and the USSF president will hope to use his growing influence in FIFA to help. But can he succeed where he failed before?

“[The World Cup is] the holy grail that he’s always pushed for but he’s never gotten. That was the big thing, the reason he put up with so much nonsense over the years in trying to lobby FIFA voters, and it didn’t work,” Wahl says. “It does leave you wondering what can he get.”

Gulati’s first major meeting as a member of the ExCo takes place at the end of the month at the FIFA Congress in Mauritius. The occasion marks the next chapter of Sunil Gulati, International Man of Soccer. The USSF and the American program is better for having the professor on its side, and his has been an impressive ascent up the FIFA rankings. We will see what comes next.

“He knows how to play the game. He’s a schmoozer. Whether you love him or hate him, very few people would argue he’s not smart,” Galarcep says. “He’s always plotting the next move in a context that works for him. He’s a sharp guy.”