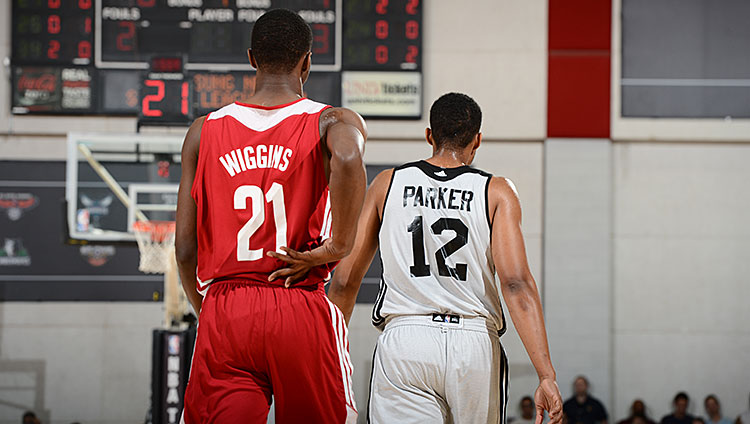 Las Vegas in July. The city is in the Las Vegas Valley, surrounded by sepia-toned mountains, in the sprawling and barren Mojave Desert. Average July temperature: 105 degrees Fahrenheit. But inside the gyms on the campus of UNLV, away from the desiccating heat, you can witness the entire life cycle of an NBA career take place before you, sometimes all in one game.

Vegas summer league kicked off on Friday, just as news of LeBron James’s return to Cleveland broke — one of the very few NBA “I remember where I was moments” in the history of the game, and maybe the first real one since the Malice at the Palace.

I was sitting in an airplane that had just landed at LAX when the LeBron story broke. I turned on my phone and the third tweet from the top in my feed was Lee Jenkins tweeting his as-told-to essay. Throughout the airport, NBA fans were ID’ing each other by team gear — jerseys, snap-backs, shirsies — and either living the vicarious thrill of breaking the news to a stranger or sharing in dazed “can you believe it” conversations. What a power move. The Greek polymath Archimedes once said, “Give me a lever long enough and a fulcrum on which to place it, and I shall move the world.” Well, LeBron had the leverage, maybe more leverage than any player in history, and he used it to move the whole NBA landscape.

You expect those name players to have the ball, to make dynamic plays, and you forgive them if, in the excitement of the moment, a possession or two runs counter to the flow of the game, or if a less notable, undrafted teammate gets frozen here and there. It’s only summer league, after all, just over a week of barely organized basketball, and we expect name players to matter for years to come.

Somehow, though, the other players, whose careers, contracts, and upsides are dotted with question marks, have to find a way to fit in, to prove that their more humble contributions can be counted on, can be replicated. 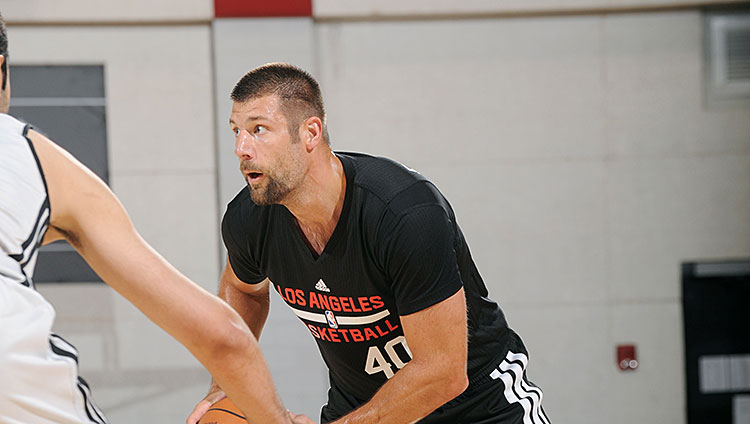 Imagine being Jon Brockman, formerly of the Bucks. He’s a three-year NBA veteran big man who last played in the league in 2011-12. Brockman averaged 7.3 points and 10.8 rebounds per 36 minutes for his career. He’s here to show he can set screens and pull down boards in a professional setting, whether in the NBA or elsewhere.

Based on talent, 30-year-old Delonte West should be playing out a veteran’s contract for an NBA team. Only four years ago, he was in the Eastern Conference semifinals with Cleveland. But bipolar disorder, and the perception of being crazy, derailed his pro career. Waived by the Mavericks in 2012, Delonte had a spell in the D-League before making his way to China on a one-year deal in October 2013. He is here in Las Vegas with the Clippers, looking for a team with money, a roster spot, and the willingness to roll the dice.

Despite the hard-luck stories, there is hope. So much hope that it means constantly qualifying your observations. You say things like, “It’s only summer league, but Rudy Gobert looks like an NBA player.” You are constantly trying to separate the real from the mirage.

For instance, Dennis Schroder has been a ray of light for the Hawks. He dropped 30 points on the D-League Select Team on Sunday night, using his athleticism, displaying an improved 3-point stroke, and showing off a new muscular build.

A late Schroder turnover led to the D-Leaguers forcing a two-minute overtime. Still knotted after the extra session, the game went to a golden-goal sudden-death period (this is, apparently, a thing) in which the initial jump ball suddenly becomes ridiculously crucial. There followed the most exciting 30 seconds of full-contact rugby basketball I have ever seen. It ended with Schroder committing a cardinal hoops sin, saving the ball from going out of bounds right in front of his own basket (his eighth turnover), leading to a Devin Ebanks game-winning layup. “It was entertaining,” said Hawks summer league head coach Darvin Ham of the ending, “for everyone but the coaches.”

The Knicks have been displaying a frankly shocking competency with the triangle offense. They are running only about three of the system’s numerous reads, but they are actually running them, going from strong side to weak side with deftness. (Noted space case Jeremy Tyler is executing the triangle’s passes from the elbow and draining midrange jumpers at a truly “but it’s summer league” clip.) What happens when this system, based on quick reads, is turned over to Carmelo Anthony and Andrea Bargnani instead of young, hungry athletes looking to impress Derek Fisher and Phil Jackson is another matter.

Thanasis Antetokounmpo — who will reportedly be stashed in Europe this season — has been towel-waving like it’s the seventh game of the conference finals. His Greek Freak the Elder genes manifest in mostly unsuccessful, if incredibly athletic, flails toward the paint, and his enthusiasm has won over the Knicks fans in attendance, if only because none of us can remember the last time a player in blue and orange actually seemed to be enjoying himself and his teammates.

Speaking of the Knicks, my childhood hero Patrick Ewing’s ongoing quest to land a head coaching job suffered a body blow after a desultory Hornets blowout loss to New York on Monday. This is where you say, “but it’s summer league,” in a more plaintive way. 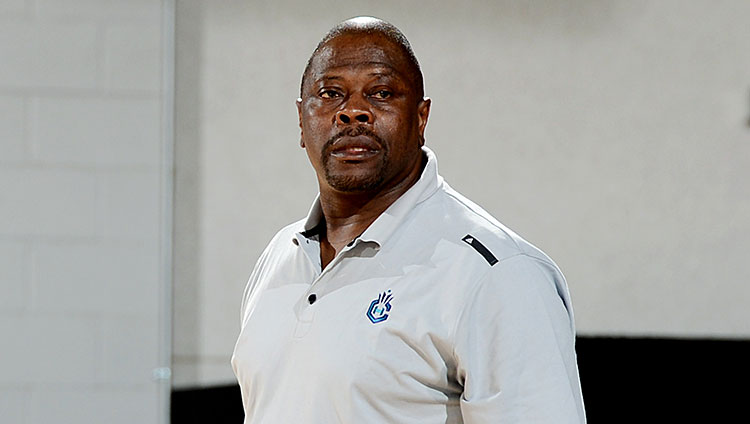 Ewing started the game basically standing three feet onto the court during play, constantly referencing a single sheet of paper, and pointing at the Hornets’ offensive basket whenever the team got possession — as if to say, “Here, score on this one.” At one point he yelled, “Defend! Defend! Defend!” As the Hornets’ offense quickly devolved into low-earth-orbit space garbage (on one offensive possession, three Hornets were in the paint, two trying to post, the other just doing whatever), the team fell behind by double digits and Ewing sat down for the rest of the game, never to rise again.

It wasn’t a great look, considering the way other notable rookie head coaches have approached games here. Steve Kerr has been roaming the sideline with his boyish features twisted in Jeff Van Gundy–ish coaching anguish, and he got a tech for arguing a late call. David Blatt has sat down maybe once in three games. Derek Fisher and his dad shorts have been barking out plays nonstop. 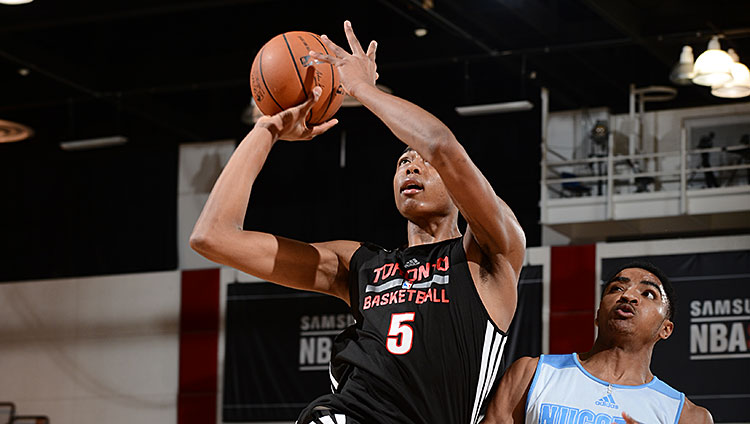 The Raptors’ Brazilian man of mystery, Bruno Caboclo, might be two years away from being two years away, but his freakish 7-foot-7 wingspan may actually be able to fold time. He’s raw, no doubt, but you can see, in those long strides and tentacle arms, the glimmers of what is either Giannisesque gold or a mirage based on body-type metrics and low-data-point international enigma buzz. Needs to work on: composure.

Mavs summer leaguer C.J. Fair unleashed one of the highlights of group play, dunking all up in Bruno’s mouth, face, and chest area. In the roiling wake of the dunk, Bruno got a tech for pushing the Mavs’ Eric Griffin, then went to the bench looking near inconsolable, with his teammates having to calm him down.

This is a time for new beginnings — desert renewal. Utah’s Rudy Gobert, a stick-figure French big man, spent last season looking like a person who should not be in the NBA. Here in Vegas, he’s averaging 12 points, nine rebounds, and 3.5 blocks in 24 minutes. Against the Bucks on Monday night, Gobert was absolutely rampant. He blocked five shots and threw one Jabari attempt out into the Mojave night. (Parker has now been on the short end of three summer league highlight blocks by Gobert, Sky Miles Plumlee, and Andrew Wiggins.)

Anthony Bennett spent his rookie season with the Cavaliers as a pudgy, asthmatic punch line, putting up historically bad numbers for a no. 1 pick. He came to summer league in shape and in UNLV form. He’s averaging 14 points and 8.3 rebounds in 31 minutes and just generally not constantly gasping for breath. Assuming the Cavaliers hold on to Wiggins, they would go into next season with four former no. 1 picks (Wiggins, Bennett, Kyrie Irving, LeBron), all under 30 years of age. 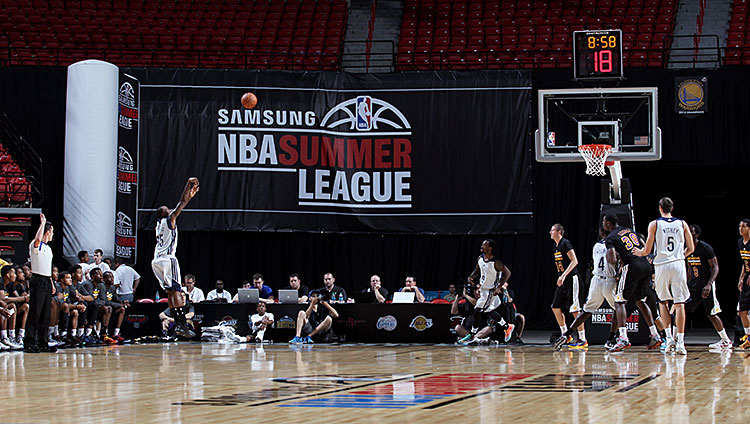 At the end of the NBA life cycle, 34-year-old Josh Howard is with the Pelicans’ summer team, after two years out of the league. “I love the game so much. I grew up just going outside and playing basketball, and I enjoy these moments,” he told a group of press. “One thing that was always said to me was that you ride until the wheels fall off. The wheels are still going, so, keep going.”

It’s not all faded glory and false hope, though. When you see the real thing, you know it. You react to it without intellectualizing it. It brings the gathered crowd of desert-braving fans to their feet, and elicits instinctual whoops of appreciation from the jaded industry types. You don’t have to say, “but it’s only summer league.” You just sit back and watch.

It’s Andrew Wiggins, who can’t really dribble to his right, spinning on the baseline, bursting toward the ceiling like a coiled spring, unfurling his spidery frame, and two-hand dunking in the general vicinity of Nerlens Noel.

It’s people in the crowd booing because Cox Pavilion doesn’t have screens to replay the dunk. It’s a burst of unbridled energy that no amount of coaching, no amount of practice could possibly teach. It’s the way the crowd sinks back into their seats when Wiggins, or Jabari, or Exum are on the bench. It’s the way parents in the arena will point out certain players to their kids. It’s a feeling that’s part hope, part hype, part an investment in players who will be part of your life for years to come. Sure, there are illusions. But every once in a while, you see something, and you feel like you are on fire.