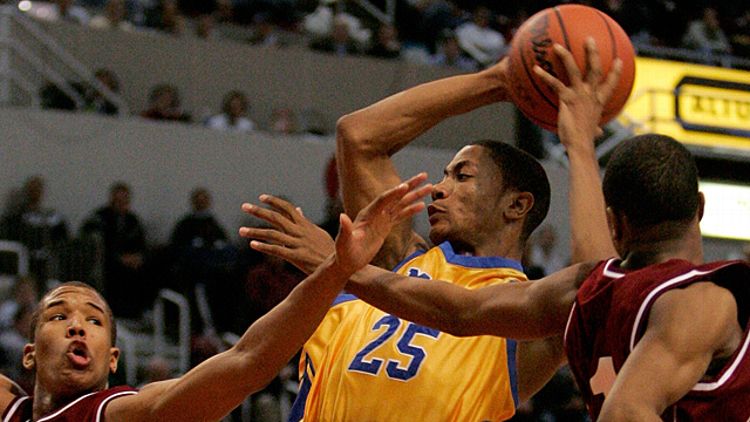 The first time I saw Derrick Rose try to tear down the United Center was in February 2006. I was a senior at a high school in suburban Chicago, and Simeon was playing Washington for the city’s public league championship. By then, anyone who cared about basketball in Chicago had heard about Rose. When a friend saw the game was to be broadcast on local station WCIU, a few of us ordered pizza and settled in front of the TV.

Growing up where we did when we did, we’d already become familiar with high school basketball greatness. Before he was making faces at Duke, Jon Scheyer spent four years becoming a living legend in Illinois. Everyone who followed basketball in the area had a Scheyer story, and mine was from his 2004-05 junior season. Scheyer and eventual state champs Glenbrook North traveled to Loyola University in Chicago to face Waukegan for a trip to the state quarterfinals. The same group that would watch Rose on TV made the drive to the packed gym, and while in line for soda, we heard an opposing fan say in a mocking tone that he was sure Scheyer would score 50. Technically, the crack was justified. Scheyer only had 48.

Early in his senior year, the local paper printed GBN’s schedule next to a story that implored people to go see Scheyer play while they had a chance. Everyone assumed that Scheyer, who averaged more than 32 points a game as a senior, would head downstate to make it two in a row. And he might have, if not for Derrick Rose.

Simeon’s 61-44 win over Glenbrook North in the quarterfinals came as no surprise to any of us who saw that game against Washington almost a month earlier. Aside from LeBron James, I’d never seen a high school player do what Rose did that night. He made his first 10 shots, on his way to 25 points, in a game that also included eight assists, and three chase-down blocks off the backboard. In the third quarter, Rose followed a breakaway windmill dunk with a steal near the top of the key. Rather than taking it full-speed to the rim, Rose slowed up just enough for one of his pursuers to catch up. Rose took off, cocked the ball back in his right hand, and gave that kid from Washington a story he can tell for the rest of his life. The dunk sent the Simeon bench and the United Center crowd into a frenzy. It’s also the play that accompanied Rose’s mention in last night’s 30 for 30, Benji.

Benji is the story of Ben Wilson, a high school phenom from Chicago who was gunned down in 1984, on the eve of his senior season at Simeon. The links between Rose and Wilson are everywhere, and it was impossible not to consider Rose’s life as I learned about Wilson’s death last night. Some of the connections are obvious. Both went to Simeon. Both wore no. 25 — Rose, in tribute to Wilson. Both won state championships — 2006 being the school’s first since Wilson’s team won in 1984. But the moment I couldn’t shake was from less than a month ago.

After watching the Packers beat the Bears on a Thursday night, I got back to my apartment and flipped to SportsCenter just in time to see a clip of Rose at a publicity event for his new shoe. Rose sat hunched over on a platform at the front of the room. He brought a hand to his face and wiped his eyes. A question followed about the inspiration Rose has drawn from his fans as he’s worked his way back to health, but his response made it clear that the emotions came from a different place. He lifted his head, wiped his eyes once more, and spoke through the collected clicks of the cameras. “It’s truly a blessing,” Rose said. “With all this stuff that’s going on in this city, a kid from Englewood’s got something positive going on.”

Englewood is the South Side neighborhood where Rose grew up, just a few miles from Wilson’s boyhood home in Chatham. And as it did during Wilson’s childhood, gang violence is once again haunting the South Side of Chicago. The Gangster Disciples, the gang mentioned throughout Benji, have been responsible for more than a quarter of the nearly 400 homicides in the city this year. As crime rates fall nationally, splintering factions and newly formed gangs have been credited with a spike in the city’s murder rate. Chicago is hurting, and that, not a torn knee ligament, is what had Rose in tears on a supposed day for celebration. “We ain’t supposed to be here,” he said. “At all.”

Growing up 40 miles outside the city, I could never claim Chicago as home, but I’ve always felt connected to that place. My grandfather was the son of an Italian immigrant and grew up in the Austin neighborhood on the city’s North Side. My mother, on the right words, sounds like Elwood Blues. Every trip to Soldier Field and summer spent working downtown deepened my love for the city, and as violence and a teacher’s strike dominated the last few months, I can’t say I was unaffected.

The love people have for Chicago has played its part in the feelings they have built for Rose. Other teams have superstars to represent them, but none are represented by one of their own. Rose loves this city, and for that, as much as for his play, we love him. As I watched video of thousands attending Ben Wilson’s funeral, it was hard not to think about the sentiment that when Rose was hurt, the city stood still. The tragedy of the events doesn’t approach comparison, but each man’s place within the city’s collective conscious does. Rose is the biggest star in a football city, in part because he, like Wilson, is the native son. Rose may say that he isn’t supposed to be here, but he is, and he’s carried Ben Wilson’s legacy like no one else could.