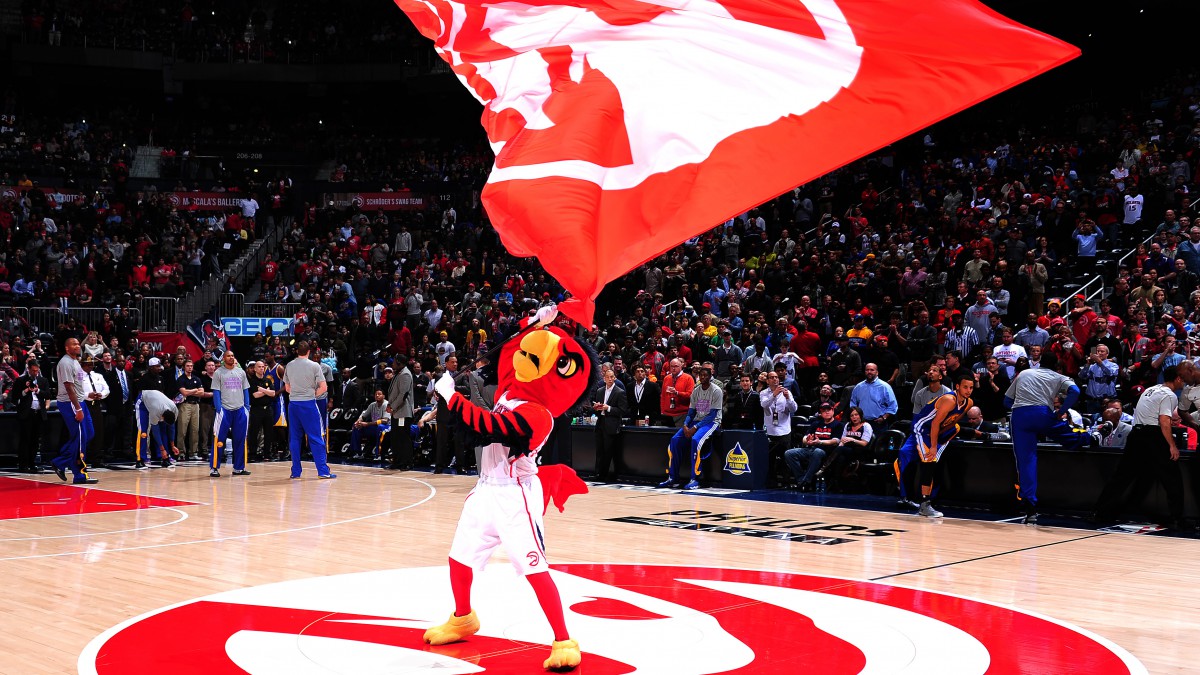 His team having just lost a raggedy rock fight of a basketball game to the Memphis Grizzlies, Al Horford of the Atlanta Hawks sat on a stool in front of his locker, nattily attired in ice bags and a towel. Horford’s play, as well as that of the rest of the Atlanta forwards, had been the primary reason for both the rough nature of the game and the 94-88 defeat that Memphis hung on the Hawks. Horford, along with DeMarre Carroll and Paul Millsap, had shot a combined 7-for-30 from the floor and managed only 23 rebounds. This was near the end of a remarkable two months in which the Atlanta Hawks were by far the best team in the NBA, the winners of 19 straight games. Two days earlier, at home in Atlanta, having had their streak broken in New Orleans, the Hawks took away a signifying victory against the Golden State Warriors, the second-best team in the NBA. However, on this night, both on the court and after the game, Horford looked like a tired man. Excellence, as it happens, can be very exhausting.

“We’re looking forward to the break,” Horford said. “I think that the break always gives you that second wind, especially this year, where we get a few extra days, and really get to rest, then, and really get ready for the second half of the season. … You kind of have to keep moving. Once the season ends, we’ll be able to go back and reflect.”

They have been the league’s best story, ever since they lost to the Milwaukee Bucks the day after Christmas. They won through New Year’s. They won through the tree-on-the-sidewalk period thereafter and all the way up through Super Bowl Sunday. People didn’t really catch on until they swept a mini trip through the West right after the first of the year. The bandwagon went to afterburners right about then. Atlanta’s home attendance is up to nearly 90 percent of capacity. The Hawks’ TV ratings are equally fat. And they have one of the most vigorous social media presences of all NBA teams.

None of which, of course, would have been possible had the Hawks not started to win at a giddy pace. But none of it would have been quite so extravagant were the Hawks not such a damned appealing basketball team. On the surface, they are a collection of talented spare parts. There is not one real star, although Horford and point guard Jeff Teague are getting there. Because they do not have to depend on one or two players, they each have learned to depend on everyone else. “We’re very confident with our group of guys, one through fifteen,” Horford said. “That’s something that I’ve never been able to say, but it’s a good luxury to have that we have here. The guys understand their roles, and we embrace playing the game that way.”

At their best, the Hawks play sweet, unselfish basketball. (How unselfish? The landlord at this joint has been known to compare the way Atlanta plays to the 1985-86 Boston Celtics, and the landlord at this joint talks about that Celtics team the way some people talk about a visit to Lourdes.) Undoubtedly, this is partly a result of the Hawks having hired Mike Budenholzer off Gregg Popovich’s staff in San Antonio in 2013. Budenholzer worked with Popovich for 16 years, and you can see more than a little of the way the Spurs play in the way the Hawks have stormed through the first half of this season.1

Budenholzer has a stolid, Belichickian terseness when discussing his team, but they clearly have bought into his system at both ends of the floor. They milk the shot clock with terrific efficiency, but it was their defense that was vital to the long winning streak that left them at 43-10 and atop the Eastern Conference. They have spent the season in the NBA’s top five in both points allowed and opponent’s shooting percentage. They all guard and they all help and their depth has become a serious weapon, even though, at the beginning of the season, the Hawks team photo should have been a composite of 13 individual milk cartons. Off the bench, Kent Bazemore, Dennis Schroder, and Mike Scott, none of whose names ever was spluttered on television by Dick Vitale during their college days, not only have become valuable contributors, they are legitimately pushing the nominal starters. (Bazemore, especially, is improving game by game.) But the hub of it all is Teague, of whom some people actually had heard before the past month or so. 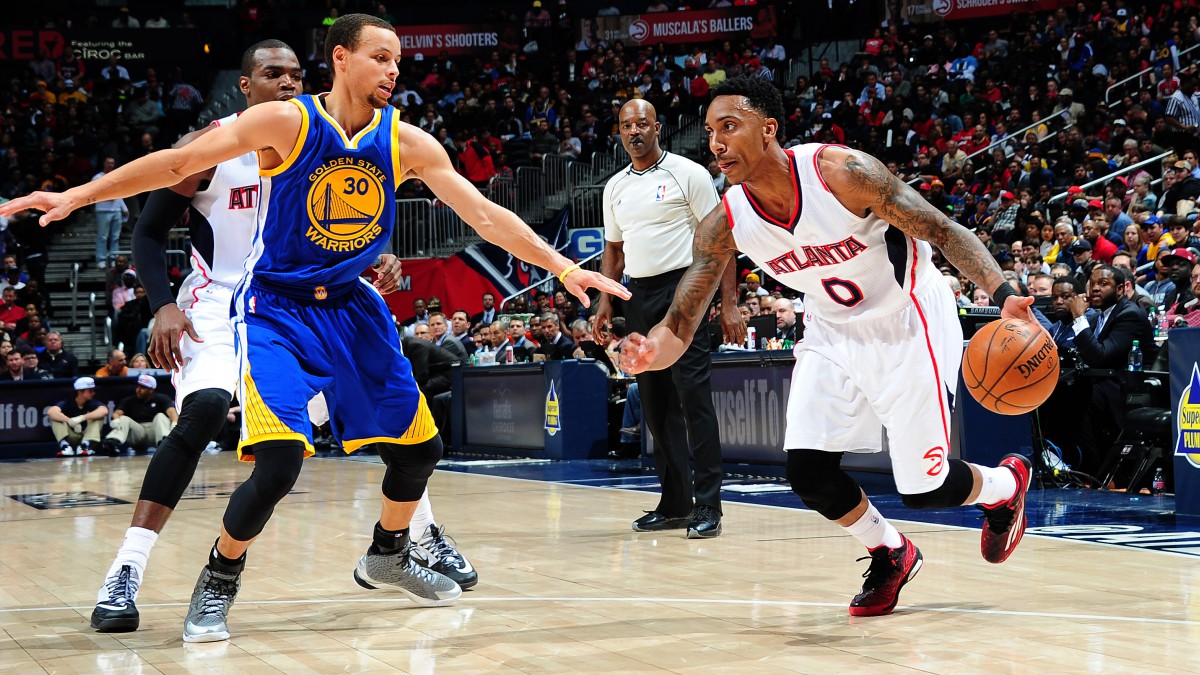 The game last Friday in Atlanta against the Warriors was a legitimate event. It had been sold out for weeks and, ultimately, it would be the highest-rated event in the history of the Fox Sports South network. Golden State had the league’s best player in Steph Curry and another genuine star in Klay Thompson. Coming into the game, Atlanta was 41-9 and the Warriors were 39-8. There was a buzz in the city, and several people could be seen who looked like the Red Skull, their faces painted in the Hawks’ colors. This is what a playoff game looks like at the beginning of February. This is the kind of night that finds the Atlanta Hawks now.

(And let us commend the officiating crew of Zach Zarba, Heywoode Workman, and David Guthrie for their strict adherence to Bob Ryan’s First Rule of Referees: Know why you’re on the floor. They pocketed their whistles during an exciting first half; the Warriors didn’t shoot their first free throw until one-tenth of a second remained until halftime. Granted, the Warriors were not altogether pleased with this, but they didn’t pay to get in, either. The crowd was rocking.)

To be brief, Teague played Curry into the boards of Philips Arena. While Curry got 26 points, I can’t at the moment remember a single one of them being in any way vital, whereas Teague kept forcing a sluggish Golden State defense, time and time again. Atlanta gradually built a working margin, and then built upon it, and Teague was in the middle of all of it.

Down the stretch, the Hawks made a play every time Golden State got vaguely close. With a minute and a half left, the Warriors cut the lead to six, only to have Paul Millsap find DeMarre Carroll for a layup down the middle. Forty seconds later, with the lead sliced to six again, Teague got his teeth rattled on a foul by Harrison Barnes. He stepped to the line and coolly dropped two free throws. This was native toughness as a skill to be honed, and it was a pure example of what the Hawks have been about this season.

“That was a fun game. The crowd got behind us and we were able to get some stops,” said Teague. “They were shooting everything. They’ve got some talented players over there. It was amazing. Kyle [Korver] was yelling. I’ve never seen him yell. We are a confident bunch, but it’s a long season. We’ve got another big test coming up against Memphis. Celebrate this win tonight and get ready tomorrow for Memphis.”

The game in Memphis two nights later bristled and buzzed with the same intensity, because the Atlanta Hawks bring the playoff with them now wherever they go. They lost, and beating the Hawks is suddenly a very big deal. Putting together NBA Finals scenarios is now what you do during game-presentation breaks — enough with the damn parachutes already, OK? — when Atlanta comes to town. Based on this weekend, I’d be very happy with Atlanta–Golden State or Atlanta-Memphis in this season’s last series. Mike Budenholzer is having none of this because he is a coach, and it is in his contract to be as wet a blanket as possible as often as possible. But he sees it, too.

“Our group has found a way. On different nights, it’s different people,” Budenholzer said. “Some nights our bigs have big nights. Other nights, our wings or point guards. I think our group really competes hard on the defensive end and gives us a chance. We weren’t our best tonight. I think Memphis deserves a lot of credit for us not being at our best. I think every night it’s someone different for us.”

They have played so well this season that they bring the future with them now everywhere they go. It is a future that many people want to see. Whether this is too heavy a burden over the second half of the season remains to be seen, but there’s no question that Al Horford’s right. These guys need a break.

The 10 Worst Breakups in NHL History