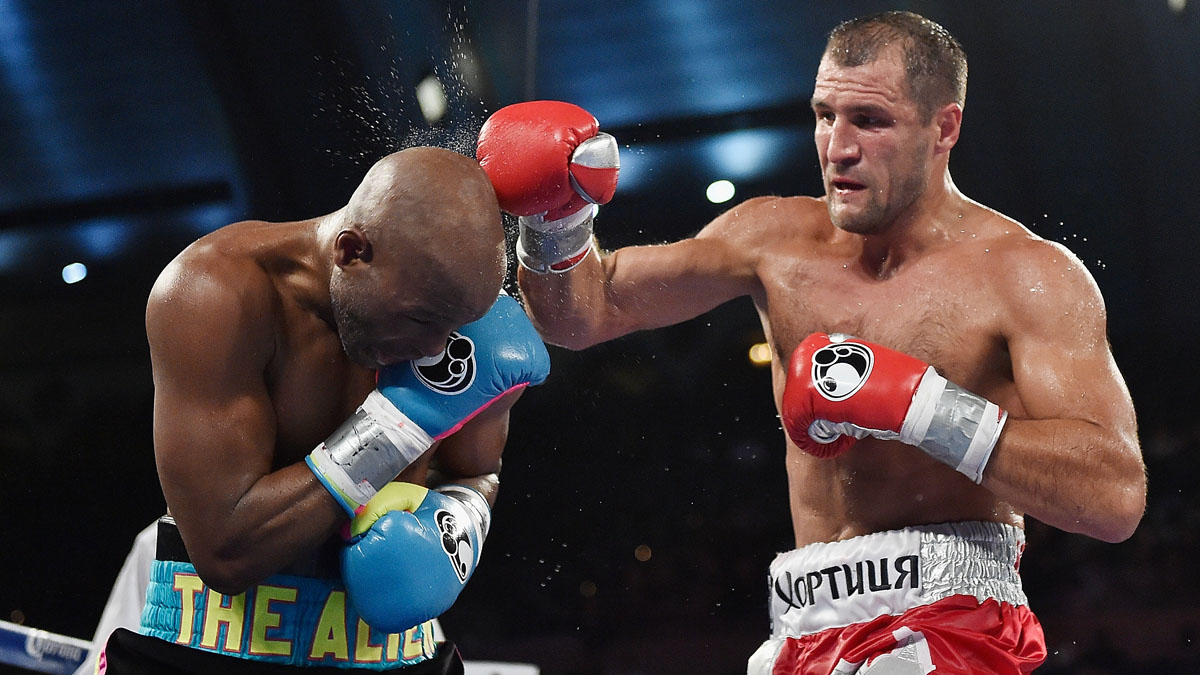 It made perfect sense and none at all: The best matchup of the worst year in boxing’s recent history pitted Sergey Kovalev, an undefeated knockout specialist in his prime, against Bernard “The Alien” Hopkins, a 49-year-old legend who has extended his career by eking out decision victories in which hardly any action takes place. Predicting a Kovalev win in Saturday’s HBO main event in Atlantic City meant the likelihood of watching a pretty old man (and a downright ancient athlete) absorb a sickening beatdown. Predicting a Hopkins win meant you expected to be bored out of your skull.

So why was the boxing world so lathered up for an event featuring one fighter two months away from his 50th birthday? Why was a fight whose probable outcomes seemed likely to inspire some mix of exasperation, self-loathing, severe depression, and/or nausea considered possibly the most significant event of 2014? The answer, for the most part, is that this year in boxing has been so rotten, so awful, and so bereft of competitive bouts between prominent fighters, that by the time Hopkins-Kovalev was announced in August, fight fans were eager to embrace anything that seemed like an honest attempt by the promoters, managers, and TV executives who control the sport to pit two elite fighters from the same weight class against each other.

Hopkins-Kovalev gave us that. So far in 2014, nearly all the pleasure in being a boxing fan has come from the random bits of gonzo humor the sport is so good at generating. Weekend after weekend, it felt like there were no good fights to watch, so we giggled at opponents with names like Terdsak and Doudou, we goofed on Jermain Taylor’s part sexual deviant, part zombie stare, and we snarked endlessly about Chris Algieri’s love for tights and workout shorts that make his bulge look the size of a young cantaloupe.

It’s hard to find a boxing fan of any age who doesn’t love the sport’s frequent detours into the absurd, but where these had traditionally been the garnish on fight fans’ plates, far too often in 2014 they have been the steak. Hopkins-Kovalev was a real fight between two light heavyweights at the top of the 175-pound division. So what if it had been years since Hopkins was involved in an exciting fight? So what if Hopkins might stink out the joint, make Kovalev look bad, and cruise to a tactically brilliant but monotonous decision? So what if Kovalev might steamroll Hopkins? This was a fight worth making, and Saturday night, for the first time in way too long, boxing felt more like a sport than a sideshow. And that was worth getting excited about.

The last six years of Bernard Hopkins’s career have seemed a bit like a magic act. He was a hypnotist in the ring — a snake charmer who chose younger, stronger opponents near the top of the 175-pound division and defanged them before our eyes. Hopkins exerted a comprehensive mastery over his victims, conquering them tactically, mentally, and physically. He would lurk beyond the range of his opponents’ punches, lure them in and let them miss, and then score with a quick counter whose momentum would carry him into a clinch with his mark. In the clinch, Hopkins could smother incoming punches and buy time (and sometimes use his head or shoulders or elbows to grind away at opponents’ faces) until the referee would break up the fights and reset the action. Before long, the frustration would set in. Kelly Pavlik, Jean Pascal, Tavoris Cloud, Karo Murat, Beibut Shumenov — they all became convinced, to varying degrees, that trying to hit Hopkins was more trouble than it was worth. And from there, once they were fighting Hopkins’s fight at Hopkins’s speed, the slick old fox could make fools of the young bucks.

Boxing’s often meaningless jumble of sanctioning bodies and championship belts and inflated records were an aid to Hopkins during this period. More often than not, they enabled him to target nominal titlists like Cloud and Shumenov, whom Hopkins knew he could handle. Occasionally, however, the pressure of expectations will combine with the lure of money and Hopkins’s admirable desire to test himself against truly elite competition, and the snake charmer will be stuck tickling a cobra who can’t be disarmed.

Such was the case in 2012, when Chad Dawson used a long, effective jab and a pair of quick feet to outwork Hopkins and earn a wide decision victory. It was a similar story Saturday night with Kovalev, a rangy puncher who controlled Hopkins with power rather than foot speed. Throughout much of Kovalev’s 12-round decision win, Hopkins found himself with his back against the ropes or trapped in the corners of the ring. Hopkins couldn’t back Kovalev into the center of the ring or get close enough to crowd him, because stepping forward meant walking through a thicket of fearsome power punches. (This lesson came early, when Hopkins tried to punch out of the corner toward the end of Round 1, and Kovalev countered over a jab to drop Hopkins to a knee.)

Hopkins, always a defense-first fighter, never got to offense second because Kovalev’s pressure wouldn’t allow it. And Kovalev was able to keep Hopkins stuck against the ropes, cornered, concerned with defense and survival, while Kovalev remained on top of him with feints, jabs to the midsection, and heavy overhand rights, all conducted at a measured pace that allowed Kovalev to go 12 rounds. Hopkins fought back, landing flush single-shot counterpunches in the seventh, 10th, and 12th rounds, but it was never enough to force Kovalev off his tack.

The last telling moment in the fight came about 90 seconds into the final round. Kovalev, who must have known he was far ahead on the scorecards, appeared to be willing to cruise to victory at the same steady pace they’d fought at in the previous 11 rounds. But Hopkins, proud and stubborn as ever, decided that if he couldn’t win the fight on his own terms, he was going to lose on them. While Hopkins was trying to duck and roll out of range, Kovalev caught him with a sweeping right to the side of the head. Hopkins took a step back, popped up his head, and then stuck his tongue out at Kovalev.

Now, if there is one fighter in boxing whom opponents should be prudent about taunting, it’s Sergey Kovalev. Nathan Cleverly, who responded to a Kovalev combination in their August 2013 bout with a false-macho “bring it on” gesture, didn’t only absorb a TKO drubbing over the next two rounds — he also found himself on the receiving end of Kovalev’s famed crotch feint, followed by a crunching one-two.

Likewise, when Hopkins tried to show up Kovalev on Saturday, Kovalev unloaded on the older fighter. The patient approach that had worked for Kovalev through the entire fight was discarded for one and a half minutes of mayhem. Kovalev smashed his big, looping right hands over and through Hopkins’s guard, then gathered himself and found his range with a pair of jabs before sending more vicious rights into Hopkins’s head, gloves, and arms. Anything Kovalev could make contact with, he wanted to hurt. He pounded Hopkins from pillar to post, and at times Hopkins’s upper body was slumped over — almost limp — held upright by his sturdy, obstinate legs, which seemed to be screaming: Hell the fuck nah! Not going down!

And Hopkins never went down in the 12th. HBO’s broadcasters seemed to believe that Hopkins lured Kovalev in for that final maelstrom because the older fighter knew it would offer an outside shot at landing a miracle counter between Kovalev’s punches. In the moment, I thought Hopkins was trying to go out in a blaze of glory: to prove that Kovalev could come after him with enough firepower to lay out any light heavyweight on the planet, and that Hopkins, at 49, still had the defensive instincts, willpower, and strength to survive it.

Or, since we’re talking about Bernard Hopkins, one of the most calculating fighters of all time, maybe it was both. Perhaps Hopkins went out hedging his bets: He’d invite Kovalev in to finish him, and if Hopkins couldn’t find a perfect countershot to turn the fight around, then at least he would show fans a feat of endurance, punch resistance, and bravery they’d never forget. And, well, if that’s the case, then Hopkins was right.