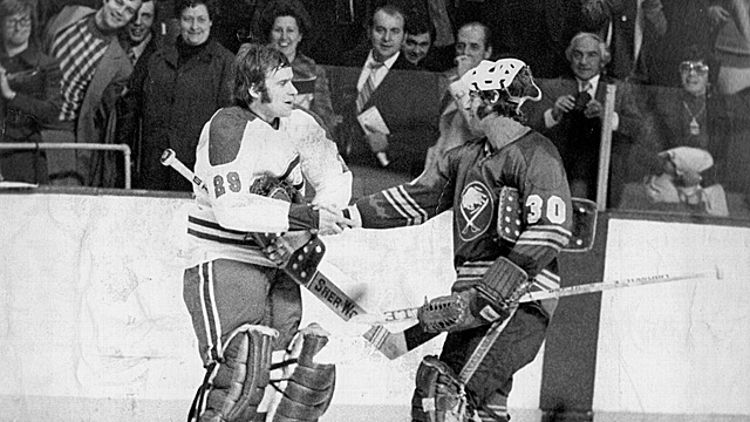 But it didn’t feel like I thought it would.

It happened in late March, not long after I’d been called up to the Montreal Canadiens from the minor leagues. I’d played two games with the Canadiens. The next game was in Montreal against Dave’s team, the Buffalo Sabres. A few days before, I’d been told by our coach, Al MacNeil, that our first-string goalie, Rogie Vachon, would start in net.

That night, my father called from Toronto and said he thought he’d drive to Montreal for the game. I tried to discourage him, telling him what MacNeil had told me, knowing how disappointed he’d be. He said he’d come anyway.

Buffalo was an expansion team playing in its first season. The Canadiens, stuck in an unpromising year, were waiting for the playoffs to begin. (To everyone’s surprise, we would win the Stanley Cup that year). A visiting team designates its starting lineup first; Sabres coach Punch Imlach wrote Dave’s name in as his goalie. MacNeil wrote in Vachon’s. After the game’s initial stoppage in play, when Imlach was first allowed to make a change, he replaced Dave with Joe Daley. Dave and I sat on opposing benches watching the game.

Early in the second period, there was a scramble around our net. Vachon went down and didn’t get up. A few minutes later, he was still down. MacNeil motioned for me to go in. When Imlach saw me leave the bench, he put Dave back in the game.

For years, Dave and I had played against each other as kids in neighborhood hockey games, each of us announcing in our heads our own personal NHL games, each of us making fabulous, impossible saves, neither of us imagining that this would really ever be us. Years later, here we were, in the Montreal Forum, and because he had taken a chance, our father was sitting in the stands watching.

I couldn’t get comfortable in the game. Already struggling with the sense of unreality that I’d felt since joining the team — if this is me, this can’t be the real NHL — this was worse: If this is me and Dave, this really can’t be the NHL. I felt like I was outside myself. But I had a game to play. I had a new team. I had to prove myself. The Canadiens had been ahead when we both went in; the Canadiens stayed ahead. The game ended. I never felt part of it.

Dave and I played against each other a few more times over the years. It was never fun. When I played, I didn’t want to think about anything. Not about injury or illness, not about bad things, or good, at home, not about opponents, not about winning or losing, about what each would mean, how each would feel. I wanted to empty my mind. I just wanted to do. But if Dave was there, I couldn’t pull that off. If we won, how would he feel? If they won, how would I feel? Would things be different? I wanted us to win every game. I needed to make every game I played personal to put everything into that game that needed to go into it to win. When I played against Dave, I couldn’t make it personal. And if I couldn’t put everything into it, I couldn’t play.

I always envied the Esposito brothers. They seemed to love playing against each other. Phil would laugh at Tony if he scored; Tony would screech at Phil if he stopped him. Maybe it’s different when one brother is a shooter and the other’s a goalie. Even if Phil had scored on Tony every game they played — and he didn’t — even if scoring one shot out of seven for a shooter is success and stopping six shots out of seven for a goalie is failure, for bragging rights, it seems different. Brothers don’t do the math.

For our father watching the games, he would find a place to stand, then grimace and contort himself for 60 minutes, making every save at both ends. Our mother, after asking us if it was all right, stopped going altogether. When it had been only one of us in a game, she could keep her eyes on the floor in front of her when the puck was in our zone, then raise them slowly when she was sure it wasn’t. When it was both of us, she had nowhere to look but the floor.

I don’t know how it will be for John and Jim Harbaugh and their family. The two brothers are only 15 months apart in age (Dave and I are almost six years apart). That made the Harbaughs rivals, not just big brother/little brother, hero/hero-worshiper. They’re more used to this, and their parents are, too. Being coaches will also make it easier. They’re busy every moment of the game. They’re also widely separated from each other, as goalies are, but goalies are part of the action itself in a way that coaches aren’t. Goalies are more aware of each other. They feel each other.

The Harbaughs might enjoy coaching against each other in the Super Bowl as much as they do against other coaches — or they might not. But this I know: Some years from now when John isn’t coaching the Ravens and Jim the 49ers, this game won’t be about the Ravens and 49ers. It won’t be about who won or who lost. Deeper than that, for them and for their family, it will be about the Harbaughs.

When that first game in Montreal was over, I skated toward the boards to get off the ice. But Dave knew something I didn’t. He skated past center directly into my line, and we did what hockey players don’t do at the end of a game: We shook hands. I have two pictures on my wall from my time with the Canadiens. This is one of them.

Video: Jalen Rose Wants to Blow Up the Celtics