Remembering the Man Who Made New York Love the Knicks Again: Anthony Mason, 1966–2015 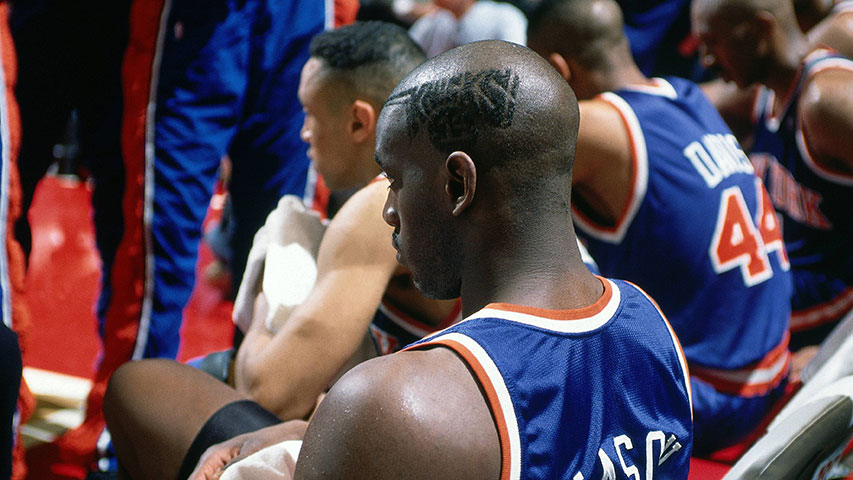 From New York to Istanbul, every fan base likes to imagine that its team embodies its city’s authentic spirit. Fans can look at their disparate collection of millionaires in matching uniforms and say, “This is who we are.” Supporters of FC Barcelona refer to their team as “Més que un club” (“More than a club”), a physical incarnation of Catalonian aspirations. The Showtime Lakers symbolized the Hollywood glam of the ’80s like a hot spotlight refracting off the hood of a sports car, while their archrivals, the Boston Celtics, looked like a bunch of no-frills, blue-collar grinders who’d just clocked out at some factory on the city’s outskirts.

Mostly, this conceit is just narcissism. How many times have we heard some variation of such-and-such team “representing the hardworking spirit” of wherever? Who doesn’t want to be considered hardworking? I always wonder if there’s some town where people have no work ethic and absolutely zero grit, and that’s why they can’t have a team.

This imagined connection between team and place is part of the magic of sports, an illusion that turns multibillion-dollar businesses run by the most un-blue-collar people on earth, many of whom made their money by simply being born, into scrappy underdogs whose success somehow flows from your own labors and whose successes you therefore deserve. It’s bullshit, basically.

Except, then I think about Anthony Mason, who died over the weekend at the age of 48, and I’m not so sure.

For Knicks fans, the ’90s iteration of the team seemed like an inextricable ingredient of the city’s atmospheric brew. The main reason: Anthony Mason, live and direct from Springfield Gardens, Queens.

Despite hailing from a city that is anything but, Knicks fans invariably see themselves and their team as underdogs. It’s that mixture of started-at-the-bottom insecurity and overbearing “Mecca of Basketball” braggadocio that forms the team’s core personality. So with innate talents that evoked the city’s legendary basketball history, along with a melting pot of a résumé that included stints in Turkey, Tulsa, Long Island, New Jersey, Portland, and Venezuela, Mason fit right in.

“In Turkey, I learned the physical game. In Venezuela, I learned the finesse game,” Mason told New York Magazine in a 1993 feature about the team’s championship aspirations. In the same interview, he unconsciously evoked the city’s historic appeal: “Once you get a chance on a team like the Knicks — a team that don’t care where you went to school or what you did in your past — you’d really love to stick. So, I did whatever it took.”

At 6-foot-7 with a carved-obsidian NFL physique and a scowl reminiscent of the actor Bill Duke, Mason appeared, at a glance, to be a hardwood intimidator right out of NBA central casting. Certainly, unapologetic pugnaciousness was an important facet of his game, one that comported nicely with Pat Riley’s Schenectady heel-turn philosophy for the Knicks to be “the hardest-working, best-defending, most-disliked team in the NBA.” After all, Mase broke into the team as a camp invitee in 1991 by fighting with Xavier McDaniel — the Knicks’ marquee offseason trade acquisition, he of Singles and strangling Wes Matthews’s dad fame — five minutes into the team’s first practice. Yet, if brawn, forearm shivers, and six fouls were all there was to Mase’s game, he might be well remembered within the franchise, but he wouldn’t be the revered figure he is today.

Mase’s obvious physical presence was tempered by speed, by a soft touch around the basket, deft footwork that gave him the appearance of a pro wrestler practicing ballroom dancing, and what was most extraordinary: his ballhandling skills. More than any other part of his game, those handles linked him to New York City’s basketball culture, where the currency of respect on every wind-whipped, all-season open-air basketball court is, and always will be, a player’s ability to get to the cup. Years before the positional revolution had overrun the ramparts of tradition, Mase, who Riley often allowed to bring the ball upcourt like some kind of escaped low-post marauder, was a harbinger of things to come. 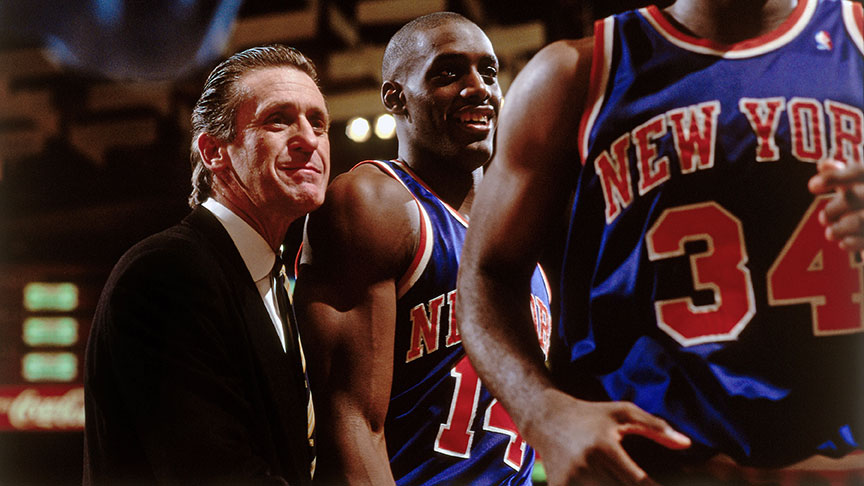 That the punishingly dictatorial Riley gave Mase the freedom to create was surprising. Less so was that Mason chafed under the constraints of his coach’s boot-camp culture. Riley disciplined Mase numerous times because he trash-talked too much,1 complained about the Patrick Ewing–centric offense, or claimed Riley didn’t properly value his abilities.

After Mase publicly objected to Riley’s assertion that Charles Smith was the team’s best offensive forward, Riles had him kicked off the team “indefinitely” down the stretch of the 1993-94 season. A man of the people in word and deed, Mason responded by showing up at New York’s next home game against the Sixers as an attendee, sitting in the upper-deck blue seats. Soon after, he tried to go to practice, as Mark Jacobson, in a 1994 New York profile of Mason, describes:

Hearing of Mason’s presence, the famously unflappable Riley got him on the phone and started screaming, “Don’t you get it? You’re banned! You’re barred! You’re not part of the organization!”

The Knicks went to the Finals that season. On the way, Mase defended Derrick Coleman, Scottie Pippen, Horace Grant, Indiana’s Davis brothers, and eventually Hakeem Olajuwon, to whose Rockets the Knicks lost in seven. Riley left after the next season, giving way to Don Nelson, whose love of point forwards freed up Mason to average then-career highs in points (14.6), rebounds (9.3), and assists (4.4). But Nelson never won over the team and left after one year. Jeff Van Gundy took over, and Mason was soon traded to Charlotte for Larry Johnson. Ten days later, the new Hornet was arrested for fighting 10 Manhattan cops.

Although he wasn’t technically employed by the franchise, Mason stayed close to the city and the Knicks after retiring, attending games and team functions as a kind of unofficial ambassador. He was there when J.R. Smith got his Sixth Man of the Year Award in 2013, the same award Mase won in 1995.

Still, the moment I’ll remember most about Mason came during the raucous ending to Game 7 of the 1994 Eastern Conference semifinals against the Chicago Bulls: The game’s coming to a close, and Mase is dribbling out the clock with his trademark flair — like a bulldozer doing needlepoint. When the buzzer sounds on the phantasmagoric win, a victory the team had been chasing for years like Wile E. Coyote chases the Road Runner, it almost doesn’t seem real. As Ewing strides around the court, arms held high, calling for the adulation the fans had so often withheld from him, there’s Mase, standing at half court and spiking the ball so hard that it should’ve exploded. It bounced up toward the Madison Square Garden ceiling, and I’m still not sure it ever came down.

Life, Liberty, and the Pursuit of Crappiness: A Closer Look at the Sixers