How the Ducks Can Beat the Kings 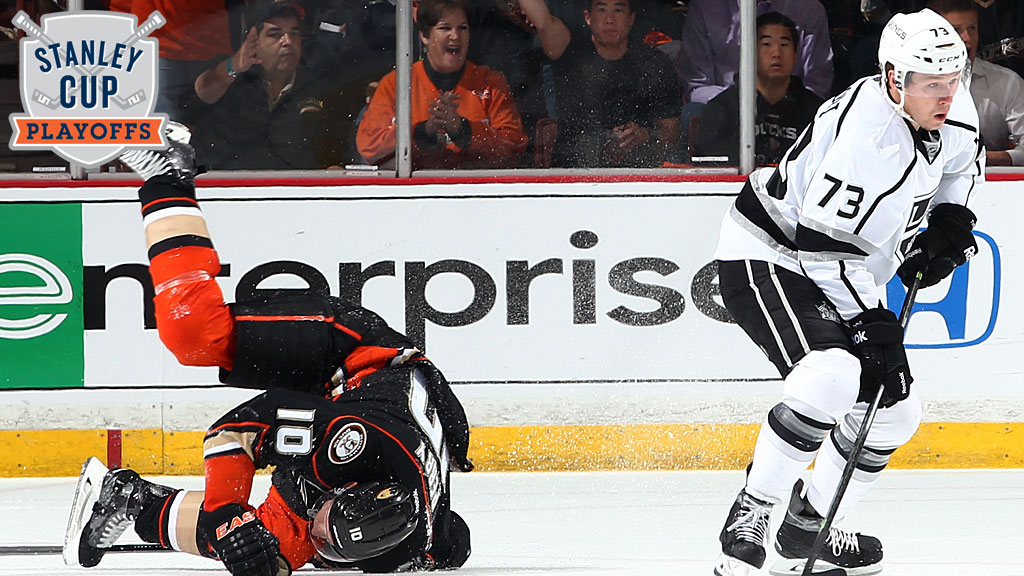 You might be forgiven for not realizing that the Anaheim Ducks have, or at least had, home-ice advantage over the L.A. Kings in the second round of the playoffs. With the two teams located just a traffic jam away from one another, Kings fans flocked like, well, you know what to the Honda Center, cheering as their team took the first two games on the road.

Now trailing 2-0 in the series and heading to Staples Center for Game 3 tonight, here are a few things that Anaheim could try to do to get back in it.

1. If at all possible, avoid Anze Kopitar. One of the fun things about the playoffs (as compared to the regular season) is how a seven-game series can expose a team’s player-utilization strategies. The L.A. Kings blog Jewels From the Crown took an interesting look at how the Ducks have tried to play the Kings, showing how coach Bruce Boudreau initially pitted his top line head-to-head against L.A.’s first trio. You could see the logic, and furthermore, the San Jose Sharks (R.I.P.) showed that this strategy could work, at least for awhile.

But by the end of Game 2, Boudreau was actively shielding his top players from being neutralized by Kopitar. “I did it because Kopitar’s line was dominating them,” he said. “I could be stubborn and leave them out there all day, but we had to move something around to get away from it. Then, maybe [Ryan Getzlaf’s] line could get something accomplished.” With the series moving back to L.A. for Games 3 and 4, though, the Kings will now have the last change before every faceoff, making it more difficult to get out of that Kopitar glare.

2. Try out some new plays. In case you haven’t heard the good news, former NHL referee Kerry Fraser has finally pounded the gavel on one of history’s longest-running debates: ruling that the O.G. Mighty Ducks’ famous Flying V play was indeed legal. (On the other hand, if there’s anyone who could stop a five-on-one, it’s Drew Doughty.)

3. Harass Jonathan Quick more: This is one of those things that sounds straightforward, like when an intermission show’s “Keys to the Game” are (1) score goals, (2) stop the puck, and (3) good special teams. But it’s actually a small thing that ties into a larger conversation about the Ducks’ season and hockey statistics. Anaheim’s possession numbers in Game 2, as proxied by shot attempts, outshone L.A. But many of these shot attempts were not what you’d describe as legitimate scoring chances. (This is similar to what’s been going on with the Rangers in the Eastern Conference.)

ESPN.com’s Pierre LeBrun spoke with a number of Ducks players who felt they needed to be setting up more dangerous goal-scoring situations by crashing the net more, deflecting shots, chasing rebounds, and changing angles. Over the long term, overall possession and the rate of quality scoring chances start to converge. But in a short playoff series, you have to try to get all the volatility you can on your side.

4. More contributions from Corey Perry. I’m not talking about him getting on the stat sheet, mind you, but rather in the Kings’ heads. He should worry less about his Corsi and more about going full-on Loki. How else can you feel after seeing the vaguely leprechaunian sniper’s latest shenanigan? This is where the guy truly shines. The studied nonchalance with which he fills Jeff Carter’s glove with water suggests that he’s killed before and he’ll kill again. It’s only a matter of when and how. (Carter’s malicious retaliatory actions in Game 2, on the other hand, CLEARLY WENT BEYOND THE PALE.)

5. Lobby for a change of venue. Play the games at Dodger Stadium. It’s worked before, and according to the NHL it’s never too warm for outdoor hockey.

6. Give the kid a chance … There’s a saying that if you have more than one starting quarterback, you don’t have a starting quarterback. And like all sayings about quarterbacks, it applies equally to catchers, significant others, and goalies. The Anaheim Ducks have the kind of depth in net that many NHL franchises would kill for, but going into the playoffs, and now even during them, there’s been ongoing discussion about who should start: Jonas Hiller or rookie Frederik Andersen. (Boudreau doesn’t divulge this information before games, which keeps people guessing.)

It won’t happen, and I’m mostly just daydreaming here, and I don’t think that goaltending has been Anaheim’s major problem. But still, my secret wish is that they’d answer the goalie question by opting for Door No. 3, the one concealing John Gibson. The 20-year-old has been playing with the Norfolk Admirals in the AHL playoffs and is tied for the league lead in playoff save percentage. At the end of the regular season, he posted a shutout in his NHL debut. He led Team USA to a gold medal at the 2013 World Junior Championship and then, a few months later, was in net when the American men won bronze somewhat unexpectedly at the top-level worlds. He’s totally cocky and self-assured and awesome to watch. Many believe he can be the next Jonathan Quick. Why not go crazy and get the kid a head start?

7. … But don’t forget about the 43-year-old man. Save Teemu. Every moment is precious. Just ask his son.

8. Do something about those uniforms. Seriously, they’re so awful, the worst in the league, the clear result of the pendulum swinging waaaay too far post–Disney sale from “height of ’90s commercial tie-in sad whimsy” (“eggplant” and teal; cartoon Jason Voorhees mask logo) to “if I blend into the cattails at the edge of this pond, the hunter won’t be able to shoot me.” Look at how psyched Perry looks in this photo at having to wear the thing, and that was on the day they unveiled it. They look terrible on TV.

It’s not even that the Ducks have to go full throwback or anything; I’d be all for it, but I acknowledge that “all parties involved unanimously decided to go beyond simply altering the original concept of an aggressive duck character.” Fair enough. But at least play up the orange; make the gold brighter and more yellow; and tone down all the black. (Seriously, California: What’s the deal with all the funeral-attire sweaters? You’re not Calvin Klein, and this isn’t New York.) Throw in some emerald-green accents if you’re feeling sassy. The logo is better than it was, but sometimes it screams cornball brass knuckle. I don’t think anything I’m saying here is controversial. If the Ducks want to survive natural selection, they should figure out how to better preen.

9. Hit Puck Daddy’s Greg Wyshynski in the face with a pie. OK, this really has nothing to do with the Ducks, but I just want to point out that the bidding is currently up to $1,125 to do that at Game 4.